Home ANNOTATED NEWS The Baseline Scenario: What Is Obama Getting?

The Baseline Scenario: What Is Obama Getting?

The deficit talks have everyone confused because Obama, as usual, is handing over the store to the other side and then some, while pretending to be involved in hardfought negotiations over principles he absolutely lacks. —Eds 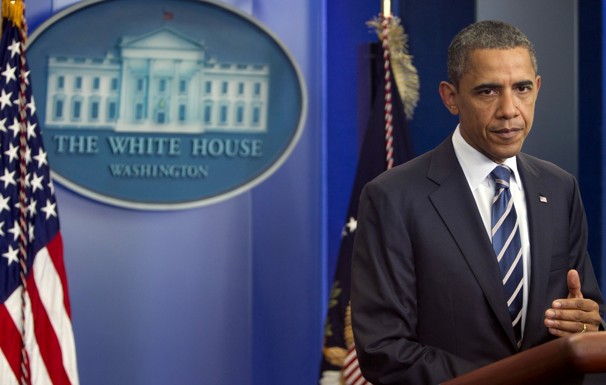 By James Kwak, The Baseline Scenario

Nothing, as far as I can tell.

The media are reporting the potential Obama-Boehner deal as $3 trillion in spending cuts and $1 trillion in unspecified future revenue increases. But as far as I can tell (details are vague), the baseline for that $1 trillion tax increase is a world in which all of the Bush/Obama tax cuts are extended.*

President Obama can personally guarantee that none of those tax cuts will be extended, simply by promising to veto any bill that extends them. That would increase tax revenues by $3-4 trillion over ten years, not $1 trillion. That is enormous bargaining leverage against a Republican Party that only cares about one thing: tax cuts.

So as far as I can tell, Obama is handing the Republicans $3 trillion in spending cuts, and also handing them $3 trillion in tax cuts. There are only two possible interpretations that I can think of. One: Obama thinks this is the best deal he can get — but if that’s the case, then you have to ask why his starting point wasn’t letting all of the tax cuts expire. Two: Obama thinks this is a good outcome.

But this certainly isn’t a progressive outcome. And giving up $3 trillion in revenues isn’t a fiscally responsible outcome, either. So what does that say?

WHAT SET OFF yesterday’s debt-deal panic among congressional Democrats wasn’t so much information about a new deal as a better understanding of the old deal. What Boehner and Obama appear to be discussing is the $4 trillion deal they were discussing a few weeks ago. In that deal, $1.5 trillion in immediate cuts would be followed by processes for making a further $1.5 trillion in deeper cuts — many of them to entitlement programs — and reforming the tax code to raise a trillion more dollars than it does now. The plan would also include some sort of enforcement mechanism that would make sure the future spending cuts and tax increases manifested.

Congressional Democrats spent much of yesterday complaining that this plan doesn’t really have revenues while the White House spent much of yesterday swearing that it did. On this, congressional Democrats are mostly right. The revenue in this plan is approximately equal to the revenue from letting the Bush tax cuts on the rich expire — which is something Democrats could do with zero Republican votes in 2012, when the Bush tax cuts are set to expire automatically. (Italics ours) In other words, Democrats are demanding, as part of this deal, that Republicans agree to let them do…something they could do even if Republicans refused to agree to it.

But that’s not new to this deal. That was true in the original $4 trillion offer Obama made to Boehner. If you want to read more on the thinking that led to the White House offering Boehner such a sweet deal in the first place, head here. What does appear to be new over the last 24 hours are some very odd reports about a trigger that would, among other things, unwind the individual mandate if the two parties didn’t make their scheduled cuts/tax increases over the next few years. That sounds more like Boehner’s spitballing than an actual part of the deal to me, but I’ve been wrong before.

Third possibility: Obama does not know what he is doing

Nemo
July 22, 2011 at 12:17 pm
Also, at this point every action he takes is about one and only one thing: November 2012. So whatever he did here must be analyzed from that perspective.

Nemo
July 22, 2011 at 12:20 pm
Simple: He’s getting the social security and medicare and whatever else is being-cuts he wants. That is what he is after, and that is why he refused McConnell’s free debt ceiling increase deal.
Consider: there was no reason whatsoever to turn this into a crisis, except that both parties wanted to turn it into a crisis. (It wasn’t just the GOP)

Yves Smith: “But this “all in” strategy is by design. Obama has long wanted entitlement “reform,” as in gutting; Paul Jay of Real News Network pointed out to me today that Obama told conservatives at a dinner hosted by George Will in the first week after his inauguration that he planned to turn to it once he got the economy in better shape.”

Why should granny have to give up any of her social security benefits when the scheisters who caused this mess get trillions of dollars from the Fed?

leftoverbacon
July 22, 2011 at 1:21 pm
Obama really had a lot of us fooled. His problem in 2012 will be that, when people figure out that he scammed them in 2008, they will make him pay either by staying home on election day (my current plan), or voting for the lunatic Republican. He’s about my age, way too young to retire, but it’s the lecture circuit for him in January 2013. Good riddance.

rjs
July 22, 2011 at 1:42 pm
@rjs: I am also skeptical that this deal will actually happen, but it does seem to be what Obama wants. I think that if Obama and Boehner strike a deal, the Democrats will be free to say to Boehner: “It’s your deal, you have the majority, so you pass it.”

James Kwak
July 22, 2011 at 2:06 pm
It certainly would be fitting if the giant gift Obama is trying to hand the Republicans (and I do agree with those who say he actually wants to gut social spending) was torpedoed by the same Tea Party that those Republicans nurtured in the first place.

I’m a bit puzzled by how Obama thinks he’s going to get re-elected next year with unemployment still sitting at around 10% and older Americans having just watched him help cut their Medicare and SS, no matter how many television commercials he can afford to buy. Especially if he ends up with one of the less obviously insane Republican candidates as his opponent.