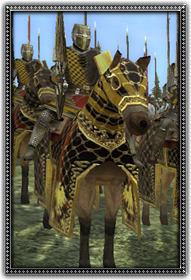 At the heart of feudalism is a basic idea common to any society with a warrior caste. Such men need to be provided for. In a simple economy this means that the produce of an appropriate number of peasants or serfs must underwrite the expenses of the fighting man. In ancient Sparta, where all free men are warriors, the support comes from the defeated and enslaved peasants of Messenia, known as the helots.

In medieval Europe the system is more complex. The central economic feature is the manorial system. Transcending that, and dependent upon it, is the interconnecting network of loyalties and obligations which make up feudalism.

Thus there develops the relationship between lord and vassal which is at the heart of feudalism. The lord gives the vassal an income-yielding fief (fehu-od in Frankish, the basis of the word ‘feudal’). The vassal does homage to the lord, formalizing the relationship.

The largest fiefs are those given directly by monarchs to noblemen or barons, who then subcontract parts of these fiefs to vassals of their own. Only in this way, sharing out both the benefit and the obligation, can the king’s vassals be sure of bringing their promised contingent of armed men into the field.

A pyramid of loyalty is thus created, in which each man – except at the very top and bottom – is a vassal to one lord and a lord to several vassals. At the very peak of European feudal society is the pope. By the end of the 12th century the papacy has more feudal vassals than any temporal ruler.

Get used to it…

Feudalism lasted from the 9th to the 15th century in Europe

Although feudalism develops as early as the 8th century, under the Carolingian dynasty, it does not prevail widely in Europe until the 10th century – by which time virtually the entire continent is Christian.

For the next 500 years, great accumulations of power and landed wealth pass between a few favoured players as if in a vast board game.

Orwell warned of a world where books were banned. Huxley warned of a world where no one wanted to read books. Orwell warned of a state of permanent war and fear. Huxley warned of a culture diverted by mindless pleasure. Orwell warned of a state where every conversation and thought was monitored and dissent was brutally punished. Huxley warned of a state where a population, preoccupied by trivia and gossip, no longer cared about truth or information. Orwell saw us frightened into submission. Huxley saw us seduced into submission. But Huxley, we are discovering, was merely the prelude to Orwell. Huxley understood the process by which we would be complicit in our own enslavement. Orwell understood the enslavement. Now that the corporate coup is over, we stand naked and defenseless. We are beginning to understand, as Karl Marx knew, that unfettered and unregulated capitalism is a brutal and revolutionary force that exploits human beings and the natural world until exhaustion or collapse. […..] Our manufacturing base has been dismantled. Speculators and swindlers have looted the U.S. Treasury and stolen billions from small shareholders who had set aside money for retirement or college. Civil liberties, including habeas corpus and protection from warrantless wiretapping, have been taken away. Basic services, including public education and health care, have been handed over to the corporations to exploit for profit. The few who raise voices of dissent, who refuse to engage in the corporate happy talk, are derided by the corporate establishment as freaks.

But the hopeful and ‘cheerful’ truth is:

The façade is crumbling. And as more and more people realize that they have been used and robbed, we will move swiftly from Huxley’s “Brave New World” to Orwell’s “1984.” The public, at some point, will have to face some very unpleasant truths. The good-paying jobs are not coming back. The largest deficits in human history mean that we are trapped in a debt peonage system that will be used by the corporate state to eradicate the last vestiges of social protection for citizens, including Social Security. The state has devolved from a capitalist democracy to neo-feudalism. And when these truths become apparent, anger will replace the corporate-imposed cheerful conformity. The bleakness of our post-industrial pockets, where some 40 million Americans live in a state of poverty and tens of millions in a category called “near poverty,” coupled with the lack of credit to save families from foreclosures, bank repossessions and bankruptcy from medical bills, means that inverted totalitarianism will no longer work.

Read all of it here:

It’s long past time for an American Awakening and Uprising, a broader and deeper Awakening than the Arab Awakening the US Government is doing it’s best to help quash.

There are 310 million Americans who, so far, are acting like they are outnumbered by a few thousand wall streeters, media moguls, insurance company and weapons manufacturer execs and other assorted ‘plutocrats’, 100 senators, 435 congresspeople, and maybe a couple of hundred in the US Administration.

Chris Hedges wrote about it.

The bankrupt corporate power elite, who continue to serve the dead ideas of unfettered corporate capitalism, globalization, profligate consumption and an economy dependent on fossil fuels, as well as endless war, have proven incapable of radically shifting course or responding to our altered reality. They react to the great unraveling by pretending it is not happening. They are desperately trying to maintain a doomed system of corporate capitalism. And the worse it gets the more they embrace, and seek to make us embrace, magical thinking. Dozens of members of Congress in the United States have announced that climate change does not exist and evolution is a hoax. They chant the mantra that the marketplace should determine human behavior, even as the unfettered and unregulated marketplace threw the global economy into a seizure and evaporated some $40 trillion in worldwide wealth. The corporate media retreats as swiftly from reality into endless mini-dramas revolving around celebrities or long discussions about the inane comments of a Donald Trumpz or a Sarah Palinz. The real world – the one imploding in our faces – is ignored.

The deadly convergence of environmental and economic catastrophe is not coincidental. Corporations turn everything, from human beings to the natural world, into commodities they ruthlessly exploit until exhaustion or death. The race of doom is now between environmental collapse and global economic collapse. Which will get us first? Or will they get us at the same time?

Ward Churchill wrote a book that much of what Hedges writes reflects.

There’s a good review of it here….and here.

Humankind [and everything else that lives, including the planet itself] is being systematically killed off by the capitalist class, via their poisoning of the air, water and food chain, as well as their heedless imposition of catastrophic climate change. Jensen poses the very reasonable question: are we willing to retaliate violently to save our own lives and those of our children and grandchildren?
________________
EDGER is a founding editor at ANTEMEDIUS, a writing collective dedicated to counterbalancing the influence of corporate propaganda.

OWS’ Goals, Strategies and Tactics — in the Movement’s Own Words