Home ACTIVISTS & HEROES OWS’ Goals, Strategies and Tactics — in the Movement’s Own Words

OWS’ Goals, Strategies and Tactics — in the Movement’s Own Words 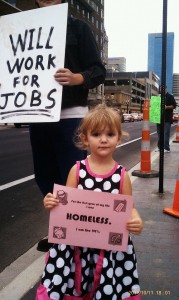 “The exhausted political machines and their PR slicks are already seeking leaders to elevate, messages to claim, talking points to move on. They, more than anyone, will attempt to seize and shape this moment. They are racing to reach the front of the line. But how can they run out in front of something that is in front of them? They cannot. For Wall Street and Washington, the demand is not on them to give us something that isn’t theirs to give. It’s ours. It’s on us. We aren’t going anywhere. We just got here.”-–Unsigned editorial, The Occupied Wall Street Journal, Issue 2

I’ve had occasion recently to review several Declarations of Occupation from U.S. cities large and small. Many are straight copies of Occupy Wall Street’s Declaration. The ones that differ, though they may not speak for all the movement, provide additional explanation and perspective upon the national messaging and plan of action of the movement.

These Declarations, approved by the General Assemblies of their respective cities, are the messages and talking points of the movement. At the present time, the movement’s most famous tactic, sleeping in tents in a visible public space, is under withering attack. Directly quoting the goals, strategies and tactics mentioned in these Declarations is one way to weigh the importance of tents for the movement.

Let us start with a word on the typical structure of these Declaration statements. In general, they follow the New York Declaration’s structure. They contain a short introduction of a paragraph or two describing who the authors are and how the present situation came to be. Then a list of twenty or so grievances follow. A short paragraph with a vision for creating a solution to the grievances follows, and finally, a very short call to action.

You’ll find links to all the quoted documents and others at the end of this summary, along with short characterizations of each individual Declaration.

But enough of my words…

The latter point about tactics, the call for assembly, could certainly be confirmed by the widespread and seemingly coordinated raids upon the occupation camps by local police forces. It’s not difficult at all to imagine an unfriendly analyst making a similar analysis to this one and then recommending a strategy of breaking up the movement’s ability to peaceably assemble. I believe, however, that the destruction of tents and semi-permanent structures as a tactic does not fulfill that strategy. It’s a simple matter for movement members to return during the day, without tents. Indeed, for some cities in the North, the authorities are probably doing the movement a favor; they could return for an “American Spring” far stronger than ever. It is worrisome, however, to consider that the authorities may realize that breaking tents is not effective, and that the militarized police forces may escalate to even greater levels of violence than those we have seen so far. America may see the return of the goon squads, as was once seen in the Pinkertons’ actions against the early labor movement. That would be another sign that the OWS movement is comparable to the great social movements this country has seen in the past.

A final word on the use of “goals, strategies and tactics” as an organization for this commentary. The military and the business sectors sometimes use these terms as a hierarchy to organize discussion of the why’s and wherefore’s of an overall plan of action. This is a link to a short article written by an Australian blogger which I found in a search. I thought that article might be helpful to anyone who may wish further reference as to the differences between the three terms.

Below you’ll find links and quick-take summaries on all the local Declarations of Occupation that I have found. Note that in cases where an occupation has adopted the New York Declaration with virtually no changes I have not listed them. These are in alphabetical order by city. I guess it’s just my inner librarian surfacing. My apologies if I have gathered some of the documents from unofficial sites; there may be cases in which the search results promoted such URLs much higher than the official ones.

This article originally appeared at scribillare.com.
_________________
ABOUT THE AUTHOR
In his own words:  “I am a professional in the computer field whose specialty is databases. I grew up, went to school in, and lived in New York for many years. I have lived in Florida for twenty years now, and it is a wonderful place to see and experience nature. My heart, these days, is in Costa Rica, and I try to follow it there as frequently as possible.”

Wars for Profits: A No-Nonsense Guide to Why the United States Seeks to Make Iran an International Pariah

WE’RE HEADED FOR AN UPRISING, BUT ARE WE READY FOR...