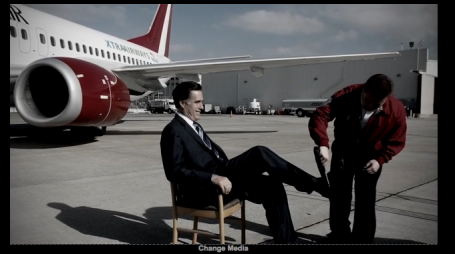 “A man of the people”.. getting shoe-shined in front of his private jet. Perfect reflection of a vibrant democracy. Only in America could a repulsive creature like this get this  far, with almost total impunity.

The attacks on Republican presidential frontrunner Mitt Romney over his role as the CEO of the private equity firm Bain Capital have produced a remarkable backlash in right-wing Republican circles and in the corporate-controlled media generally. Nothing has so reconciled the ultra-right to Romney’s likely nomination as the attacks by former House speaker Newt Gingrich and other Republican rivals on the predatory operations of the company Romney headed for 15 years.

Gingrich and Texas Governor Rick Perry began raising the issue of Bain Capital in the last days before the New Hampshire primary, as polls predicted an easy win for Romney in that state and for the first time gave him the lead in the upcoming South Carolina primary. Both criticized the private equity firm for profiteering from asset-stripping that left the targeted companies bankrupt and deprived workers of their jobs, pensions and health benefits. The two continued in this vein Wednesday as their campaigns moved to South Carolina, site of a steel company that was taken over and closed by Bain, with the pensions dumped on the federal Pension Benefit Guaranty Corporation.

The Wall Street Journal published an editorial Wednesday denouncing Gingrich and Perry “for their crude and damaging caricatures of modern business and capitalism.” The editorial continued: “Politics isn’t subtle, and these candidates are desperate, but do they have to sound like Michael Moore?”

The editorial noted that the Journal had political differences with Romney—because the former Massachusetts governor is insufficiently reactionary, in its view—but not with his business record. “Mr. Romney has a good story to tell,” the Journal declared, advising him to “base his claim to office on a defense of the system of free enterprise that has enriched America over the decades and is now under assault.”

Right-wing commentator Rush Limbaugh devoted his show Tuesday to defending Romney. “Capitalism is under assault here in the Republican Party,” he claimed, comparing the attacks by Gingrich and Perry to language of the Occupy Wall Street protests.

In his victory speech Tuesday night in New Hampshire, Romney made an open appeal for the various factions in the Republican Party to repudiate the criticisms of his Bain Capital role by his primary opponents. “President Obama wants to put free enterprise on trial,” he said. “In the last few days, we have seen some desperate Republicans join forces with him… This country already has a leader who divides us with the bitter politics of envy.”

In an appearance the next morning on NBC’s Today Show, Romney not only branded any criticism of Bain Capital illegitimate, he claimed that any criticism of economic inequality was the product of “envy” and amounted to “class warfare.” In response to fawning suggestions by interviewer Matt Lauer, Romney agreed that his opponents were betraying the commitment of the Republican Party to the free enterprise system.

While both Romney and the Wall Street Journal suggest that the Obama administration is “anti-business” and promoting “class warfare,” the reality is that the Democratic Party defends the interests of corporate America and finance capital just as assiduously as the Republicans, as demonstrated by its expansion of the bailout of Wall Street begun under George W. Bush.

Obama has packed his administration with ex-bankers, including every one of his White House chiefs of staff: Rahm Emanuel, who raked in $18 million during a brief tenure at Wasserstein Perella; William Daley, formerly Midwest vice-chairman of JPMorgan Chase; and now Jacob Lew, a former top official of Citigroup at its internal private equity unit. These individuals were just as ruthless and predatory in their financial operations as Mitt Romney.

Romney underscored this equivalence Tuesday morning on the CBS program “This Morning.” He declared that the Obama administration had proceeded in the same way in its reorganization of the auto industry as Bain Capital had in reorganizing smaller companies. “In the general election,” he said, “I’ll be pointing out that the president took the reins of General Motors and Chrysler, closed factories, closed dealerships, laid off thousands and thousands of workers. He did it to try to save the business. We also had the occasion to do things that are tough to try to save a business.”

The pseudo-populism of Gingrich and Perry is transparently phony. Today they are compelled to denounce Romney’s financial record to serve their own immediate political needs. But both have decades-long political careers serving the same corporate interests that they now choose to characterize as “vulture” capitalists.

The growth of parasitism and financial speculation is not a wart on the face of an otherwise healthy capitalism, but an essential aspect of the profit system in its advanced stage of decay. As World Socialist Web Site International Editorial Board Chairman David North pointed out in his 2009 lecture on “The Capitalist Crisis and the Return of History:”

“The operations of firms such as Kohlberg Kravis were not merely the product of personal greed. Rather, the decay of the industrial base of American capitalism found expression in the destructive activities of ‘Merchants of Debt’ such as Kohlberg Kravis and Drexel Burnham Lambert. While, as is shown by every index of economic activity, the global position of US-based manufacturing continued to decline precipitously, financial speculation became the principal means by which the American bourgeoisie enriched itself. In 1980, only 6 percent of corporate profits were realized in the finance industry. By 2005, the finance industry generated 40 percent of corporate profits. That is, the fastest way to accumulate wealth was not by engaging in production, but by staying as far away from it as possible.”

The exaggerated response from the Republican right to the campaign rhetoric of Gingrich and Perry demonstrates the acute sensitivity of the ruling class to any public reference to the seething class antagonisms in American society. (It is worth noting here that another Republican presidential hopeful, former senator Rick Santorum, declared during last Saturday’s debate in New Hampshire that “there are no classes” in America.)

The Occupy Wall Street movement touched a powerful chord among working people because it raised explicitly the question of economic inequality and the polarization of society between the 1 percent at the top and the rest of the population.

A survey released Wednesday by Pew Social & Demographic Trends confirms the growing consciousness of social divisions. The survey found that 66 percent of Americans saw strong or very strong conflicts between rich and poor, an increase of 19 percentage points from 2009. Another 23 percent saw some conflict, while only 7 percent said there was no conflict. The poll found that conflict between the rich and those struggling to survive was a bigger issue, in the minds of those surveyed, than conflicts among races and ethnic groups or between immigrants and those born in the United States.

Obama and the Democrats are well aware of the explosiveness of these social tensions. Hence their turn to the populist rhetoric denounced by Romney and the Republicans as “class warfare.” Obama, however, is defending the same class interests as Romney, only with slightly different tactics. His aim is to use the purely verbal acknowledgement of social divisions to disarm working people politically and thus enable his administration, or its Republican successor, to continue and intensify the pro-corporate, anti-working class program which is the consensus of both parties.

Why I Can’t Support the “Stop the Online Piracy Act”

Iran: the Neocons Are At It Again