It’s Not About Curing Breast Cancer 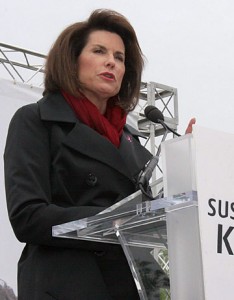 by DOUGLAS A. BERG

Nancy Goodman Brinker, a pioneer of “cause marketing”, founded Susan G. Komen For the Cure in 1982, reportedly as the fulfillment of a deathbed promise made to her sister, a victim of breast cancer. In 1994, Brinker founded In Your Corner, Inc., a for-profit company that markets health products and information. In 1998, Brinker sold In Your Corner to AstraZeneca, the third largest pesticide manufacturer in the world, primarily through Syngenta, a giant global agribusiness company it owns jointly with Novartis.

AstraZeneca has had close ties to Brinker for many years. It gave $97,000 to Komen and its affiliates in the first 6 months of 2008 alone, and it has been a big presence at Komen’s Race for the Cure. AstraZeneca is also one of the largest contributors to Breast Cancer Awareness Month.

The problem here is that pesticides cause breast cancer.

AstraZeneca solves the problem by no longer advertising itself as a pesticide manufacturer.  It is a “life-sciences” company. Ta da! Problem solved! Well, they still manufacture more pesticides than ever (substances that congregate in the sexual glands of mammals causing cancers, birth defects, etc., etc.,) but “life sciences” sounds so reassuring, yes?

Susan G. Komen has created a lengthy list of risk factors for breast cancer.  Nowhere in this list can you find exposure to toxins, probably the greatest risk factor of all.

Hey Nancy! Didn’t your sister ask you to cure breast cancer? Was her dying wish, “Please forgive them for killing me, pay yourself half a million dollars a year – and oh by the way please protect those poor pesticide manufacturers. They know not what they do.”

It gets worse. You’ve heard the famous slogan “The best prevention is early detection.” Think about it: If you get breast cancer, you didn’t see the doctor soon enough. Your fault. Next case.

No wonder AstraZeneca gives handsomely. The focus of Komen and pharmaceutical research is entirely on screening and treatment, not on prevention. In other words, “the cure” focuses on the symptoms and ignores the cause. Less than 5% of the total research dollars in this country are spent determining and eliminating the causes of cancer — none of that money, you can bet, spent by “life sciences” companies.

You have to hand it to AstraZeneca. Not only do they recognize and reward good propaganda when they see it, they also recognize a great market opportunity. Since the 90’s, AstraZeneca has bought up cancer treatment centers until it owns one of the country’s largest chains. With $13 billion in profits in 2011, it makes billions on oncology drugs, and it makes billions on pesticides and herbicides.

In business parlance, this is “vertical integration.” AstraZeneca causes cancer, they give money to charities that ignore the causes of cancer, and they “cure” us with their toxic drugs. An enviable business model–the worse the product, the more money they make.

And AstraZeneca isn’t the only culprit in this unholy alliance. General Electric is also a large contributor to Susan G. Komen. Mammograms have come under heavy criticism in recent years for needlessly exposing patients to radiation, and for yielding numerous false positives which often result in unnecessary surgeries. Unlike many doctors and charities, Komen continues to recommend annual mammograms. GE, not so coincidentally, is a huge manufacturer of mammogram equipment. Europe has a only fraction of the breast surgeries that occur in the U.S., and yet they have nearly identical rates of cancer deaths.

It is hard not to think of Komen as a pure propaganda ploy, and a great tool for supplying qualified prospects to the cancer industry. Is it any surprise that Nancy Brinker was a bundler of campaign contributions for George W. Bush and also a Bush Pioneer, a title that required making contributions of at least $100,000 to his Presidential Campaign? Is it surprising that the staff of Komen is stuffed full of right-wing extremists? Anyone surprised by Komen’s decision to drop Planned Parenthood?

If you are surprised, you’ve bought Susan G. Komen’s purported mission of “curing” breast cancer, rather than understanding the real mission of the cancer-industry and its supporters in the “life science” of killing insects with chemicals that also kill humans. Putting the spotlight upon this unholy alliance is making some very rich, very immoral people very nervous.

Expect a rash of corporate name changes and massive increases in public relations budgets if the attention lasts much longer. What one should not expect is any change in business practices.

Douglas A. Berg is a computer scientist and children’s book writer in Mesa, Arizona. He contributed this article to ThisCantBeHappening!, the new independent Project Censored Award-winning online alternative newspaper, which is available at www.thiscantbehappening.net

DEBATE: What’s the difference between eating plants and animals?

Saying Government-Funded Healthcare’s Too Costly is Nuts…Unless You...