Olympics: a celebration of globalized conformity to vulture capitalism 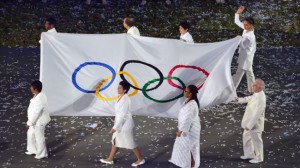 The Olympic Games, particularly the 2012 London Summer Olympiad, are a celebration not of amateur sports and universal human competition but of corporate greed, international conformity to the “new world order,” and global oligarchs and elites.

The modern Olympics were the brainchild of Baron Pierre de Coubertin, a member of French royalty, who believed that when he organized the first modern Olympics in Athens in 1896, it might help forestall a repeat of the Franco-Prussian War of 1870-71. Coubertin was not able to prevent another Franco-German war and in 1914, war broke out in Europe pitting the French and the Russian and British empires (and later, the Americans) against the German, Austro-Hungarian, and Ottoman empires. In 1936, the Summer Olympics in Berlin actually honored a resurgent militarized Germany under the Nazis.

The ancient Olympics, which honored the Greek god Zeus, were held during truces arranged between warring Greek city states. Athenians, Spartans, Elisians, Cyrenes, and others laid down their weapons on the battlefield to compete against one another on the sporting field. Today, there are no global truces to mark the Olympics but the military nature of the Olympics, with military honor guards at the opening and closing ceremonies, military aircraft fly-overs, and jingoistic media coverage by the United States and a few other nations, is, nevertheless, very much present.

What the modern Olympic games now represent is an affirmation of the new world order, globalization, corporatization, and neo-colonialism. Even de Coubertin’s stricture that “all sports must be treated on the basis of equality” and the most important element in the Olympic Games is participation, has been ignored by an IOC that also hypocritically stresses that there is no place for “politics” in the Olympics. The IOC is as political in nature as the United Nations, the elitist Bilderberg Group, and the North Atlantic Treaty Organization (NATO).

Whereas once it was simple for nations and territories to participate in the Olympics, now a litmus test is applied. In 1995, the International Olympic Committee (IOC), which is packed with royal personages and wealthy tycoons, decided that a nation must be sovereign in order to participate in the Olympic Games. Before 1995, a political entity merely had to have a National Olympic Committee and field a team.

Ten territories, American Samoa, Aruba, Bermuda, British Virgin Islands, Cayman Islands, Cook Islands, Guam, Hong Kong, Puerto Rico, and the U.S. Virgin Islands, were “grand-fathered” after the IOC rule change and continue to participate as Olympic nations. Exceptions were also made for Palestine, which was allowed to send athletes from Gaza and the West Bank, and Taiwan, which participates as “Chinese Taipei.”

In an era when European colonial nations are re-asserting their control over their dependencies and colonies abroad, the IOC has stepped in to validate neo-colonialism.

The IOC has adopted a political stance of only recognizing teams from those nations that the United Nations recognizes as member states. In 2011, the Netherlands Antilles, which was dissolved as a union of Dutch Caribbean territories, saw its National Olympic Committee disbanded.

The IOC ruled that athletes from Curacao, Bonaire, Saint Martin, Saba, and Saint Eustatius would have to participate as members of the Netherlands or Aruba teams. The decision was akin to saying that newly-independent South Sudan, which does not yet have a National Olympic Committee, would have to participate under the flag of its rival Sudan or neighboring Uganda. In the meantime, athletes from the former Netherlands Antilles and South Sudan participated in the London Olympiad under the Olympic flag. The IOC decided to walk in lockstep with Dutch neo-imperialism than in abiding by de Coubertin’s policy of equality for all nations and territories.

Scottish and Welsh athletes, who would rather participate in the Olympics as separate nations, refused to sing the English national anthem “God Save the Queen” at the London opening ceremonies. Scotland, which will hold a referendum on independence in 2014, has tried to enter the Olympics separately but has been rebuffed by the IOC politicians. Both countries participate in World and European Cup football as separate teams but the IOC considers itself an adjunct of the United Nations and similarly responsible for deciding what constitutes a sovereign state.

Scotland and Northern Ireland footballers, who participate in World and European Cup matches under their own flags were not included on the Great Britain team. The IOC remained mum and quite content to support continued English imperialism in the British Isles.

The IOC has also rejected participation of other National Olympic Committees, all unrecognized by the IOC as part of a policy that has been called by IOC critics as “amoral” or “selective” universalism. The IOC’s policy, heavily influenced by the “status quo enthusiasts” of the U.S. State Department, the British Foreign Office, and the United Nations, has prevented participation in the Olympics by teams from the British Caribbean territories of Anguilla, Montserrat, and the Turks and Caicos Islands.

The Tory-Liberal Democratic coalition government in London, backed by “New Labor,” has unabashedly re-imposed colonial rule on all three island territories. The IOC has also rejected participation by Macau (which has requested to compete as “Macau, China”; [Iraqi] Kurdistan; Somaliland; Abkhazia; Catalonia; Gibraltar; Kosovo; Native American nations within the territory of the United States; Northern Cyprus; French Polynesia; New Caledonia; Niue; and the Northern Marianas Islands. The IOC’s stringent stance has prevented the Danish-controlled Faroe Islands and Greenland from applying to participate in the Olympic Games.

The IOC is clearly part of the globalized effort to tamp down nationalistic fervor. However, de Coubertin’s universalism was once recognized by the IOC. In 1906, Crete, now part of Greece, participated as a separate team, and Rhodesia took part from 1928 to 1964.

The IOC is more interested in corporate sponsorships, supporters, and partnerships, with McDonald’s, Coca Cola, General Electric, Proctor & Gamble, British Petroleum, UPS, and Dow Chemical having more influence over IOC decisions than the sporting authorities of Scotland, Wales, and Catalonia combined. The Olympics have turned away from de Coubertin’s belief in universalism and toward vulture capitalism, as exemplified by the London Olympic opening ceremony guest Mitt Romney, and corporate-sponsored athleticism.

NBC, which is only interested in reaping huge advertising revenues from its exclusive rights to broadcast Olympic events over its NBC, Universal, and Telemundo networks, repeated earlier pathetic coverage of earlier opening ceremonies by featuring uneducated and jingoistic commentators continuously making snide and patently false statements about participating countries during the London “Parade of Nations.” According to the commentators, Uganda is best known for Idi Amin; Madagascar as the subject of a Disney animated film; Kazakhstan for the fictional movie character “Borat”; Albania for never having won an Olympic medal; and Denmark for a number of gold medals in badminton, a sport the NBC “talking heads” found unimportant.

The original Olympic spirit of full participation and universalism has been overshadowed by corporatism, globalization, politics, and petty squabbles over flags, country names, and the birthplaces of athletes. Perhaps it is time to scrap the “modern” Olympics altogether. Either return the Olympic Games to their roots of amateur sports, full participation, and universalism or put it on the shelf of history, where it collected dust from ancient Greek times to 1896.

Wayne Madsen is a Washington, D.C.-based investigative journalist, author and columnist specializing in intelligence and international affairs. He is the author of the blog Wayne Madsen Report. In 2002 he suggested to the Guardian newspaper that the United States Navy had aided in an attempted overthrow of Venezuelan president, Hugo Chavez. In 2003 he said that he had uncovered information linking the September 11 attacks to the government of Saudi Arabia as well as to Bush administration. In 2005, he wrote than an unidentified former CIA agent claimed that the USS Cole was actually hit by a Popeye cruise missile launched from an Israeli Dolphin-class submarine. More articles by Wayne Madsen

Hit us when we’re down.