The Animal File: Mascot oxen to be killed for burger meat

Editor’s Note: We have received information of an urgent nature on the case of two animals slated for death unless public opinion is mobilized to force the current authorities to do the right thing.  We ask simply this: Why is it so damn difficult to do the compassionate thing in a world awash in cruelty and systematic violence?  One would think that people engaged in teaching, of all things, would welcome an opportunity like this to amend—at least in part—the savage record accumulated by the human race in its dealings with other animals and members of its own species. The information stream about this case is furnished by Marc Bekoff, a noted ecologist and Valerie Traina, a leading animal defense activist. The main point is that the decision to kill Bill and Lou is entirely unnecessary and heartbreaking because they have an excellent home waiting for them. VINE Sanctuary has offered to provide Bill and Lou with permanent homes. They have the ability and resources to care for them for the rest of their natural lives. Sadly, though, the college is determined to kill them instead. We earnestly hope that the officials at Green Mount College will choose to spare these animals their lives, even if such an act would violate their stated principles. No law or regulation must ever be implemented rigidly, and the whole process of trial and sentencing is based on the idea that laws are to be adjusted according to specific circumstances—especially when the “defendants” stand to lose their lives.—PG 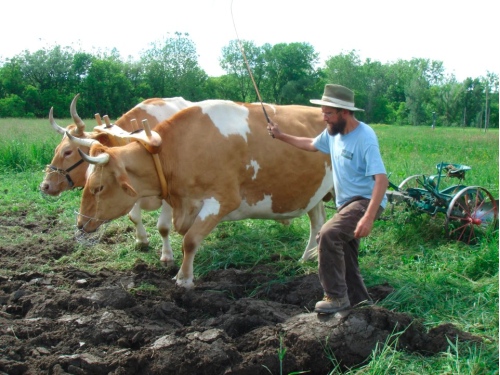 Bill and Lou will be turned into burgers
Published on October 12, 2012 by Marc Bekoff, Ph.D. in Animal Emotions

Bill and Lou are two oxen who have lived and worked on the campus of Green Mountain College in Poultney, Vermont for ten years. Now that they are old and can no longer work the college plans to kill them at the end of the month and turn them into burgers despite the fact that VINE sanctuary has offered to have them live there for free.

Oxen are highly emotional and sentient beings and this is downright heartless slaughter, pure and simple. It is not euthanasia, or mercy killing, because Bill and Lou are not suffering or in pain.

We must do all we can do to save, rather than to slaughter, sentient beings. Please write to Bill Throop, Provost and Vice President for Academic Affairs, at throopw@greenmtn.edu and copy your letter to Kenneth Mulder, Farm Manager, Research Associate and Adjunct Assistant Professor of Environmental Studies at mulderk@greenmtn.edu. A sample letter can be found here.  Cruelty can’t stand the spotlight so please express your opinion as soon as possible.

The teaser image of Bill and Lou and Kenneth Mulder with a whip can be found here.

Marc Bekoff, Ph.D., is a former Professor of Ecology and Evolutionary Biology at the University of Colorado, Boulder, and co-founder with Jane Goodall of Ethologists for the Ethical Treatment of Animals. He has won many awards for his scientific research including the Exemplar Award from the Animal Behavior Society and a Guggenheim Fellowship. Marc has written more than 200 articles, numerous books, and has edited three encyclopedias. His books include the Encyclopedia of Animal Rights and Animal Welfare, The Ten Trusts (with Jane Goodall), the Encyclopedia of Animal Behavior, the Encyclopedia of Human-Animal Relationships, Minding Animals, Animal Passions and Beastly Virtues: Reflections on Redecorating Nature, The Emotional Lives of Animals, Animals Matter, Animals at Play: Rules of the Game (a children’s book), Wild Justice: The Moral Lives of Animals (with Jessica Pierce), and The Animal Manifesto: Six Reasons For Increasing Our Compassion Footprint. In 2005 Marc was presented with The Bank One Faculty Community Service Award for the work he has done with children, senior citizens, and prisoners. In 2009 he was presented with the St. Francis of Assisi Award by the New Zealand SPCA. His homepage is marcbekoff.com and with Jane Goodall http://www.ethologicalethics.org/. Twitter @MarcBekoff

There are two letters attached from Baylee Drown, the farm manager at Green Mountain College in Vermont where they are poised to slaughter two oxen. If you read the Steveletter first (he’s a so-called professor of ethics there; this document also has the opinion of Kevin Coburn, director of communications), you’ll note that they don’t want to send the animals to VINE Sanctuary because they claim the sanctuary is sanctimonious and has said negative things about the college.  Apparently, his poor little feelings were hurt. In short, for political reasons, they don’t want to hand over the oxen.

Please read the letters and respond to Baylee Drown at: drownb@greenmtn.edu
S/he is standing in for Prof. Mulder, who is on vacation this week.

I’ve already responded. (If you’re interested in my response, I’ll send it to you.)
The letters are infuriating. It’s “might makes right” with these guys.

Thanks for standing up for Bill and Lou.

As a moral vegetarian, I am extremely sympathetic to your opinions regarding the fate of Bill and Lou. I am personally against consuming meat, but I support sustainable animal agriculture, as many domesticated animals would not exist without the demand for their products. Bill and Lou are a product of animal agriculture, and their fate was statistically sealed since birth. Bill and Lou are a by product of the dairy industry, their mothers were Guernsey dairy cows kept for milk production. Most bull calves only live for a short while after birth, either being eaten as veal, or corn finished beef at 18-22 months of age. Because Bill and Lou found their way to our grass-based, diversified, 22 acre farm, they were granted an extension, because they were able to find another purpose other than consumption at a young age. Our use of Bill and Lou has granted them a 10 year extension to enjoy expressing natural behaviors and experience the pleasure and pain of existing on earth.

As I read many objections to Bill and Lou’s processing into meat, it makes me sad to reflect that Bill and Lou, who have experienced an excellent quality of life, are the center of attention when so many bull calves are processed into veal without ever having a chance to live to maturity. I am saddened even more when I think of all of the beef and dairy cattle that are kept in feedlots or exclusively in barns. Seeing Bill and Lou living outside for many years has given me great satisfaction. I think our farm practices animal production in the most ethical way possible. Our students know where their food comes from. They are faced with the reality that their meat was once living and breathing- and they should be concerned with how their food was raised. Eating meat with a name is one way we make certain consumers face the reality and seriousness of taking an animal’s life for their meat. Our community feels strongly that honesty and connection with food is essential for decentralizing the food system and rebuilding local systems.

Bill and Lou are valuable to our community. We will continue to respect their contribution to our community as their purpose changes. We have the ability and resources to bring them to an Animal Welfare Approved Processing Facility. I will personally accompany them to the facility, ensuring their handling is appropriate and calm.

I appreciate your consideration for Bill and Lou. I also urge you to consider your dietary choices, realizing that every beef animal is just as capable of experiencing pain and pleasure as Bill and Lou. However, most of the beef cattle in our food system do not have the luxury of grass diets and a long life. I hope if you do choose to consume meat, you consider every life as important as Bill and Lou’s. If you do not choose to consume meat, I urge you to focus your attention on the parts of our food system that truly exploit the essence of domestic animals, rather than small, diversified farms that strive every day to uphold values of animal welfare.

I’ve read your enclosed letters. I have been advocating on behalf of farmed animals for 25 years. I’ve been a vegetarian for most of that time, and a vegan for the past few years. What you and the rest of the Green Mountain College community have neglected in all your talk on ethics is the interests of Bill and Lou. You cannot pretend to be their proxies. I am the guardian of six cats. I take my moral duty toward them seriously. They see the vet when they are ill. They are medicated when necessary. Toward the very end of their lives when there is no hope for quality of life, they are euthanized. My home IS a sanctuary. In Green Mountain’s case, you have a sanctuary lined up willing to take in the oxen. For political reasons that sound like hubris (based on the professor’s letter), you’ve decided not to permit their transfer to safe haven.

That is shameful. I don’t know how you can live with yourselves. The oxen certainly don’t wish to die now. And they absolutely don’t want to experience violent slaughter. Please put yourself in their bodies and imagine how happy you would be to live out your life in a sanctuary. Likewise, imagine how frightening it would be to be slaughtered, and how shocked you’d be to be killed after rendering service to your community.

Dear Bailey Drown, as Prof. Mulder is on vacation, please see the letter below. It is of an urgent nature.
Thank you.

I write today to urge you to send Bill and Lou to VINE Sanctuary to live out the remainder of their lives. Compassion is the highest of all human values, as taught by every one of the great spiritual teachers and Humanist philosophers.

These animals have worked hard for Green Mountain College, and now it’s time for their retirement. It won’t cost the college a dime, and it will show your fellow Vermontans that you truly care for all of the animals on your farm. In fact, it will show the entire country that the administration has a heart. This is much more valuable than providing hamburgers for the kids. These animals were like working dogs. Would you suggest we slaughter working dogs when they become too frail to round-up sheep? You speak of humane farming. Well, there is no such thing as humane slaughter. That is an oxymoron. The VINE administrators will do everything in their power to keep these oxen alive. They are sure to thrive in a loving environment. Then, when the time comes to say goodbye, VINE will euthanize the animals – that is, they will give them a “good death.”

Believe me when I say that there are thousands of people watching what you are doing in regard to Bill and Lou.

What you ultimately decide to do in this situation could either make people admire you, or be revolted. You could so easily either enhance or tarnish your college’s reputation.