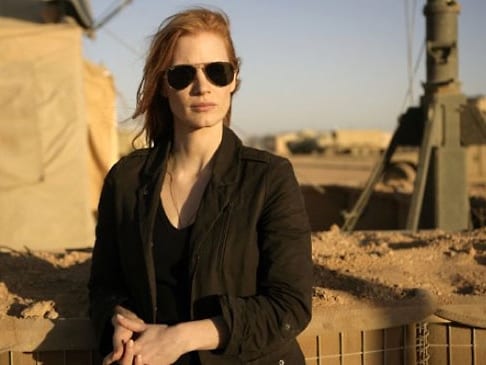 Jessica Chastain as Maya, the obsessed linchpin in the hunt for Osama.  Both the actress and the character she plays remain moral ciphers. This is the fifth review we run on this film, and probably we’ll run more, as it is a defining example of smooth imperial propaganda. —Eds.

I have visited this major blot upon the US escutcheon a number of times over the past five years (1-3). (Why there are so many blots one could visit and re-visit is a topic for another time.) One would have thought that it was dead and buried, along with the Cheney-Bush regime. In 2005 Bush himself had actually said that torture would not be included in the US armamentarium for dealing with enemies, perceived and real, (not a policy endorsed by the arch torture-facilitator Cheney), and President Obama had announced the renunciation as official US government policy. But now we are forced to revisit the subject by the new propaganda-shtick, Ooops, sorry, I mean movie, “Zero Dark Thirty.” For what she has done in re-justifying the use of torture, some have even compared Kathryn Bigelow apparently from the technical side a fine film-maker, to Leni Riefenstahl, the Nazi-era photographer, who was indeed a fine photographer.

Bigelow also glorified the Iraq War in “The Hurt Locker,” which allowed the Academy of Motion Picture Arts and Sciences to shoulder aside “Avatar,” one of the truly cinematographically-great movies of all time, which also happened to be anti-capitalist and pro-environmental preservation. Actually, I think comparing the two is an insult to the memory of Riefenstahl, who died at the age of 101 in 2003. She may have glorified the infamous Nuremberg rallies and the Nazi regime in general, but she never took any photos glorifying the Gestapo’s torture chambers.

Like Glen Greenwald (4), I am not writing a movie review here (and indeed I have no intention of seeing the movie). I am dealing with the self-proclaimed justification of torture as an instrument of US “intelligence-gathering” policy (which justification Bigelow is now scurrying around to deny. She was only presenting the “facts.” But whether they are indeed “facts” is part of the problem. However, it is only part of the problem, as I will show later in this column.) The movie has suddenly re-opened the debate on whether torture “works” for intelligence gathering, and thus is “justified” as a part of US policy (discarded or not). One would have thought that indeed the argument was settled (despite its effectiveness for Jack Bauer in “24”). Among other journalists, Massimo Calabresi summarized and disposed of the subject very well in two articles in, of all places, Time (5, 6). No, it doesn’t “work,” and at times can be counter-productive. And there is a still-secret Senate committee report that summarized all of the evidence and arguments against its use very well.

But I think that there is a larger picture that must be taken into account here, when considering the use of torture by agents of the US government, whether US or of other governments under contract to the US. For many months, back when Cheney was glorifying “enhanced interrogation techniques” (oh those right-wing wordsmiths, Goebbels would have been proud), the torture debate was focused to a significant extent on the issue of whether it “works” or not for eliciting useful intelligence from captured military operatives, quasi-military operatives, suspected terrorists, or people caught in some “anti-terrorist” dragnet who might well have nothing to do with the activity. To repeat, virtually every expert on gaining useful intelligence from captured operatives “from the other side,” whatever their particular classification might be, said that it didn’t (5, 6). One must note that there were a handful of non-experts in addition to Cheney who thought that torture does “work.” Take for example the prominent Christian-Rightist Gary Bauer. Bauer stood in favor of the use of torture along with a number of other Christian Rightists for whom the fact that Christ himself was tortured to death by the Romans (who used crucifixion to punish their enemies over a period of centuries) seemed not to be of import.

Of course there was never any reason to think that the torture techniques put together by Dick Cheney and his staff and specifically approved for use by President Bush (so Cheney has told us, quite publicly) would “work,” in terms of gaining useful intelligence. After all, the techniques specified for use, as we know in (literally) painful detail from the post hoc memo written by “Judge” Bybee, were, as almost everyone knows, drawn from a torture program used on captured U.S. servicemen by the Chinese People’s Liberation Army in North Korea over 50 years ago. It is also well-known that these techniques were specifically designed to elicit false confessions, not useful intelligence, from the U.S. POWs. On that level, it was successful.

Now this is not to say that torture is never useful. In fact it is very broadly useful, as an instrument of repression. Brought to its highest level of use as part of state policy by the Nazi Germans, the Franco and Pinochet regimes, among many others, it is very good for: terrorizing one’s own population to repress dissent; extracting information from politically active civilian regime opponents; carrying out extra-judicial punishment of regime opponents; repressing potential opposition in militarily occupied territories; extracting false confessions from non-military persons, as in the Stalinist show trials of the late 1930s; helping to establish a record of lawlessness, of total disregard for the rule of law, as long as the regime says things such as, “We are doing what we are doing in order to keep our people safe and fight terror.” For this last one, we need look no further than our own doorstep, of course.

As for whether what the Georgite regime did in terms of torture was really “torture,” Judge (sick) Bybee and Professor (sick) Yoo attempted, in very legalistic language, to define what they authorized as “not torture.” This causes one to turn to the Geneva Conventions and the UN Convention Against Torture to see what they say about it. Unfortunately, neither document defines “torture” in any sort of the detail in which Judge (sick) Bybee did. The authors of the Geneva Conventions just assumed that everyone “knows” what it is, and the UN Convention defines it in general terms as “Any act by which severe pain or suffering, whether physical or mental, is intentionally inflicted on a person for such purposes as obtaining from him or a third person information or a confession . . .”

According to Judge (sick) Bybee, techniques from waterboarding to repeated slamming against walls (even flexible ones) don’t come under that definition. Alberto Gonzales (remember him? Yes, he was one of GW Bush’s most memorable Attorney Generals) did the same thing when, at the beginning of the controversy, he advised the President that doing what they wanted to do was OK because the Geneva Conventions were “quaint.” However, if one doesn’t think that what one is doing is torture, why even mention the Geneva Conventions? But here comes the rub, and here comes the central argument against the use of torture by US agents, even if torture did “work” for, say, intelligence gathering.

It just so happens that under article VI of the U.S. Constitution, as treaties signed and ratified by the U.S. government both Conventions are part of “the supreme law of the land and [further] the judges of every state shall be bound by them.” There it is: by the two treaties cited above, signed and ratified by the US government, the use of torture is banned. And so the “yes it does work, no it doesn’t” argument is a VERY dangerous, very WRONG one to get into. Why? Because it plays right into the hands of the pro-torture folks.

For suppose, just suppose, that it did work in terms of intelligence gathering from military operatives? Suppose it did work specifically in the ticking time bomb scenario, a la “24”? Why then, according to that argument, torture by the U.S. would be OK, no? Well, NO. The central issue is not whether torture works for those purposes or not. The central issue is, as above, that the use of torture is prohibited by the Constitution’s Article VI. Indeed, Bush, Cheney, Bybee, Yoo, Addington, and every other Georgite official who took part in the authorization of the use of torture violated the Constitution in general and their oath to uphold it in particular. That is the argument that our side should be using over and over again, as we struggle mightily to re-establish the Rule of Law and Constitutional government in our great nation. And that is the argument we should be using to attack the pro-torture propaganda of “Zero Dark Thirty.”

ABOUT THE AUTHOR
Protean by temperament, Steven Jonas, M.D., MPH, has written more than thirty books and a vast number of essays on various subjects ranging from medicine to politics. He serves as a senior contributing editor for The Greanville Post and a contributing author for BuzzFlash@Truthout, among several other leading venues, and has recently completed a revision of his true fiction novel “The 15% Solution,” currently scheduled for publication in early 2013 by Punto Press.