On Women in Military Combat 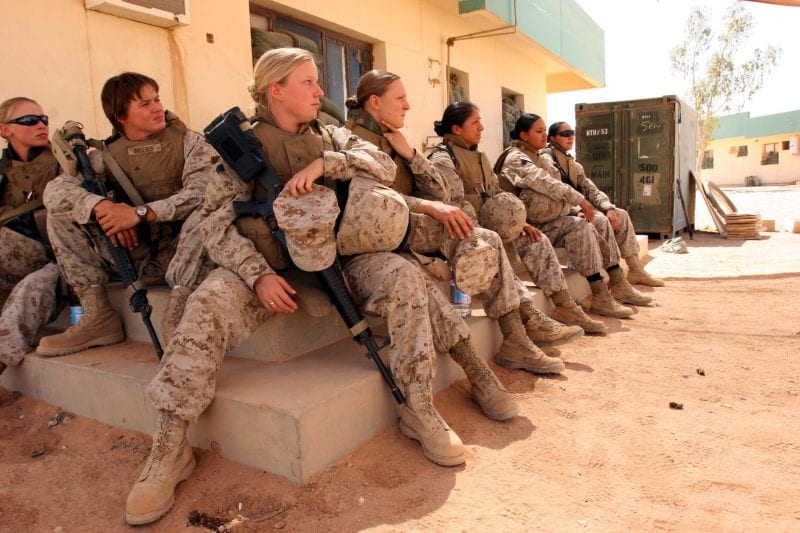 Women who choose to pursue a combat role in the military are not fighting for their country, but for imperialist expansion.
Crossposted with OpedNews
::::::::

There is extensive news coverage of the announcement yesterday by Defense Secretary Leon Panetta that the military will end its ban on women serving in combat.  Except for extreme conservatives, nearly everyone, including the party that expanded the war in Vietnam–the Democratic Party–and its supporters in the mainstream media (MSM), seems very happy with the prospect of women being fully integrated into the America’s war machine.

I, too, am a feminist, but I am utterly appalled at the direction of this discussion about women in combat operations has taken.

We need to ask ourselves why we are sending women or men into combat in distant lands.  Is it really for freedom and democracy, either there or here, or is it so that we can have oil and gas in our cars, uranium in our reactors, and bananas on our breakfast table?

I don’t want women going off to distant lands to fight so that big corporations can mine coltan in someone else’s country, even though I like the convenience of a cell phone. And I don’t want anybody, male or female, fighting wars for oil, even though I drive a car.  I will be very glad when we depend on renewable resources for heating our homes and driving our cars instead.

And I want men and women back in this country building bridges, teaching in classrooms, and growing good food for human beings, not shooting people who simply want the right to live in their own country in their own way. I cannot forget that one of the most searing photos of Abu Ghraib was of female soldiers humiliating Iraqi prisoners. It is not the kind of equality I want to see if women are equally culpable of war crimes.

The traditional reason for not having women fight except in a desperate struggle against annihilation is because women represent the tenderness and loving care that is necessary to raise infants. Such qualities are often considered to be incompatible with shooting and killing living beings.  Now, instead of creating sensitivity in our men, so that they, too, will be more aware of the value of life, we have–as a society–chosen a different kind of equality: that of making women equally insensitive to the value of life.

Let us not fool ourselves:  while “support” roles, which traditionally have been given to conscientious objectors and women, can appear to be consistent with humanitarian values (even though the soldiers doing them still have to go through the dehumanization of boot camp), killing for a living does not contribute to creating human values in either men or women, although a few souls do come back from war with an understanding of just how terrible taking a human life is.

But how many men come back from war shattered by their experiences?  How many veterans have you seen on the streets, unable to hold down a job or even form coherent sentences, because of the trauma of killing and watching their comrades be killed?  How many men can never father children because they were exposed to depleted uranium in the Middle East? And how many men come home so angry, so bitter, and even so dehumanized that they shoot and kill their wives and sweethearts?

Our country is not on the verge of being conquered by a merciless foe.  Our homes are not being invaded by a ruthless enemy and we are not watching our children be killed by jack- booted thugs who storm the driveway and kick in the doors.  If this were the case, then everyone should be called upon to defend the country and women as well as men should be expected to grab whatever weapon was available and fight off the threat.

Instead, now women will have the privilege of being those jack-booted thugs, of storming family compounds in Afghanistan and Mali, and kicking in the doors of frightened villagers in any other nation that dares to demand that we leave them and whatever natural resources they possess alone.

So, to the women in the military who want equal pay for equal “work” (the work of killing innocent civilians and people resisting our tyranny), to the women who want the privilege of an equal share when retiring on the taxpayer’s dime, I have this to say:

“You need to be clear with yourself that you are not fighting for America’s freedom or for the freedom of the people in whose country you have been stationed. You are fighting for big corporations, for oil and for Israel. If you choose to insist that you want equality, then that is your choice and your problem. But do not choose blindly: by participating in what some of us consider illegal and immoral wars, you are choosing material benefits at the cost of other people’s freedom. You will get shot at by people who are fighting invaders and those of us who oppose wars of aggression will have no more sympathy for you than we did for Vietnam veterans, who at least had the excuse that they were drafted and forced to serve.”

The Final Call: Nature’s Capital is the Limiting Resource