Home AMERICAN STUDIES Obama Inherits and Normalizes the Arrogance and Impunity of Nixon, Reagan and Both Bushes

Obama Inherits and Normalizes the Arrogance and Impunity of Nixon, Reagan and Both Bushes 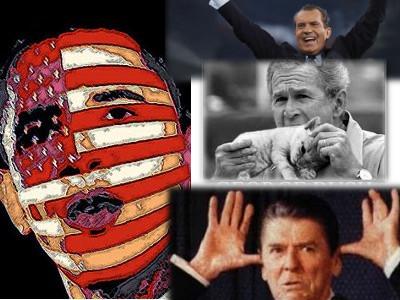 A Black Agenda Radio commentary by Bruce A. Dixon

When Republican presidents Nixon, Reagan and Bush waged secret wars based on mountains of lies and deceit, they were nearly impeached, but in each case Democrats in control of Congress could not pull the trigger. As a result, the Obama White House basks in a presidential culture of murderous arrogance and lawless impunity.

Obama Inherits & Normalizes the Arrogance, and Impunity of Tricky Dick Nixon, Ronald Reagan and Both Bushes

Back in the early seventies, when Richard Nixon secretly bombed Laos and Cambodia, two countries the US was not at war with, and concealed it from Congress and the public, the crime was serious enough to be the fourth article of impeachment drawn up against him. A dozen years later, when Ronald Reagan defied Congress to wage a bloody contra war in Central America funded by running drugs into the US [2] from Central America and selling arms to Iran [3], Reagan only avoided impeachment by pretending he just couldn’t remember much of it any more and letting his henchmen take the fall. George W. Bush too was widely reviled as a murderous fraud for his lies about Iraqi weapons of mass destruction and more, with millions of Americans and millions more around the world protesting his invasion of Iraq before it even began.

But in the end, none of these Republican warmongers were impeached while in office or indicted afterward because Democrats, in control of Congress every time, could never bring themselves to pull the trigger. So Tricky Dick Nixon stepped down. Reagan doddered off to the ranch, and Dubya’s at home right now watching American Idol. Barack Hussein Obama may be a different color and from a different party but he inherits their arrogance, their immunity, their impunity.

This White House openly brags about its “Terror Tuesday” meetings in which US special forces and drones have been dispatched to and from dozens of undisclosed countries to kidnap, torture or murder thousands of people, in the case of drone strikes mostly innocents, to the cheers and jokes of cruise missile liberals like Ed Schulz and Bill Maher, who calls Obama the “black ninja president.” The potent symbol of a black face in that high place has normalized the conduct of lawless aggressive war and secretive state murder among parts of the population which had no trouble calling a crime a crime when committed by a white Republican. In that sense, the First Black President is a little bit unlike, but mostly very much like his nefarious predecessors.

It’s worth noting that in the debates between Mitt Romney and Barack Obama, kill-at-will drone wars, the militarization of Africa, Wall Street’s immunity from prosecution, and the push to privatize and charterize public education were points upon which both candidates were in complete agreement. But if Mitt Romney were president today wouldn’t many more of us be in the street about these things? Black apologists, as Davey D notes [4], try to shut criticism of this president down in the misguided name of black unity, and some white activists stay home because they don’t want to be seen as racist whites hating on the black president.

A Facebook friend in Atlanta remarked last week that whenever George Bush was rumored coming to town, his inbox would be full of emergency mobilization notices. But with the current War President about to visit, he said, it looked like his only correspondent might be the Atlanta Journal-Constitution.

It’s going to be a long, long four more years.

For Black Agenda Radio, I‘m Bruce Dixon. Find us on the web at www.blackagendareport.com [5].

Bruce A. Dixon is managing editor at Black Agenda Report, and a member of the state committee of the Georgia Green Party. Contact him via this site’s contact page, or at bruce.dixon(at)blackagendareport.com.

HITCHENS VS. PARENTI on Iraq & the future of US foreign policy