The state killing of Ibragim Todashev 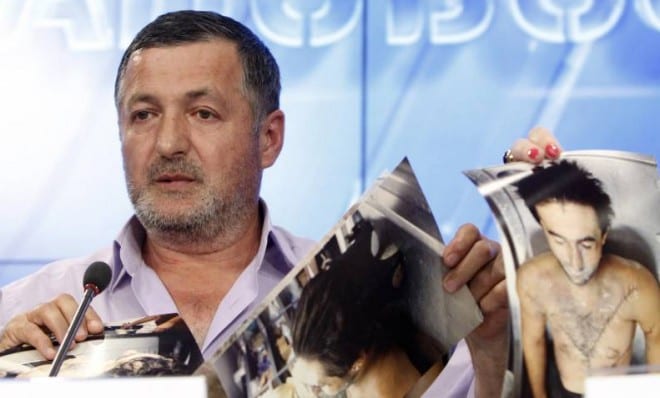 On May 22, Ibragim Todashev, a key witness in events related to the Boston Marathon bombings, was killed by an FBI agent in his residence in Florida. Todashev, an alleged acquaintance of bombing suspects Dzhokhar and Tamerlan Tsarnaev, was unarmed and in custody when he was shot as many as seven times, including once in the head.

This extraordinary event, which has been largely buried in the US media, stinks of a cover-up, deceit and criminality. Four or five completely different accounts of the killing have been presented by the government in the space of little more than a week. None of these accounts can be believed.

The killing of Todashev occurred just over a month after two bombs detonated near the finish line of the Boston Marathon, killing 3 people and injuring 264. Within a short period of time, the public was told that the perpetrators had been identified. Soon after, Tamerlan, 26, was shot and killed by the police. His brother Dzhokhar, 19, was severely wounded while hiding unarmed in a boat.
[pullquote] The media’s limp response to this story amounts to a de facto coverup. [/pullquote]
In the days following the bombings, the city of Boston was placed under effective martial law. In a massive and unprecedented police-military operation, the population was ordered to “shelter in place,” armored vehicles were deployed in the streets and heavily armed SWAT teams conducted house-to-house searches without regard for basic rights.

In the aftermath of the Boston events, it emerged that the elder Tsarnaev—like almost every individual who has perpetrated or attempted to perpetrate a similar act—was long known to intelligence agencies and was possibly connected with them. Detailed warnings had been provided by Russia, and these warnings had been ignored. It also emerged that a close associate of Tamerlan, along with two others, had been murdered on the tenth anniversary of the September 11, 2001 attacks, a year and a half before the bombings.

It was under these conditions that a person who knew the Tsarnaev brothers and had potentially vital information was located in Florida. Yet before this key witness could be publicly questioned, and before he was charged with any crime, he was shot and killed by an FBI agent under extremely dubious circumstances.

On the day of Todashev’s death, without a lawyer present, and presumably without regard for his Miranda rights, at least four federal and local agents spent eight hours with him in his home, supposedly seeking to extract a signed confession to the murders committed before the Boston Marathon.

Before this interrogation, Todashev told his roommate, who was also questioned, that he feared for his life.

Todashev’s father, at a recent press conference in Moscow, claimed that morgue photos prove that at least some of the shots must have occurred while his son was on the ground, with the shooter standing over him. Speaking in Russian, the father described the shot to the head as a “control shot,” i.e., a mafia-style point-blank shot designed to ensure that the victim is dead.

In the aftermath of the incident, a series of mutually and internally contradictory official stories regarding Todashev’s final moments was released and dutifully repeated by the American media.

First, the line was, as the Associated Press reported it, that “law enforcement officials say [Todashev] was shot…after he lunged at an FBI agent with a knife.” The FBI agent was reported to have sustained “non-life-threatening injuries.” However, it was later acknowledged that there was no knife.

No account has been given as to why officials reported the existence of a knife when there was none. Instead, a series of new accounts was provided, each more incredible than the last. One version, reported by an Orlando television station, had Todashev lunging for the agent’s gun. In another, reported by ABC News, Todashev lunged for a “samurai sword” that was somehow left within his reach.

In a Fox News affiliate’s account, Todashev actually retrieved the samurai sword (not a real sword but a wall ornament) and lunged at the agent with it.

According to the latest account, published in the New York Times, Todashev attacked the FBI agent with a “metal pole” that “might have been [?] a broomstick.”

The “reaching for a weapon” story is a favored and familiar trope in police department “investigations” seeking to justify shootings of unarmed people.

There are other unexplained and contradictory statements. The Washington Post on May 29 reported that for some unexplained reason, right before the murder, all of the other interrogators withdrew and left the FBI agent alone in the room with Todashev.

The New York Times account the next day places another unnamed agent in the room. This agent, according to a high-level official cited uncritically by theTimes, never fired his weapon, supposedly because he was worried about injuring his fellow agent in crossfire. This apparently was not of concern to the person who killed Todashev.

Neither the FBI agent who shot Todashev nor anyone else involved has been named publicly or detained for questioning.

There is a far more likely explanation for Todashev’s killing than the ad hoc and preposterous stories in the media: Todashev possessed information about alleged Boston bomber Tamerlan Tsarnaev—perhaps, we strongly suspect, about his relations with US intelligence agencies—that would undermine the official story. At some point in the lengthy interrogation, the agents in Orlando received orders, probably from someone in Washington, to terminate Todashev “with extreme prejudice.”

The killing of Todashev casts even more doubt on the entire official line regarding the Boston events.

Last week, the Russian Federal Security Service claimed that it had provided the American authorities with enough detailed information to prevent the Boston bombings. This fact was acknowledged by US Representative William R. Keating after a trip to Moscow.

Keating, in his statements in Moscow, further acknowledged that the Russian intelligence agencies had asked to be tipped off if the elder Tsarnaev visited Russia. The American agencies have not explained why they did not do so, or why they allowed Tsarnaev to travel in and out of the US to Chechnya without questioning.

As in the case of the September 11, 2001 attacks nearly 12 years ago, the conduct of the American intelligence agencies cannot be explained as a failure to “connect the dots.” That such agencies—funded to the hilt pursuant to the “war on terror”—were entirely oblivious to what was going on under their noses strains credulity. Further, if someone had simply “dropped the ball” within the American intelligence agencies, then resignations, firings or even prosecutions would be expected. Instead, nobody has been named and nobody has stepped down.

Facts are stubborn things. What we know for certain is that a key witness in relation to the Boston bombings has been terminated by the state. This witness, who expressed concerns for his life, was likely in possession of information that someone wanted kept secret.

The killing of Todashev has not provoked any protest from within the political establishment. The media has played its usual filthy and subservient role in the cover-up. With the exception of a single editorial in the Washington Postthat expressed concern that Todashev’s death would “fuel wild conspiracy theories,” there have been no calls in the press nor in any federal, state or local institution for an explanation or investigation as to what happened.

After the killing of Anwar Al-Awlaki, a US citizen and Muslim cleric in Yemen in September 2011, questions were raised about the possibility of assassinations taking place within the US. It appears that this has now happened. Yet another line has been crossed in the march towards a police state.

Tom Carter writes for the wsws.org, a socialist information resource.

How Syria Became a More Dangerous Quagmire Than Iraq