Home ANTI-CORPORATISM A Secular Humanist Jew’s Thoughts on Yom Kippur: On Atheism and Theism, and on Religion and Organized Religion

A Secular Humanist Jew’s Thoughts on Yom Kippur: On Atheism and Theism, and on Religion and Organized Religion 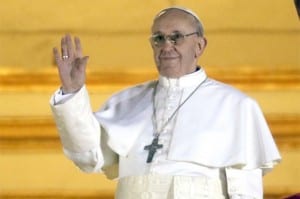 Pope Francis: “Atheists are all right!” In various ways the new pontiff suggests a mind willing to defy convention.

For Secular Humanist Jews Yom Kippur is not a day of atonement, as it is for theist Jews.  We may well have done wrong things in the past year, but we do not regard them as “sins.” “Sin” is a religious concept requiring the existence of an unknown, unknowable, and unprovable, yet somehow all-powerful super-natural being which at some level has control over our lives or parts of them. For us, Yom Kippur, the most important day in the Jewish calendar, is a day of renewal and rededication. We reflect, we restore, we renew — we look ahead, not behind.

Before getting on to what I resolved to renew my efforts in dealing with, let me say that as a humanist, an atheist, for my whole life, I am used to be looked down upon (or worse) by theists. Imagine my surprise, then, when I read of what the new Pope, Francis, had to say about atheists, of which I am surely one, in a lengthy response to a journalist’s questions (http://www.independent.co.uk/news/world/europe/pope-francis-assures-atheists-you-dont-have-to-believe-in-god-to-go-to-heaven-8810062.html): ““You ask me if the God of the Christians forgives those who don’t believe and who don’t seek the faith. I start by saying – and this is the fundamental thing – that God’s mercy has no limits if you go to him with a sincere and contrite heart. The issue for those who do not believe in God is to obey their conscience. Sin, even for those who have no faith, exists when people disobey their conscience [emphasis added].”

Even in a column like this one, I have to say “Wow, that is quite a statement,” especially coming from the Pope. (One can hardly imagine it coming from any of the lay or clerical leaders of the Republican Religious Right in the United States.) It did make me return to consider a line of reasoning about religious persons, as contrasted with organized religion, that I have held for quite some time. The Pope made it clear that he does not have a problem with atheists, per se. And so, I would like to make it clear that I do not have a problem with theists, per se. Yes, I do understand and agree with all of the arguments against the existence of an unknown, unknowable and unprovable “God” or “Gods” (think Hinduism, of which there are about 1 billion adherents). But I do think that it is a waste of time to argue against the concept, and worse to make fun of it, that majority of the world’s population who are theists of one sort or another hold to.

[pullquote] The struggle of humanists and believers alike who are devoted to the fundamental interests of humanity must be focused not on each other but on our common enemy: those who use religion to advance their own political and economic interests to arrogate to themselves and their patrons resources and the product of economic activity that neither benefit humanity as a whole nor have anything to do with religion, those otherwise known variously as “corporatism,” the “global economy [privately held],” and capitalism. [/pullquote]

The problem, for atheists/humanists and, at many times in history theists of one sort confronting theists of another sort as well, is Organized Religion, like the Catholic Church, like the Republican Religious Right (political by definition), like political Islam, like indeed political Orthodox Judaism in modern Israel. Our argument is not, or should not be, with belief and the believers.  The struggle of humanists and believers alike who are devoted to the fundamental interests of humanity must be focused not on each other but on our common enemy: those who use religion to advance their own political and economic interests to arrogate to themselves and their patrons resources and the product of economic activity that neither benefit humanity as a whole nor have anything to do with religion, those otherwise known variously as “corporatism,” the “global economy [privately held],” and capitalism.

Further, it must be understood by all that over the centuries of human civilization, more of our brethren have been killed in religious wars, or wars waged for “religious” reasons, or in wars in which organized religions have been an ally of one or more of the warring states, than for all of the other causes put together. In the Second World War, hardly a religious war in the sense that the crusades or Catholic/Protestant wars of 16th and 17th century Europe were, nevertheless, on the belt buckle of every German Wehrmacht soldier was the slogan (originated by the Prussian Chancellor Otto von Bismarck in the 1880s) “Gott mit Uns.” The traditional Japanese religion of ancestor worship, Shinto, was mobilized by the fascist leadership to help them mobilize the whole population behind the war effort. The Catholic Church was closely allied with both Benito Mussolini’s (Italian) and Francisco Franco’s (Spanish) fascist states. In the United States, it was not like that, but there were the frequent imprecations to God for support in battle and even a popular song that I remember well from my youth during that conflict: “Praise the Lord and Pass the Ammunition.”

Presently, The US Republican Party runs in major part on the issues that are central to the Fundamentalist Christians and Jews who are central to the Republican base: homophobia, religious determinism in policy governing the outcome of pregnancy, the introduction of organized religious activity into the public schools, and in general the steady erosion of the Constitutional boundaries separating church and state. In political Islam, “Islamism” is very clear that its goal is to take full political power so that it may rule under the provisions of “Sharia Law.” (Funnily enough, many of the provisions of Sharia Law, against which the Islamophobes of the Republican Religious Right just love to rail, are strikingly similar to the law that the latter would like to impose across the United States. The central feature of both is that “religious law” [as they interpret it of course] should stand above any civil constitution. Don’t believe me? Just ask Rick Santorum, the Dominionist Mike Huckabee, Antonin Scalia, and etc.) For many Israelis on the Right, the whole policy that has been followed by their Right-wing governments over the years, the gradual erosion and (the hoped for) eventual expulsion (voluntary or involuntary) of the Arab population in the Occupied Territories is based on the Biblical concept of the “Land of Israel.”

Through my writing I have been fighting the forces of the Republican Religious Right for some years. The original of my current book The 15% Solution: How the Republican Religious Right took Control of the U.S., 1981-2022: A Futuristic Novel (http://www.puntopress.com/jonas-the-15-solution-hits-main-distribution/) was published in 1996. And so, what is my renewal for this, the Jewish New Year? To rededicate myself to that struggle, but to feature the line of reasoning that I have outlined above. Our struggle is not with religion, per se, nor with its adherents, as individuals. Our struggle is most correctly with Organized Religion and how it is used to further the interests of Reaction by every government around the world that does use it in one way or another, which in modern times means capitalism and all of its present and future negative outcomes for all of mankind, whether theist or humanist. That is our challenge, and for the preservation of our species and indeed many others, that is the challenge we have to meet. 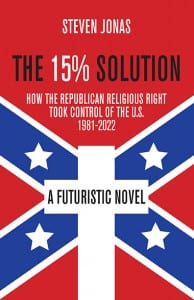 The recently published The 15% Solution explores Christian fundamentalist strategies to gain control of the US government.

Steven Jonas, MD, MPH is a senior editor with The Greanville Post and also a contributing editor to other leading political venues including BuzzFlash@Truthout, and The Political Junkies for Progressive Democracy (http://thepoliticaljunkies.org/). Jonas is also a Professor of Preventive Medicine at Stony Brook University (NY) and author/co-author/editor/co-editor of over 30 books. Dr. Jonas’ latest book is The 15% Solution: How the Republican Religious Right Took Control of the U.S., 1981-2022: A futuristic Novel, Brewster, NY, Trepper & Katz Impact Books, Punto Press Publishing, 2013, http://www.puntopress.com/jonas-the-15-solution-hits-main-distribution/, is available on Amazon.(You can click on the image on left.)

The Problem With the Big Green’s Naomi Klein Gripe

WHY MIDDLE-CLASS LEFT LIBERALS SHOULD DUMP THE DEMOCRATIC PARTY: FINDING...

CIVILIZATION: The story of NYC parks / St. John The...

Criticizing Public Figures, Including Influential Journalists, is Not Harassment or...

The Pine-eyed Boy Escapes from the Belly of the Dark...