Spaniards Say No to Privatized Healthcare 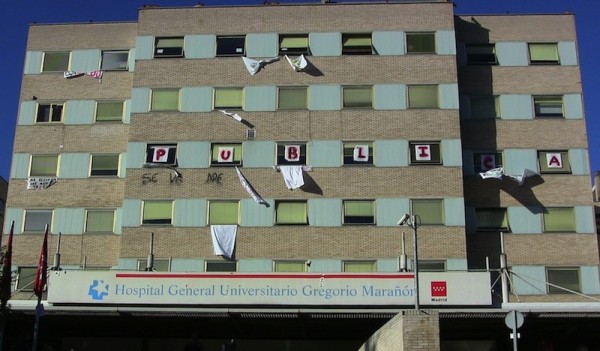 Spanish unions and citizens have won a decisive victory in the battle for public healthcare.

The Spanish healthcare system was ranked seventh best in the world by the World Health Organization in 2000. But last year, Spain appeared to be well on its way to adopting a healthcare system more akin to the one used in the United States, which ranked 37th.
In October 2012, Ignacio González, the leader of Madrid’s regional government, put forward a plan to privatize six hospitals and 10 percent of the city’s health centers. Critics feared the plan was the first step toward privatization of hospitals in other regions.
But after a wave of strikes by medical providers, as well as lawsuits and a popular referendum, Spanish unions and citizens have won a decisive victory in the battle for public healthcare. On January 27, the Popular Party (PP), Spain’s center-right ruling party, canceled the planned privatization of Madrid’s hospitals.
Shortly after the plan was announced in 2012, a coalition of unions called the first general strike in Madrid’s healthcare sector. The “white wave”—a reference to the medical smocks that strikers wore—quickly spread to the rest of the country as healthcare workers in 15 cities supported Madrid by staging a sympathy strike. This was followed by a popular referendum in May 2013, which resulted in more than a million people going on record to oppose privatization.
In September 2013, the High Court of Justice of Madrid (TSJM) put the privatization plan on hold in response to a lawsuit filed by the Association of Medical Specialists in Madrid. The ruling party and the private entities involved in the plan appealed, but the high court upheld its previous decision, arguing that privatization would affect more than a million residents and cause “non-reparable damages” to 5,128 professionals.
Following this decision, and no doubt influenced by months of public unrest, González canceled the privatization scheme and accepted the resignation of Javier Fernández-Lasquetty—the region’s health chief and one of the architects of the plan.
This is “a victory for the social and professional mobilization,” Marciano Sánchez Bayle, secretary of the Federation of Associations in Defense of Public Health, told El País. But he noted that citizens must still “remain vigilant because there are a lot of things that people want to privatize.”

ABOUT THE AUTHOR
Ana Martinez is a Spring 2014 intern.