Home AMERICAN EXCEPTIONALISM THE ART AND SCIENCE OF PROPAGANDA

THE ART AND SCIENCE OF PROPAGANDA 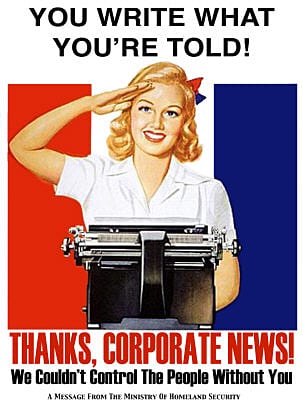 Respect for national sovereignty has been the basis of international law designed to prevent preemptive warfare since the Treaty of Westphalia in 1648 ended the 30 Years War.  The idea was to prevent wars by agreeing that empires and international alliances would not interfere with the internal affairs of any nation. The idea rejected by later Empire builders, leading to two world wars largely brought on by the British Empire’s machinations. This policy of ignoring international law has been followed by the US ever since and now poses a risk to peace and national sovereignty everywhere.
•••
Americans are taught that Hitler’s attempt at creating a fascist New World Order was the result only of his insane ambition. We are not told that since the Allies defeated Germany, the US has been working to create its own Empire, one that is fast coming to resemble Hitler’s.  Despite the obvious signs of a police state being created in the US with the passage of the Patriot Act, NDAA and the NSA program of unlimited domestic surveillance, most Americans refuse to see it.
•
The bellicose nationalism that so many decried when Bush was in office continues largely unopposed and the Bush Doctrine of preemptive war has been replaced by the use of terrorists to fight proxy wars in the name of “responsibility to protect [R2P],” a doctrine that exists nowhere in international law.
•
There is a good reason for that. It is a direct violation of the UN charter and of the Kellogg-Briand treaty that made war illegal except in self-defense.
•
If we are ever going to see the end of war, it is imperative to understand the systematic way in which generations of Americans have been indoctrinated to accept the idea that it is inevitable.  The explanation is not that complicated. The problem is that few people are working to educate Americans about their real history since WWII, and this allows their leaders to repeat the same mistakes that lead to the downfall of all empires.
•
As detailed in The Irregulars, the British Intelligence Service was very active in the United States prior to and after its entry into WWII. Given the prevalence of American isolationist sentiment prior to the attack on Pearl Harbor, its main mission was to promote pro-war propaganda and to discredit anti-interventionists. It worked tacitly with the Roosevelt government and later with the OSS to carry out this mission. The head of BIS in America successfully lobbied to have Wild Bill Donovan to head the new US spy service. Given the long British experience with subversion and espionage, the OSS was quite dependent on the BIS, forging personal bonds between the principals that served industrialists in the US and the UK well after the war…
•
The CIA was established by the National Security Act of 1947, that completely restructured the US military and intelligence agencies to reflect a new imperialist agenda. The war profiteers had assumed so much influence over the US government and the media by that time that they saw a huge potential to profit from building a sprawling military-industrial-government complex under the guise of fighting communism. In addition to creating the first peacetime intelligence service in the history of the US, it established the position of Secretary of “Defense,” the Joint Chiefs of Staff and the “National Security” Council. In the aftermath of the war, a consensus was forged that “American interests” were synonymous with those of the corporate powers, which have essentially dictated foreign policy ever since. This assumption is best summarized in a statement by Cold war architect George Kennan of the State Department in 1948:
•

“…we have about 50 percent of the world’s wealth, but only 6.3 percent of its population…In this situation, we cannot fail to be the object of envy and resentment. Our real task…is to devise a pattern of relationships which will permit us to maintain this position of disparity without positive detriment to our national security…We need not deceive ourselves that we can afford today the luxury of altruism and world-benefaction…We should cease to talk about vague and — for the Far East — unreal objectives such as human rights, the raising of the living standards, and democratization. The day is not far off when we are going to have to deal in straight power concepts. The less we are then hampered by idealistic slogans, the better.”

That year, a turning point in US and world history had occurred. On Kennan’s advice, Truman signed a National Security Directive authorizing the CIA to conduct covert operations in such manner that the US government could plausibly deny them if uncovered. The decision to extend the actions of the CIA beyond intelligence gathering for the president would prove to have fateful consequences. From NSC Directive 10/2:

“…such operations shall include any covert activities related to: propaganda, economic warfare ; preventive direct action, including sabotage, anti-sabotage, demolition and evacuation measures ; subversion against hostile states, including assistance to underground resistance movements, guerrillas and refugee liberation groups, and support of indigenous anti-communist elements in threatened countries of the free world. Such operations shall not include armed conflict by recognized military forces, espionage, counter-espionage, and cover and deception for military operations.”

The importance of propaganda in waging the Cold War cannot be understated, because without it American military intervention would never have been tolerated by a public that since WWI had largely heeded Washington’s advice to “avoid foreign entanglements.” The CIA role in creating propaganda not only overseas but in the US was well established by the early 1950’s when CIA Director of Office of Special Operations (the covert branch of the CIA) established Operation Mockingbird. Building on relationships established by the BIS and OSS with friendly journalists and publishers, the CIA created an elaborate network of news sources that disseminated propaganda that served to indoctrinate Americans about communist threats everywhere. This provided the rationale for creating a military –industrial complex so vast that Eisenhower was compelled to warn Americans about it as one of his last acts as President. (See below)

The list of ways this control of the corporate media has influenced American history is too extensive to list here. It has led to coverups of criminal CIA activities overseas and at home, the creation of a fear-based foreign policy and a bias toward war that has completely transformed American attitudes toward war and other foreign interventions, most of which remain unknown to them. Only now have the war profiteers become so obvious in their plans for corporate world domination that Americans are beginning to appreciate the true costs of war.  In stridently opposing US strikes on Iran and Syria, the traditional American reluctance to go to war for corporate Empire is beginning to reassert itself.

It is possible to end war. That day will only come when enough people reject the self-fulfilling prophecy that it is inevitable.

ABOUT THE AUTHOR
Rick Staggenborg, MD, is a dedicated peace, democracy and social justice activist. He’s the founding editor and principal participant of several blogs, including Soldiers for Peace International.

The Campaign to “Cancel” Colbert

WHITEWASHING THE UGLY FACE OF CAPITALISM: The media’s false (propaganda) equations and assertions