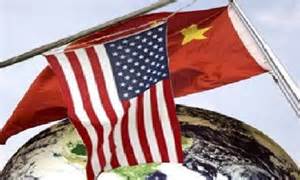 Photo credit: U.S., China and the world by worldnewscurator.com

A tale of two countries: some years ago China and the U.S. were traveling down the same road, with America in the lead, when they came to a fork in the road. The U.S., saw the sign marked “military dominance”, and rushed down the left branch. China, after studying both options, traveled down the right branch marked “Economic supremacy.”

This tale accurately describes how China and America are rapidly heading in totally opposite directions, with two different objectives and two distinctly different strategies. China is using its resources to become the world’s #1 economic power while those of the U.S. remain largely concentrated on remaining the world’s military superpower.

What we have here is a growing confrontation between these two world powers and their opposite philosophies in critically important regions of the world, specifically, Eurasia and Central and South Asia. Now while this would appear to be a struggle for supremacy between China and the U.S. recent events are making it very clear that far more is involved.

There is another player in this geopolitical chess game. Russia has now joined with China, thus forming a very powerful alliance to resist the U.S.’s intentions in this resource rich region of the world. Either one of these countries would present the U.S. with a formidable challenge to achieving its objectives but, together, they could be considered an immovable obstacle.

If we think more deeply about what is going on and how this situation has reached this tenuous point, the reasons become quite clear. For some time now the U.S. has been attempting, with its NATO partners, to encircle Russia with its military power. And more recently it has also decided to follow that same strategy relative to China when President Obama initiated his Asian Pivot to begin the process of encircling China with military power. Good luck with that.

Just recently, reacting to the mounting influence of the U.S. in Ukraine affairs, Russia’s President Putin, without causing any military confrontation, greatly strengthened his country’s alliance with Crimea and, thereby, assured Russia’s continuing control over its strategic naval base at Sebastopol, as well as its access to the Black Sea and beyond. While this clever chess move was being made the U.S. and NATO could only stand by and watch.

So while the U.S. pursues its objective of encircling China and Russia with military power those two adversaries are reacting to these moves with their own counter-strategy, that is, encircling the U.S. interests across Eurasia and Central Asia with their growing economic power. They have no intention of challenging America with military power because they are not about to ignite a world war but they are doing it with the force of their economic power that they strongly believe is a far better strategy.

What we have here could be accurately described as: America, the irresistible force confronts China and Russia, two immovable objects. Now let’s take a look at how these two distinctly opposite geopolitical strategies are working and the probability of success for each.

Everything the U.S. does in these increasingly important regions of the world revolves around military power; from Afghanistan to Pakistan in the southern Asian region, to the alliance with NATO countries to the West and those in between. China, on the other hand, is concentrating on positive and constructive development projects in various countries, making friends, not enemies.

China is following a concrete plan to build, construct, and expand its economic presence all over the world and especially in these regions; some might refer to what they doing as building an economic empire. As a recent article in the Asian Times article states, “It’s building not one, but myriad Silk Roads, far-reaching webs of hi-speed railways, highways, pipelines, ports, and fiber-optic networks across huge parts of Eurasia. These include a Southeast Asian road, a Central Asian road, an Indian Ocean ‘maritime highway’ and even a high-speed rail line through Iran and Turkey reaching all the way to Germany.”

For those who are not familiar with the term Silk Road here’s a definition from thefreedictionary.com: “An ancient trade route between China and the Mediterranean Sea extending some 6,440 km (4,000 mi) and linking China with the Roman Empire. Marco Polo followed the route on his journey to Cathay.”

What China is doing, its relentless march to world economic supremacy, is reminiscent of a quote from an old horror movie when the really scary main character makes this statement, “Step by step, inch by inch.” That’s China, low key but relentless in advancing its economic agenda. Meanwhile the U.S. government goes around the world acting like a bull in a china shop, from one military confrontation to another, seemingly obsessed with spreading its military presence.

Here’s an article that indicates that China is now in the process of implementing its 12th Five Year Plan. Talk about planning ahead, China seems to be following a technique that has been commonly used in the corporate world called Management by Objectives, which is self-explanatory. Does America have a Five Year Plan? Well, based on this government’s reactive rather than proactive way of doing things, I would venture to say that such planning is non-existent.

Trying to encircle China and Russia with military power is most certainly a totally misguided plan and strategy which might be called biting off far more than you can chew. Or it might be like trying to wrestle a crocodile and an alligator at the same time. When in American history have we seen a foreign policy that is, by its very actions, not only helping to creating a close alliance between two adversaries but seems to be greatly strengthening it at every turn?

Russia and China are using their economic powers and growing mutual cooperation to convince numerous countries to side with them, enticing them with Russia’s massive energy resources and China’s developmental prowess; making these countries dependent upon them and, thereby, cementing relationships; and with every one of these steps they take they are diluting America’s influence in the region.

As the U.S. increases its efforts to try to intimidate China and Russia the alliance between them becomes stronger and stronger. Here’s a linkto an article which reports on a monumental agreement by which Russia will be supplying China with natural gas worth $400 billion over 30 years. This is but one of many such trade agreements to follow between China, Russia and the other members of the BRICS group which also includes India, Brazil and South Africa, all of which are intended to be conducted with currencies other than the U.S. dollar.

China is, unquestionably, on the rise; it has a clear vision for the future and it wisely uses its resources to strengthen its interests all over the world. America is caught up in a state of stagnation with a dying manufacturing sector, and a hollow, lifeless economy. The U.S. government no longer has a vision for the future; it cannot see the handwriting on the wall that says, “Stop”, you’re going the wrong way, reverse direction before it’s too late.

So what is the lesson to be learned in this confrontation between great powers? It’s simply this. In the short term military hubris may dominate but, in the longer term, economic supremacy will prevail.

Michael Payne is an independent progressive activist. His writings deal with social, economic, political and foreign policy issues; and especially with the great dangers involved with the proliferation of perpetual war, the associated defense industry, and the massive control that Corporate America holds over this government and our election process; all which are leading this nation down the road to eventual financial ruin if the conditions are not reversed. He is a graduate of Northwestern University, Evanston, Illinois and a U.S. Army veteran.