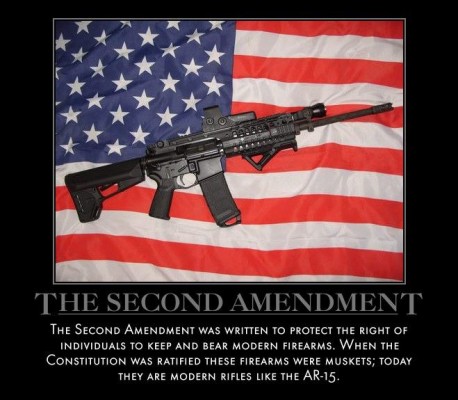 Guns are for killing.
Killing animals and killing people.
True, some folks, maybe most, who own guns just use them for target shooting.
I do.
I shoot skeet.
Did so competitively for almost 30 years.
And I own shotguns. Used to collect them.

But a lot of the gun culture in America is based on misinformation and delusion.
The NRA and its mouthpieces claim guns prevent crime.
That is ridiculous. Guns are used in crime, and few criminals are ever subdued by law abiding gun owners.

The Right Wing nuts who advocate Somalia-like access to guns by everyone are convinced that Obama and the US Army are going to show up on their front door steps to confiscate their guns.
Unfortunately, no plans to disarm the lunatic Right are currently in the works.

The Founding Fathers inserted the Second Amendment into the Bill of Rights to assure the ability of the people to resist government tyranny. They were all too familiar with the British monarchy’s oppression of the colonies, and wanted to guard against any future oppression. At the time, muskets were all the governments had to use against the people, and the people having muskets also seemed like a good idea at the time.

To apply that Eighteenth Century standard today, the people would have to have access to nuclear weapons, bombers, and missiles.

Clearly, no one advocates for such weapons in the hands of private citizens. Well, maybe a few lunatic Republicans might, but no one seriously entertains the idea.

So the Second Amendment has outlived its purpose.

What possible reasons exist for the Second Amendment today?

The Second Amendment is nothing more than a myth.
A fund-raising tool for the Right.
An excuse for gun manufacturers to profit from the killing of people and animals.
A talking point for Conservatives.
And a safe harbor for criminals, psychopaths, and the delusional rednecks who pretend they are soldiers on the weekends.

ABOUT THE AUTHOR
A onetime campaign strategist, Roland Vincent is a dedicated activist for peace, democracy, animal defense and social justice, but don’t make the mistake of calling him a pussy.

The Rise of ISIS

The Great Challenge-Oil + The Secret of the Seven Sisters