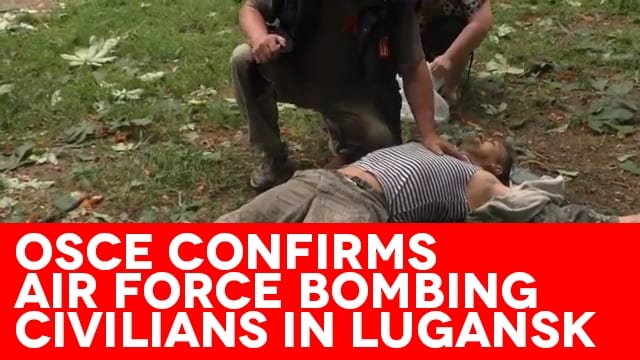 Editor’s Note: Let us recall that while Ukrainians are hardly innocent to the hardships and horrors of war they are not these days nor have they been for a while in any kind of murderous tumult like that visited daily on the people of Iraq or the Palestinians. Thus this level of military activity is something of a shock for a population until recently living in relative peace under one national government. —PG

[A]s we at “Asia Kappa Productions” were shuttling footage between Kenya and Indonesia, finishing our editing of the interview that I conducted earlier this year in Kharkov with my friend Sergei Kilchuk, leader of Ukrainian left-wing movement ‘Borodba’, a new email popped-up on my screen. It was in Russian language and it appeared extremely urgent:

“Respected Andre, I am from Kharkov. You gave me your name card, in front of the Lenin Courthouse, during the trial with Mr. Topaz (anti-coup dissident). Here is the link to video, showing how the Ukrainian armed forces are bombing peaceful inhabitants – please show this to the world; let the world see what ‘terrorists’ the Ukrainian authorities are targeting”: 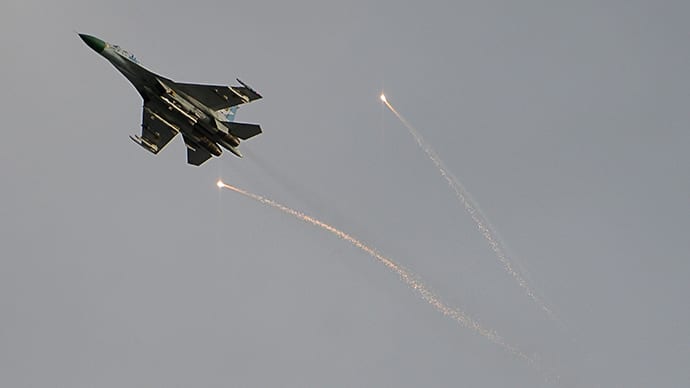 A Ukrainian fighter flies above Lugansk during a battle between resistance fighters and the Ukrainian National Guard in June 2, 2014 (RIA Novosti / Evgeny Biyatov)

I hit the link. On the choppy video, frustrated people are talking one over the other.

Roads are dotted with craters.

“July 2nd, 2014”, declares a voice in Russian, with Ukrainian accent. “Luhanska Village… The plane flew over the city of Luhansk and then hit the village Luhanska. What was it aiming at is not clear… Here is a crater, here are private parking lots…”

The smoke is rising towards the sky. Houses are damaged, some totally destroyed.

Confused dialogue continues: “What were they aiming at? A train station?”

Camera moves further, towards destroyed cars and more destroyed houses. Those who are filming appear to be shocked, constantly exclaiming, in disbelief: “Fuck your mother!” a Russian phrase expressing bewilderment and distress.

As the cameraperson moves further down the road, it becomes clear that some houses are leveled with the ground. Fires are still burning. It is 11:37AM, tells the voice, but we never learn at what time exactly came the attack, although one of the voices says that what we see is taking place approximately half an hour after the bombing.

“Go film there!” Screams an outraged man. “Go, damn it! Show what the fascists did! People are torn to pieces.” There is a third corpse nearby, covered by blanket.

“Damn Nazi, that whore Poroshenko!” someone refers to the pro-Western President of Ukraine, and a head of confectionary empire.

Camera then shows one old beaten fire truck. It cannot clearly cope with the tragedy of this scope.

“How many people died?”

“Ten”, someone answered, “But there are more people dead inside the houses”. [The actual tally was put today at 181 by Russian news sources, and is said to be incomplete.—Eds]

Cameraperson is abruptly intercepted and confronted by locals:

“Journalist from Russia. TNT from Saratov…”

“From Russia? So why the hell is Putin silent?”

“I feel shame,” mumbles the reporter… And then he keeps repeating: “So many people died… so many people.”

The footage ends when a man approaches journalists and screams: “Come, I will take you… where my mother is… her corpse… I will show you everything…”

Next day, the BBC reports, phlegmatically: “The new Ukrainian defence minister vows to hold “a victory parade” in Crimea as fighting continues against pro-Russian rebels in the east.”

Somewhere at the very bottom of report appear few lines:

“Rebels in Luhansk accused government forces of killing civilians in the village of Luhanska on Wednesday. District mayor Volodymyr Bilous told Ukrainian news agency UNN that warplanes had bombed the area, killing nine and injuring 11. Another report spoke of 12 deaths…”

Kremlin is uncharacteristically quiet, while Kiev is in overdrive, increasingly aggressive and bold, with both the US and EU right behind its soiled back.

Andre Vltchek is a novelist, filmmaker and investigative journalist. He covered wars and conflicts in dozens of countries. The result is his latest book: “Fighting Against Western Imperialism”.  ‘Pluto’ published his discussion with Noam Chomsky: On Western Terrorism. His critically acclaimed political novel Point of No Return is re-edited and available. Oceania is his book on Western imperialism in the South Pacific. His provocative book about post-Suharto Indonesia and the market-fundamentalist model is called “Indonesia – The Archipelago of Fear”. His feature documentary, “Rwanda Gambit” is about Rwandan history and the plunder of DR Congo. After living for many years in Latin America and Oceania, Vltchek presently resides and works in East Asia and Africa. He can be reached through his website or his Twitter.

Why Elections Still Matter, Except When They Don’t

At Some Point, Progressives Need to Break Up With the Democratic Party

Like an unrelenting cancer, the sociopathic US empire refuses to...