Home AFRICA Immigration in the Time of Imperialism

Immigration in the Time of Imperialism 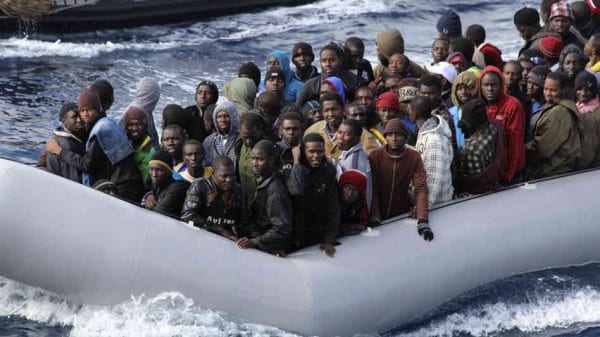 Poor Africans are setting sail for Africa in ever increasing numbers. The continent’s constant turmoil and endemic poverty caused by neocolonialism and its native collaborators has made life impossible for the majority. This group was rescued by the Italian navy.

[T]he lids between deck and dark airless hold are bolted shut. The 45 lifeless bodies are neatly stacked in the hold one atop the other. Silence reigns down in the torrid darkness. The lifeless bodies are all young males. From Central Africa. No signs of mass panic among them. No blood anywhere.

The old 30-meter ex-fishing boat could conceivably accommodate 300 desperate youth. Six hundred chiefly black people are packed aboard, most on the open deck, for the less than 200-hundred mile voyage from Libya to hell. Preferably to the Italian island of Lampedusa. Every centimetre on deck is occupied with life.

Survival is on everyone’s mind.

What is happening below in the hold hardly counts.

The gasping, asphyxiating Africans, gradually suffocating in the darkness, hardly remember their departure. Departure? From home? From the strange country on the shores of a huge body of water? Where did it all begin? Who am I, each is asking? Who are they? What am I doing here? Silently, each wonders to himself about his short life. Was this life? Was this what Europe meant? Life? Was this what his parents and relatives had pooled their savings for? For him to go to sleep rocking in the airless darkness? Or do the others perhaps whisper questions and doubts and fears one into the mouth of the other, to the one in the row on top of him, or in the next row under him. Though smells have not changed, not yet, the men in the rows on top must sense as he does that there are dead below them. How deep does life reach below them? That might be is his last thought, too. How deep in the dark hold does life reach? His consciousness too now begins vanishing.

None of the 45 are aware of the arrival in Italy of the barely floating piece of junk. Is this Italy, people on deck ask each other? Warships, flashing lights, loudspeakers blasting instructions in mysterious languages, men dressed in green and white disguised behind menacing white masks, handing out plastic raincoats and plastic bottles of water, women here, men there, newborn babies passed from hand to hand over their heads, urging the 600 minus 45 through the welcome gauntlet.

But the 45 ask nothing. They lie silently in their orderly rows while teams of specialists force open the tiny entrances to the hold-mortuary. Flashlights sweep the dark hold. Horror is there. Unbelievable the sight from the deck into the silence of the dark hold. There was no escape for 45 strong young men from Africa.

Not even a photograph is available of the horror in that dark, airless hold.

What is the reader of tragedies of this proportion to feel? Chagrin, guilt, personal remorse, shame, or again simply the horror to be forgotten tomorrow? 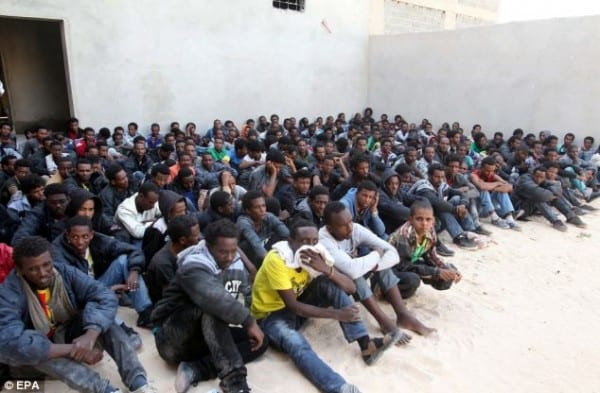 The Libyan government today said it was struggling to cope with the number of sub-Saharan Africans arriving in the country (as a result of failed attempts to get to Europe), and threatened to help them enter into Europe themselves if EU countries do not ‘assume their responsibilities’ and offer the country more aid. The announcement comes as hundreds of migrants are feared dead after a boat carrying a reported 400 people sank off the coast off the coast of southern Italy. The accident happened around 100 miles south of the Italian island of Lampedusa where more than 300 Eritreans perished last autumn, according to reports in the Italian media. The boat was around 50 miles north of Libya.  (Source: Mail online -UK)

While Americans marked the national holiday weekend of July 4, 5000 migrants on no less shaky vessels were picked up on the Mediterranean by Italian patrol boats. On July 2 alone, 70 unknown and unidentified, probably sub-Saharan, persons departing from North Africa were lost to the sea’s waters in another accident. Most people have already forgotten the 360 people who perished in the waters of Mare Nostrum near the Italian island of Lampedusa, half way from Libya—the chief jumping off point—to continental Italy. The hell left behind by US/NATO forces after they brought “democracy” to the Libya that was once one of Africa’s most  progressive countries, has no means nor desire to hold African immigrants waiting for the crossing to magical Europe.

Since Italy abrogated last year an immigration law that theoretically refused entry to immigrants from Africa, in the first six months of 2014 alone, 65,000 migrants have arrived in Italy. Most passed through reception centers on the island of Lampedusa. In 2013, when the strict immigration law was in effect, 8,000 were recorded in the early months of year. Italy claims that for geographical reasons it bears the brunt of the predicted waves immigrants from Africa’s poorest and most war-torn countries and demands help from the European Union. The EU countries of northern Europe led by Germany respond that they receive many more immigrants for integration than does Italy. It is true that most immigrants from Africa and the Middle East aim for North Europe, especially Germany where sufficient employment is available. Italy with nearly 13% unemployment and 40% of its youth between 15-26 years unemployed, has little to offer.

To EU bureaucracy the immigration problem seems insoluble. Yet Europe has had two decades to prepare for what is now an emergency: last century journalists, novelists, academic specialists warned over and again that if oil was the issue of the 20th century, the twin problems of water and immigration were to be the great world problems of the 21st century.

Chinese or American walls are useless to stop the flow. The dangerous Mediterranean lies in wait. A complete naval blockade is unthinkable, impossible. And despite all laws and blocks, despite Mare Nostrum, Africa is arriving. Africa is here.

Moreover, with each of America’s wars in its Middle Eastern-East European expansion strategy the waves of immigration swell: Libyans, Tunisians, Egyptians, Syrians, East Europeans aim at (once) rich Europe.

The bill for centuries of colonialism and exploitation and now current US imperialism has fallen due. Africans and Middle Easterners are here to collect that bill.

Sooner or later, there is always a payback.

Gaither Stewart’s latest book is a primer on socialism, Recollection of Things Learned, Remembering Socialism (Punto Press,2014). He lives in Rome with his wife Milena.

The American Political Mind is in a Sad State

The Israel Lobby and French Politics

Why is Ukraine the West’s Fault? Featuring John...