MH17: Killing Innocent Civilians in Order to Save Fascism for Ukraine and NATO Expansionism 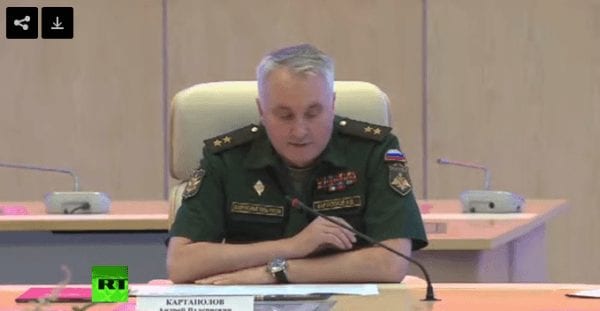 [A] fuller version of what happened starts emerging piece by piece. First, as I pointed out earlier, in one his daily battle reports, Strelkov or his associates indicated as if in passing that the Malaysian airliner, Boeing 777, was shot down by Ukrainian jet fighters. Then came the briefing by the Russian Ministry of Defense, which showed a Ukrainian SU-25 within 3-5 km from the Boeing at the very moment when the Boeing was hit.

In the next four minutes, the Ukrainian fighter remained in the area. At the moment, when the Boeing was hit, it was also within the range of several Ukrainian Buk batteries, which were deployed close to Donetsk and then, just for that very day, 8km south of Shakhterskoye, which is also only several miles from the crash site.

On July 23, Anna-News published an interview with a Russian Air Force retired colonel Aleksand Zhilin (Александр Жилин) who is a frequent military commentator on the conflict in Ukraine. The most important information is stated at 2:00-5:00 in the interview.

According to the colonel, at 16:19:45, a Ukrainian jet fighter targeted the Boeing with an air-to-air missile R-60. The missile damaged the right engine of the Boeing. The Boeing was hit, but still managed to stay in the air. However, in doing so, the Boeing turned 180 degrees to the left. It was at this moment that the false flag attack started falling apart. According to Zhilin, part of the plan controlled by the US with Ukrainian hands executing it was to have the Boeing crash past the southern frontline by the Ukrainian-Russian border. Had the Boeing fallen there, securing the crash sites with the troops in response to international pressure was on top of all else effectively allow Kiev to lift the encirclement of its brigades in the southern pocket by the Russian border.

When, however, the Boeing started to turn in the opposite direction and was still apparently manageable, “the US-Ukrainian headquarters of the special operation panicked and order the Buk battery to destroy the plane in the air in order to preempt the possibility of the Boeing’s emergency landing.” A Buk missile was fired and the plane was then finally destroyed.

The disclosure of the Russian electronic intelligence (in fact, only one part of it) on July 21 put the US against the wall. The existence of this intelligence and other data also means that the US cannot show the real intelligence, which they also have, including the data from their electronic warfare exercise SEA BREEZE 2014 and the data from their spy satellite, which just happened to be over the area during the downing of the Malaysian Boeing.


Aleksandr Zhilin, a Russian Air Force Colonel from Moscow, also offered a short write-up with a map of the very last moment of the MH17 flight with the indication of a sharp 180 degree U-turn following the loss of its right engine after being hit by a R-60 air-to-air missile from a Ukrainian fighter jet.

If Zhilin’s flight map is correct, then the MH17 plane was hit basically right over the frontline when already passing Snezhnoye, and that means sooner than what other so far published information asserted. The timing and location of the attempted downing also accords with the theory that the crash site was to be either on the territory controlled by the Ukrainian army or much closer the border between Russia and Ukraine where the “securing of the site” would allow lifting the strategic encirclement of the Ukrainian troops in the south and thus, on top of other objectives, saving the Kiev junta from its first major military defeat.

Zhilin’s analysis based in part on investigation of Nikolai Istomin reveals one singularly shattering fact,  which Kiev, the US, NATO, and corporate media kept under the wraps. A more detailed and careful analysis of the flight path of MH17 does, indeed, confirm that LH17 reached Snezhnoye at 16:19 local time still whole, complete, and in good health, so to speak. But the crash site is in Grabovo, which is almost 20 km (25km by road) NORTH of Snezhnoye. That, indeed, means that the plane 1) flew then backwards and that 2) its crash site ended up well behind the furthest southern point, which the plane reached.

This completely disapproves the US (US State Department) creative “drawing” of the supposed NAF BUK missile hitting the plane head on from Snezhnoye. This U-turn then also helps explain why Kiev’s first fake “leaked conversation of the rebels” tried to place the “rebels’s Buk battery” in Debaltzevo, which is just straight ahead from Grabovo–further north. However, that would not explain the U-turn, which they tried so much to conceal, for it points to the Ukrainian jet fighter.

The second “leaked” tape tried to place the “rebels’ Buk battery” to Donetsk, for the first attempt was too much at odds with the timing of the (first) impact. The missile would have to pass the plane, then turned around and hit it from behind … The quickly produced “Donetsk” fake tacit correction was supposed to address these inconsistencies, which were expected to arise. But the crash site in Grabovo, north of the acknowledged fight path and hence also further from the range of a battery put into Donetsk did not resolve well all the remaining discrepancies, not to mention the fact cunningly or just sloppily overlooked by the White House and the Western media, that already these two tapes were not only mutually exclusive, but also mutually refuting each other.

So, just several hours after the second tape, Kiev came up with a video, most likely showing the very Ukrainian Buk battery, which was actually shooting 8 km south of Shakhtyorsk against the Boeing. Kiev, however, claimed that it was the rebels’ Buk battery. Alas, the billboard on the left side of the short video shot from behind a bush, made it clear that the video was made in early morning hours on July 18 in Krasnoarmeysk controlled by the junta since May 11.

This video and further fake US “intelligence” thus started to assert that the rebels shot at the plane from Snezhnoye. This, however, required either to lie about the location of Grabovo, which, indeed, some Western media then put south of Snezhnoye, or to move the point when the (first) missile struck back northward. This still, however, could not explain why the crash site was east of the route, and it also presupposed that the plane would have been hit the Buk missile head-on.

To keep this story flying required revealing as little facts and topographic data (or a map of the crash site) as possible, which, for, the Western media, has never been a problem.

As a result, the one crucial fact revealed by Zhilin is the crucial fact that the rear of the plane and the main crash site is in Grabovo, some 20km east and north of Snezhnoye, which the plane actually passed, and, on top of it, that the pilots’ cabin is even more north (and more to the west) than the rest of the plane. The pilots’ cabin crashed in the village of Rozsypne/Rassypnoye, which is few kilometers north and west of the main crash site of the plane, as can be glanced from the maps of Zhilin and Istomin and this map of the area (the village of Rozsypne/Rassypnoye is well marked):

This location of the pilots’ cabin and the main body of the plane cl
early shows in which direction and from which direction the plane was falling to the ground–the very opposite to what we were led to believe.

On the heels of announcements that Ukraine refuses to give to the international investigators of the MH17 crash records of the conversations and directions passed between Ukrainian air traffic controllers and the Malaysian Boeing are coming reports that these records got lost, and that the key key dispatcher from Dnepropetrovsk who was communicating with the plane has disappeared.

Other reports alleged that a group of US experts is busy reviewing the records in order to decide what can and cannot be released and in which form, if at all. Perhaps the decision has already been made.

The air traffic control, which guided the plane in its last moment over the Donetsk People’s Republic, operates from Dnepropetrovsk, which is also the bastion and main seat of oligarch Ihor Kolomeysky’s power and his expanding Nazi fiefdom.

US Intelligence: Russia Didn’t Do It