Russia Has Western Enemies, Not Partners 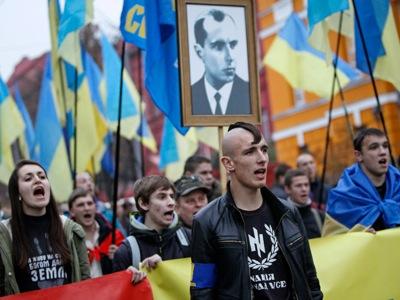 Kiev’s neonazis operate not only with impunity, but at the highest levels of government, with Washington’s and EU’s tacit consent.

[dropcap]T[/dropcap]he US House of Representatives has joined Hillary Clinton, Obama, the neoconservatives, Washington’s vassals, and the American and European presstitutes in demonizing Russia and President Putin. The House resolution against Russia is a packet of lies, but that did not stop the resolution from passing by a vote of 411 for and 10 against.

The entire world should take note that the American people are capable of electing only ten intelligent representatives. Ten people out of 435 is 2 percent. And yet Washington declares itself to be the “exceptional,” “indispensable” country empowered to exercise hegemony over the world!

No one should be surprised to see Washington, its presstitutes and European vassal states using the same propagandistic lies against Russia and Putin as were used against Iraq and Saddam Hussein, Libya and Gaddafi, Syria and Assad, Afghanistan and the Taliban, and Iran. Washington is fearful of the rise of Russia and China, of the leadership demonstrated by Vladimir Putin, of the formation of new organizations independent of Washington, such as the BRICS. While the George W. Bush regime was sidetracked by its “six week, $70 billion war,” which turned out to be, so far, a multi-trillion dollar 13-year losing operation, Putin kicked out some of the American agents who were contaminating Russian sovereignty and rebuilt the country.

When Putin blocked the planned US invasions of Syria and Iran, Washington decided that something had to be done about Putin and Russia. Washington had spent $5 billion dollars buying Ukrainian politicians and funding fifth column NGOs. With Putin distracted with the Olympics, Washington struck, overthrew the elected Ukrainian government and installed its puppets.

The puppets set about antagonizing Ukraine’s Russian population in provinces that formerly were part of Russia but were attached to Ukraine by Soviet leaders when Russia and Ukraine were the same country. Russians threatened with death and the banning of their language naturally did not want to be victims of Washington’s puppet government in Kiev. Crimea voted to reunite with Russia from whence it came, and so did the eastern and southern provinces.

Washington and its the vassals and presstitutes lied and described these acts of self-determination as Russian invasion and annexation. Russia is falsely accused of having troops occupying the breakaway provinces. 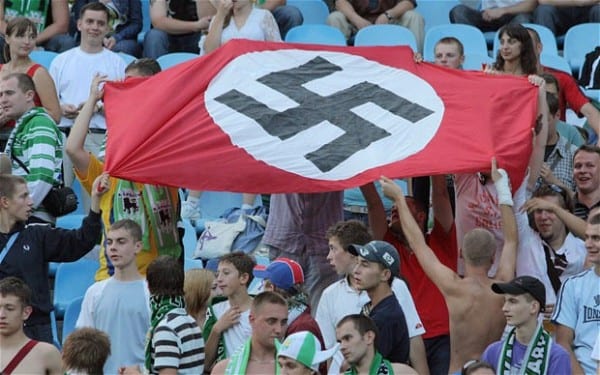 The purpose of Washington’s false accusations is to destabilize Russia and the country’s government. Washington has many avenues by which to destabilize Russia. Washington has the US funded NGOs, the foreign owned Russian media, and the House Resolution calls for Washington to expand propaganda broadcasting into Russia in the Russian language. Washington has cultivated oligarchs, business interests and Russian politicians who see their economic and political interests aligned with the West. There are deluded Russian youths who think freedom resides in the West and others represented by such as Pussy Riot who prefer the West’s amoralism or immoralism to the Christian culture that the Russian government supports.

If Washington fails to destabilize Russia or to have Putin assassinated, frustration could result in more reckless behavior that could lead to military conflict. The House Resolution calls on Obama to arm Ukraine with US weapons so that Ukraine can conquer the separatist provinces and take back Crimea. There are constant calls from NATO itself for more military forces on Russia’s borders, and NATO war games are conducted near Russia’s borders. Washington wants to include the former Russian provinces of Georgia and Ukraine in NATO, something that Russia cannot accept.

Washington is placing the world on the path to Armageddon, as Professor Michel Chossudovsky makes clear in “Towards A World War III Scenario” (Global Research, 2012). 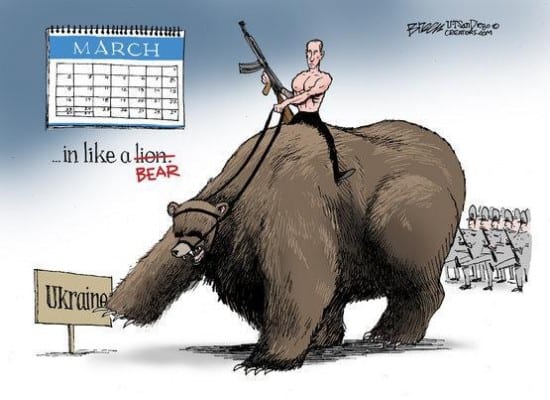 The idea that Putin and Russia are out to conquer Europe and the world is relentlessly promoted by Western propaganda, with plenty of support from the top politicians.

Washington has made it completely clear that Russia can be part of the West only as a vassal state and not as a sovereign country with its own interests and an independent policy. Washington’s demand for hegemony does not permit the existence of other sovereign countries sufficiently strong to resist Washington’s will. As the ideology of hegemony has a powerful hold on Washington and is institutionalized in the neoconservative control of critical government offices and media, war is the almost certain outcome.

Washington’s puppet rulers of Europe are the enablers of the neoconservative war-mongers. In all of Europe there is not a government independent of Washington. Pawns like Merkel, Cameron, and Hollande are selling out human life.

Russian government officials, such as Putin and Lavrov, address the facts, but to Washington and its European vassals facts are not important. What is important is to destabilize Russia. The conflict that Washington has brought to Russia cannot be addressed on a factual basis.

While the Russian government was preoccupied with the olympics, Washington struck in Ukraine, installing a puppet government. It is likely the case that the only solution that can make the festering problem of Ukraine go away is the reincorporation of Ukraine in Russia.

Political life is full of ambitious persons and agendas. Putin faces these ambitions in Russia. Washington knows that Russia cannot be turned into a vassal state as long as Putin is in office. Therefore, the demonization of Putin and plots against him will continue.