Home ABOMINATIONS The Consequences of Seven Decades of American Capitalism

The Consequences of Seven Decades of American Capitalism 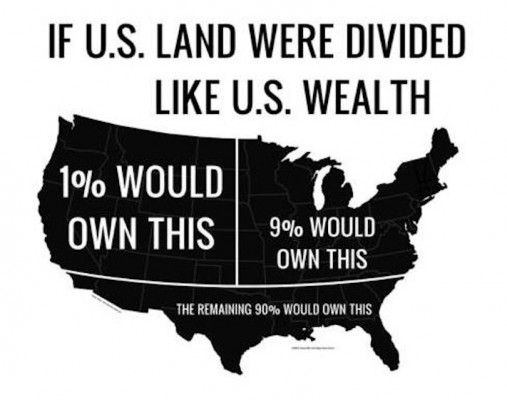 This map is now somewhat outdated.  The current situation is significantly worse.

From 1948 to 1973, hourly compensation grew instep with the productivity of the typical American worker. This means that, for about a generation’s time, there was a relatively equal distribution of economic prosperity amongst workers in the United States. In the ensuing thirty years, however, inequality exploded. In her article entitled “The Capitalist Machine: Computerization, Workers’ Power, And The Decline In Labor’s Share Within U.S. Industries”, sociologist Tali Kristal evinces the dismal disconnect between productivity and pay spanning 1973 to 2011. Despite the fact that general productivity grew some 80 percent in those four decades alone, Kristal argues that reparations to workers did not follow suit. For that matter, workers generally saw compensation limp along, rising little more than 10 percent.

The drastic change in wealth distribution may not flummox Americans quite like it used to. The World Socialist Web Site recently published an article that addressed the US war on basic democratic rights. One byproduct of America’s grossly inegalitarian distribution of wealth happens to be the spark in social unrest and dissidence among students and workers. The plutocracy continues to deploy militarized police and other state-sponsored means of political repression in order to quell public demonstrations of disapproval. Why? Mass unemployment and wage stagnation have plagued workers during the last six years since the 2008 financial banksterism crisis, even after taxpayer and state intervention rescued the US economy from annihilation by disaster capitalism. In other news, wealth has more than doubled for the super-rich since 2009 alone. The latest edition of the Credit Suisse Global Wealth Databook holds that 10 percent of Americans own more than 75 percent of the wealth. Thus, the US happens to be the most unequal of all “advanced economies” in the world.

Technology and globalization have also caused a “wage surge,” which grew shares of upper income for a modicum of workers—the so-called “working rich.” Nevertheless, the concentration of wealth in the US still provides for only few capitalists to invest in fixed capital. In the US, some might invest in “fixed assets,” such as technology and skilled workers, or factories and machines. While this investment does not lessen the risk relative to potential rewards more so than, say, employing a large workforce at lower wages to do the same amount of work (or, to increase absolute surplus value rather than relative surplus value), it does mean employing fewer workers at possibly higher rates of efficiency. This can also work to the advantage of the capitalist in a super-industrialized nation like the US.

According to former US Secretary of Labor, Robert Reich, 400 Americans have more wealth than the bottom 150 million combined. This means that very few Americans truly have the individual agency and capital to make the abovementioned investments in fixed capital. And so, if technology has equipped a smaller number of workers to be able to produce more, then those investments surely profit the already rich elites. That the supply of workers seeking skilled jobs well exceeds the demand thereof (and which contributes to general unemployment) is yet another major outcome. This predicament can drive middle-income workers to seek out lower-income employment so as to afford the amenities that allow workers to subsist. Even the Wall Street Journal described the growing use of technology as a lynchpin for inducing greater capitalist gains than compensation for the “educated” worker.

The layperson might rightfully ask why education matters so much here. The fact is, education has been a key investment in American human capital since at least the Northwest Ordinance of 1787. Plans stipulated a public university be established in the Ohio Territory so that “morality and knowledge being necessary to good government and the happiness of mankind, schools and the means of education [should] forever be encouraged.” Today, students assume loans to pay for education in the centuries-old hope that investing in their own human capital will eventually land them a job that pays. Yet, in his article entitled “The Legacy of Debt”, sociologist David Fasenfest reports that bank profits from “private student loans exceed that of Apple Computing and Exxon-Mobil combined.” He also notes that student loan “indebtedness” amounts to more than one trillion dollars, making it “one of the largest categories of personal debt” for Americans. Before would-be students even enter the workforce, their loans already serve to enrich the increasingly plutocratic capitalist class.

If technology has played a role in polarizing the American workforce (beginning with loans for schooling), then it should be recognized that technology and fixed capital have always been leveraging implements central to the capitalist class’ social overlording. Technological advancements have undermined solidarity among workers, which has in turn caused the dissolution of unified worker action. This has also enabled a globalized economy to extract wealth without necessarily increasing compensation for work, and without increasing the number of jobs available. But technology in and of itself is not necessarily bad. Simply put, it is just as any other element of the current global economic system: not fully escaped from the gravity of capitalism or capitalism’s master class.

In 1867, Karl Marx published in Das Kapital exactly why technology might be used against the workers themselves:

All methods of the production of surplus-value are at the same time methods of accumulation, and every extension of accumulation becomes, conversely, a means for the development of these methods. It follows therefore that in proportion as capital accumulates, the situation of the worker, be his payment high or low, must grow worse.

Accruals of capital through profit, interest, rent, dividends, etc., have been main sources of income growth for the capitalist class in America in the last few decades. For workers, though, there has always been a far-reaching and continual reduction of their share in national income despite generating wealth through their labor. While capitalists gained extreme financial power over the last forty years, and partly at the expense of stagnating worker’s compensation, the increasing costs of healthcare, housing, and education have continued to oppress workers well into the millennium. It is not safe to assume, however, that students and workers, or the public in its entirety, has finished reacting to this.

Mateo Pimentel lives on the Mexican-US border. Follow him on Twitter @mateo_pimentel, or read more at guerrillaprose.info.

War by Media and the Triumph of Propaganda