The Meme of “Russian Aggression” 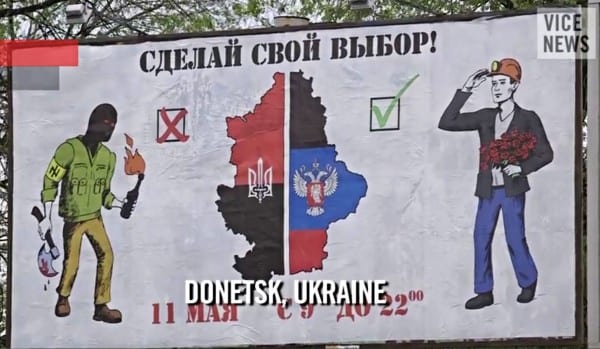 Billboard in the Donetsk Republic urging people to choose independence from Kiev. Major parts of East Ukraine held internationally observed referenda in 2014. The vote was widely regarded as legitimate. Luhansk, Donetsk, and the Crimea chose severance from Kiev’s putschists’ rule, but the West’s propaganda machine has continued to describe the developments as a  Russian takeover. (Karl-Ludwig Poggemann, via flickr)

[dropcap]“Russian aggression”[/dropcap] is the BBC’s meme of the day. I lost count of how many times the phrase popped up in the first 15 minutes of Radio 4’s World at One programme, devoted entirely to the ‘Russian problem – but the theme was drummed in relentlessly.

The idea is that Russia presents a huge a growing threat to world peace and stability. Russian bombers are threatening the ‘English’ Channel (albeit strictly from international airspace). Russia is an expansionist power attacking sovereign nations, Ukraine in particular. And watch it – we’re next!

Commentators wheeled into the studio were unanimous in their views. NATO must stand up to the threat. Presient Vladimir Putin is a dangerous monster who refuses to abide by the rules of the international order. NATO countries must increase their defence spending to counter the Russian menace.

Not a single moderating voice was included in the discussion. No one to ask Jens Stoltenberg, Secretary General of NATO, if alliance aircraft ever fly close to Russia’s borders (they do). No one to point out that the real Ukrainian narrative in is not that of Russia’s ‘annexation’ of Crimea – but of NATO’s US-led annexation of Ukraine itself.

The BBC’s palpable degeneracy mirrors the rapid evisceration of British democracy as the nation transitions into an adjunct of the American empire.

No one to argue that Russia’s assimilation of Crimea was effected with hardly a shot being fired, backed by overwhelming support in a referendum which reflected the popular will – and if you’re in any doubt, just compare it to Israel’s ongoing and endlessly justified annexation of Palestine.

The lies are in what the media don’t tell us

There was no one to discuss NATO’s plan to expand right up to Russia’s boundary with Ukraine, string its missile launchers along the frontier, and to seize the Sebastopol naval base, home to Russia’s Black Sea fleet, and hand it over to the US Navy. Aside: how would the US react if Russia tried that trick in Mexico and Guantanamo, Cuba?

While BBC news is prepared to speak of the million or so refugees from fighting in the Eastern provinces, there is no mention that those refugees have overwhelmingly fled to safety in Russia – a peculiar choice of destination if Russia is indeed the aggressor in the conflict.

Nor is there any mention that the massive humanitarian crisis in Eastern Ukraine that forced the refugees from their homes is overwhelmingly caused by the NATO / Kiev campaign of shelling and rocketing civilian areas of Donetsk and other cities. Or that local rebels’ fierce and ultimately victorious battle for the airport terminal was necessitated by its use as a base for Kiev’s heavy artillery to massacre the ordinary citizens of Donetsk.

And of course the BBC would never reveal, in other than the most guarded terms, that the real threat to world peace and stability is not Russia, which has more than enough resources – and problems to occupy itself with – within its own boundaries, but … NATO itself, and the wider Atlantic Alliance.

The other big threat the BBC endlessly warns of is that of Islamic extremism. But does it ever point out that, until recently, three independent secular regimes stood as firm bulwarks against Islamic extremism: Iraq, Libya and Syria? And if we go back a little further, why not add in Afghanistan, where the US created Al Qaida to overthrow a moderate Islamist regime?

And does the BBC ever point out that it is the deliberate destruction of these secular or moderate regimes by NATO and its allies that created the void that has been filled by Islamic State? And has lead to the growth of Islamic fundamentalism in north and west Africa, including the murderous Boko Haram?

Or does it ever let slip that 15 of the 19 9/11 hijackers were in fact citizens of Saudi Arabia, our great ally in the Middle East, and that this made NATO’s choice of Afghanistan as the country to go to war against a little … paradoxical?

It’s deju-vu all over again …

Anyway – the BBC’s dismal performance today on “Russian aggression”stirred up memories – memories of the run up to the Iraq war, when the BBC was similarly gung-ho in its depictions of Saddam Hussein as a real and present danger to us all, whose ambitions had to be countered by military force.

This gives me to cause to fear that we are being softened up for war. But this time, there’s a difference. Saddam’s weapons of mass destruction were, as many of us suspected, but we all now know, an invention of our mendacious politicans and intelligence services.

But Russia’s nuclear weapons are all too real, as is the danger they present. A full scale nuclear war would be an unthinkable disaster for all people and the entire planet. Yet NATO is deliberately baiting the Russian bear, and what we are now seeing, in Russia’s so called ‘aggression’, is that Russia is getting cross, and defensive. As they have very right to.

So what is NATO’s motivation? One simple reason is that NATO was set up as a cold war military alliance, and with the end of the cold war its raison d’etre evaporated. Simply put, we no longer need it, and its drain on our resources. So, the NATO logic goes, we had better start making some reasons fast. Which is exactly what they are doing.

Another reason is the US’s aspiration for a ‘unipolar world’ in which it enjoys ‘full spectrum dominance’. These ideas are those of the neocons who enjoyed supremacy under the presidenices of George W Bush. But they have now become the core philosophy of the American Imperium – and Barack Obama adheres to them as firmly as ‘Dubya’ ever did.

First, don’t fall for it!

So what, as ordinary citizens, can we do to block this push to a war that could, literally, annihilate civilization and much of life on planet Earth?

First, don’t fall for the vicious anti-Russian propaganda that the BBC and other news outlets relentless spout at us. Second, talk about it – with friends, family and down the pub. Share this article, and these thoughts, on social media.

Third, make it an election issue. Push electoral candidates in your area on where they stand. Emphasize the importance of making peace with Russia, rather than goading it into a wholly unnecessary and stupid war. Tell them your number one election priority is not the NHS, not immigration – but peace!

And remember – it can work. In August 2013 NATO was all set to go to war on Syria on the grounds – entirely unsupported by evidence – that President Assad was waging chemical warfare against his enemies in the civil war unleashed by … NATO, its member states and allies.

Overwhelming political pressure on MPs, and Labour MPs in particular, caused Ed Miliband to back out of a tentative agreement to back Cameron’s military adventurism. On 30th August the Commons vote for war was lost. In turn this undermined the US’s drive to war.

And while the situation in Syria remains dreadful, it’s surely nothing like as bad as it would have been with the additional devastation of millions of tonnes of NATO bombs. Just look at the failed states we have created in Afghanistan, Iraq and Libya to see how bad things can get.

Yes, it’s hard for the essential sanity and peacefulness of ordinary people and families to prevail against the world’s most powerful military and propaganda regime. That’s why we need to be constantly bombarded with media lies: to overcome our right and proper horror of war, and manipulated into risking our lives, health, prosperity and wellbeing, all for a false cause of futility and destruction.

But it can be done. And for all our futures, for all generations to come and for Earth herself, sanity must prevail.

The Fact-Checked Adventures of Brian Williams

The Key That Is the Saudi Kingdom