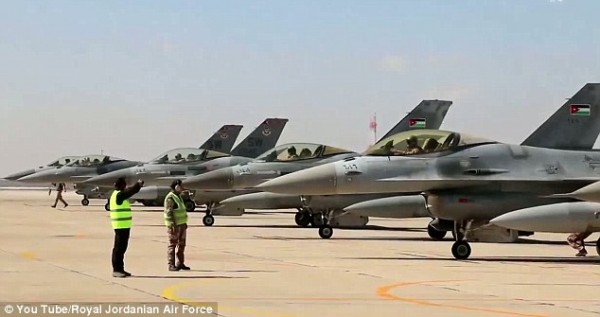 Show of force: A fleet of Jordanian F-16 fighter jets are lined up at a base ahead of air strikes in Syria and Iraq. The pilot’s brutal execution has (as expected) inflamed tribal passions among Jordanians. They’re all playing into Washington’s hands.  (Screengrab, DailyMail)

[dropcap]T[/dropcap]he release of a video showing the immolation of captured Jordanian pilot First Lt. Moaz al-Kasabeh by the Islamic State of Iraq and Syria (ISIS) has been followed by a wave of hypocritical moralizing, combined with threats of more violence, from the imperialist powers and their regional allies.

The killing of al-Kasabeh, which apparently took place in early January, not long after the fighter jet he was piloting crashed in Syria, has evoked revulsion among ordinary people around the world. It is a reflection of the backward and reactionary character of ISIS.

However, this act did not occur in a political vacuum. Both ISIS and the disaster unfolding in Iraq and Syria are the direct products of the criminal policies of the governments that now proclaim their moral indignation.

The imperialist leaders, beginning with US President Barack Obama, see the latest ISIS atrocity as an opportunity to bombard the public with lurid details and fear-mongering propaganda in an attempt to overcome antiwar sentiment. As with last month’s Charlie Hebdo killings, Tuesday’s execution will be used to justify an expansion of the current war in the Middle East in the name of fighting the “war on terror.”

Recent days have seen a barrage of statements from US politicians and current and retired military and intelligence officials demanding the introduction of thousands more US ground troops into Iraq and an escalation of the campaign to overthrow the government of Bashar al-Assad in Syria, including calls for the establishment of no-fly zones in that country.

The criminal mess the Americans created in the Mideast provides justification for a sanctimonious expansion of the same mess, now rapidly incorporating regional states as allies of yet one more US ad-hoc war “coalition”.  How many lies can the US public absorb?

On Tuesday, Obama denounced “the viciousness and barbarity” of ISIS and added, “This organization appears only interested in death and destruction.” Secretary of State John Kerry said the execution of Kasabeh “reminds of all of the evil of this enemy.”

What colossal hypocrisy! Obama speaks as the head of a state that has brought “death and destruction” on a mass scale, deploying the most advanced and lethal weapons against virtually defenseless populations in an effort to grab control of the Middle East’s vast energy reserves. 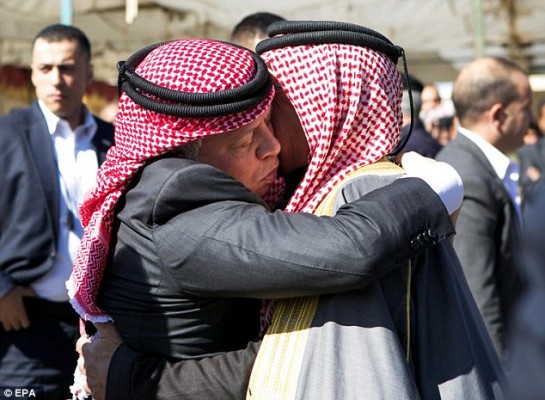 Reports The Daily Mail: “Jordan’s King Abdullah II  hugs Saif al-Kassasbeh, father of Jordanian pilot Moaz al-Kasasbeh, during a trip to the family’s ancestral home. The King promised a ‘harsh’ revenge for Kasasbeh’s brutal death.”  The paper does not mention the most important piece in the puzzle, that Abdullah II is also a notorious Western puppet. (Screen grab)

In Iraq, the US “shock and awe” invasion and occupation toppled the secularist Saddam Hussein and installed a sectarian Shiite puppet regime that carried out mass killings of Sunnis, triggering a sectarian war that continues to this day.

Washington systematically destroyed one of the most advanced societies in the Middle East, employing criminal methods captured by names such as Fallujah, Abu Ghraib and Haditha.

The United States has been waging war against the country—economic or military—for 25 years, since the imposition of crippling sanctions in 1990 and the first Gulf War of 1991, with a pause of less than three years between 2011 and 2014. The 13 years of sanctions, punctuated by bombing attacks, from 1990 to 2003 killed more than 1 million Iraqis, including hundreds of thousands of children.

Serious estimates of the number of Iraqis who died as a result of the 2003 invasion and subsequent occupation of the country range from several hundred thousand to over 1 million. As of 2007, it was estimated that 2 million Iraqis had fled their homeland and another 1.9 million had been reduced to the status of displaced persons within their own country. That amounts to 15 percent of the country’s population.

The United States destroyed Iraq’s water and sewage system, crippled its power plants, decimated its health care system, and virtually destroyed its educational system. Between 1990 and 2005, Iraq recorded a 150 percent increase in the rate of infant deaths. By the fourth year of the US occupation, less than a third of the population had access to clean drinking water and just 19 percent had a functioning sewage system. The result was rampant diarrhea, typhoid and hepatitis. Half of the country’s children suffered from malnutrition. 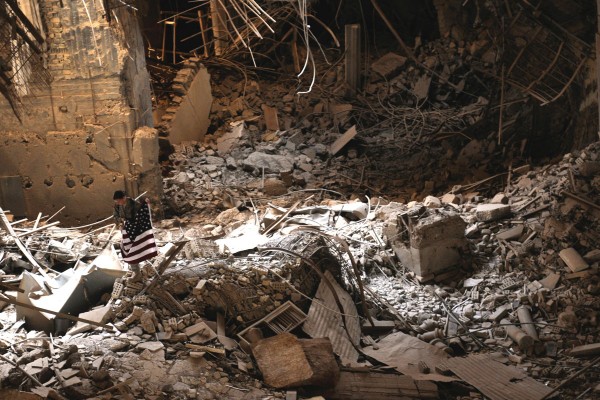 With total impunity, the US has turned Iraq in one gigantic heap of rubble. Many soldiers—more ignorant and brainwashed that

There is no precedent for this systematic destruction of an entire society through violence and criminality since Hitler’s armies ravaged Europe in the Second World War.

It is out of this devastation that ISIS emerged. It is a creation of US imperialism both in the general sense that Al Qaeda in Iraq, the forerunner of ISIS, arose on the ruins of Iraqi society at the hands of the United States, and in the more specific sense of direct American backing for it and other jihadist groups.

The US strategy for dominating the Middle East has involved the financing, arming and training of Islamist forces targeting secular regimes—in Afghanistan, Iraq, Libya and Syria—considered to be obstacles to the American corporate-financial elite’s pursuit of global hegemony.

In Syria, the US directly armed and trained ISIS fighters, establishing a CIA base in Jordan for that purpose. Its regional allies in the war for regime change against Assad, including the Saudi and Qatari monarchies, lavishly funded ISIS and other Al Qaeda-linked groups, such as Al Nusra. As long as ISIS was targeting Assad, Obama had nothing to say about the group’s sectarian killings and other atrocities against Shiites.

Only when ISIS moved into western and northern Iraq and threatened US interests in Iraq and the wider region did the Obama administration proclaim its “evil” nature and launch an illegal war in both Iraq and Syria to check its advance.

Over the past several months, the actions of ISIS—in particular, the various videotaped executions—have served as well-timed justifications for the US and its allies to expand their involvement in a renewed war in the Middle East. As always, the moral hypocrisy of imperialism is the precursor to even greater crimes to come.

Barry Grey is a senior editorialist with the wsws.org. organ of the Social Equality Party.

Iraq’s Children: Ever Expendable – From Madeleine Albright to “Save the Children.”

Ten Reasons Why We Should Celebrate the Inevitable Nuclear Holocaust