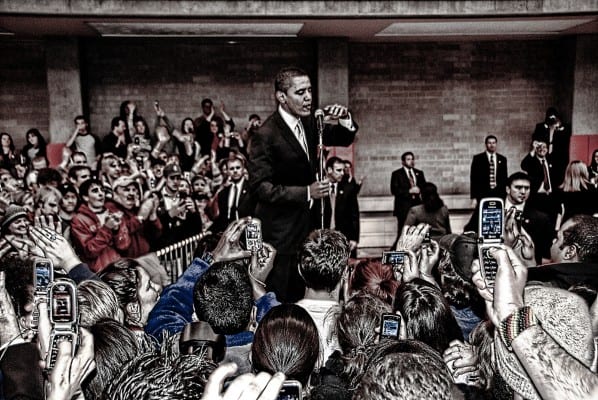 A natural demagog, Obama has turned out to be the perfect shill for the corporate elites. (Chris Coleman, via flickr)

[dropcap]O[/dropcap]n Wednesday, the Obama administration sent to Congress its proposal for a new Authorization for Use of Military Force (AUMF), ostensibly targeting the Islamic State of Iraq and Syria (ISIS). Obama accompanied a draft of new legislation to rubber-stamp an escalation of war in the Middle East and beyond with an eight-minute announcement from the White House Wednesday afternoon.

Both the proposed resolution and Obama’s announcement were shot through with lies and double-talk aimed at concealing the far-reaching implications of what is being proposed.

The draft sent by Obama requests that Congress give its approval for military operations against ISIS or “associated persons or forces,” defined as anyone “fighting for, on behalf of, or alongside ISIL [ISIS] or any closely-related successor entity in hostilities against the United States or its coalition partners.” This is formulated so as to potentially include organizations or individuals as diverse as Islamist groups in the Middle East and North Africa, homegrown “cells” in Australia, France or the United States itself, or anyone the US claims is aiding and abetting ISIS.

There are no geographical limits to the military action sanctioned by the resolution. Making clear the global framework of the new “war on ISIS,” Obama wrote in a letter to Congress that ISIS could “pose a threat beyond the Middle East, including to the United States homeland.”

The inclusion of language ending the authorization in three years unless the resolution is renewed has as much significance as similar “sunset” provisions in the Patriot Act, which has been routinely reauthorized by Congress. In his announcement of the AUMF, Obama stressed that the three-year framework did not represent a “timetable” for military action and could be extended by Congress under his successor in the White House.

In an attempt to delude the American public, which is overwhelmingly opposed to war, that the new operations are to be limited in scope, the authorization states that it does not provide for “enduring offensive ground combat operations.” Again, the wording is formulated so as to allow virtually any type of military action. There is no definition of “enduring” or “offensive.”

Extended combat operations in Iraq, Syria or another country could be justified on the grounds that they were “defensive” or not “enduring.” The use of Special Forces units will probably increase throughout the region.

Obama claimed that the resolution “does not call for the deployment of US ground combat forces in Iraq and Syria.” This is simply a lie. Obama last year deployed 1,500 US troops to Iraq, many of which have already been involved in combat operations. The authorization would sanction a vast expansion of such operations.

To date, the administration has sought to develop local forces in Iraq and elsewhere to engage in heavy fighting, with US soldiers participating in an “advisory” capacity and engaging in Special Operations attacks. This could quickly change, as Obama made clear by noting that the resolution provides the “flexibility we need for unforeseen circumstances.” At the very least, the new proposal would authorize the deployment of combat forces within Syria so long as they are declared to be limited and “defensive.”

The entire proposal is thoroughly cynical, a pseudo-legal fig leaf to provide political cover for an illegal war. The way that the new authorization has been proposed—including a perfunctory White House announcement held in the middle of the afternoon—underscores the contempt of the political establishment for basic democratic procedures and the will of the American people. All decisions on military action are made behind the scenes by a cabal of military and intelligence officials, with Obama as their spokesman.

As recently as 2002, in advance of the Bush administration’s invasion of Iraq, the political establishment felt it necessary to go through the motions of a Senate debate and vote, with a presentation of supposed facts (i.e., fabrications) and arguments to justify war. Now, wars and military operations are simply launched and presented to the population as a fait accompli.

The proposed congressional authorization for war against ISIS comes nearly half a year after the Obama administration initiated bombing in Iraq and Syria. There have already been at least 2,000 air strikes in this latest round of the US drive to conquer the Middle East.

The war authorization request marks the latest stage in the long and tragic encounter of the peoples of the Middle East with US imperialism. The White House proposal would repeal the 2002 authorization for military force in Iraq, which, following the 1991 Gulf War and a decade of brutal sanctions, was used to invade Iraq and initiate a war that led to the deaths of over one million Iraqis and laid waste to the entire country. ISIS itself is a product of this devastation as well as US support for Islamic fundamentalist forces that have served as proxies in the US-led wars to overthrow Gaddafi in Libya and oust Bashar al-Assad in Syria.

In asking for the new authorization, Obama was at pains to insist he did not need it, and that strikes would continue regardless. “Existing statutes provide me with the authority I need,” he wrote in his letter to Congress.

This was a reference to the 2001 Authorization for Use of Military Force passed after the September 11 attacks, which has been used as the legal pretext for a series of wars and interventions, including (according to the Congressional Research Service) Afghanistan, the Philippines, Georgia, Yemen, Djibouti, Kenya, Ethiopia, Eritrea, Iraq and Somalia. It has also been used, directly or indirectly, as a pseudo-legal justification for drone assassinations (including of American citizens), abductions, torture, military tribunals, indefinite detention, domestic spying on a mass scale and the establishment of the framework of a police state, including the Patriot Act, the Homeland Security Department and the Northern Command.

Obama has adopted and extended the standpoint of his predecessor that the president has the right to unilaterally order military operations all over the world. The ostensible check on this power laid down by the US Constitution—that only Congress can declare war—has long been rendered a dead letter. As it is, the final language of any resolution that passes Congress will likely be even more open-ended.

The new AUMF is, if anything, even more broadly worded than its predecessor. As with the measure passed in 2001, the proximate target—in this case ISIS—provides a basis for operations aimed at ensuring US domination over key economic and geostrategic areas of the world. It is being introduced at the same time that the US threatens to unleash a European-wide war with Russia over Ukraine, intensifies its operations in Africa, and continues a “pivot to Asia” aimed at militarily and economically encircling and isolating China.

Obama concluded his White House announcement with the assertion that the new authorization does not place the US on a “perpetual war footing.” In fact, unending war, plotted behind the backs of the population, has become the permanent and essential feature of American foreign policy.

Joseph Kishore is a senior editorial writer with wsws.org.

For the record: Obama’s lies on Ukraine