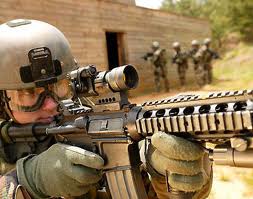 The US Congress and White House are currently in discussions over the federal budget for the upcoming fiscal year, which begins in October. Amidst the various tactical disputes over ruling class policy, on one issue there is near-universal agreement in Washington: there must be a significant and immediate increase in funding for the already gargantuan Pentagon war machine.

The lead in this campaign has been taken by the White House, with Obama’s new defense secretary, Ashton Carter, declaring Wednesday that the president would veto any budget that did not remove the so-called “sequester” caps on military spending introduced in 2011. While Congress has found various ways to get around these caps over the past several years, the Pentagon is insisting that they be formally eliminated.

In his testimony, Carter outlined the basic considerations motivating this demand. “In order to ensure our military remains the world’s finest fighting force, we need to banish the clouds of fiscal uncertainty that have obscured our plans and forced inefficient choices. We need a long-term restoration of normal budgeting and a deal… that lives up to our responsibility of defending this country and the global order.” 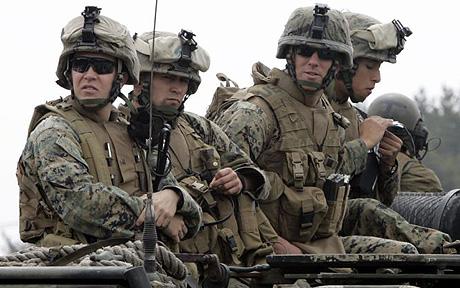 Here, the pretense that the US is engaged in a campaign to defend human rights or ensure democracy is all but dispensed with. The United States “must protect the homeland, build security globally, and project power and win decisively,” the defense secretary declared. In other words, the US military must be in a position to conquer the world, and it must have unlimited funds at its disposal in order to do so.

The United States more and more resembles a garrison state, in which enormous funds are diverted to finance instruments of repression and war. The scale of the US military today dwarfs anything that could have been imagined by President Dwight Eisenhower when he warned more than a half century ago of the power of the “military-industrial complex.”

Even as they pump billions more into the US war machine, Democrats and Republicans alike insist that funding for core social programs such as Medicare and Social Security must be cut.

Obama’s budget calls for $561 billion in “base” military spending. This figure, which is $38 billion above the sequester cap, does not include $51 billion in supplementary war funds included in the Overseas Contingency Operations (OCO) budget. In their own budget proposal, House Republicans have formally adhered to the spending caps, while funneling tens of billions of additional funds into the OCO in order to make up the difference. 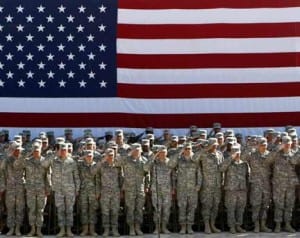 By way of comparison, Obama’s budget calls for only $70 billion in discretionary spending for the entire Department of Education and $84 billion for Food Stamps, to service a caseload of about 46 million people requiring nutrition assistance. The budget allocates about $7 billion for emergency disaster relief.

Even as they pump billions more into the US war machine, Democrats and Republicans alike insist that funding for core social programs such as Medicare and Social Security must be cut.

The Pentagon budget, according to Carter, is needed to finance a force of nearly two million troops—Army, Navy, Marine Corps and Air Force—or close to one out of every 150 American citizens. The military is also planning to purchase an array of new equipment to expand its already enormous war machine.

The Navy wants two new missile destroyers, at a cost of between $1.5 billion to $2 billion apiece, to deploy in Europe or Asia. The Air Force is angling for hundreds of new F-35A fighter planes, at more than $100 million each. Billions are to be allocated to purchase drones used to rain down bombs on the Middle East and Africa, at a cost of tens of millions of dollars each.

The discussion over the funding of the military underscores the basic fact that war has become the centerpiece of ruling class policy in the United States. On the eve of the dissolution of the Soviet Union in 1991, President George H.W. Bush declared a “new world order”—a permanent Pax Americana.

However, the fall of the USSR did not signal the final triumph of American capitalism. Rather, it marked a new stage in the global crisis of the nation-state system and breakup of the post-World War II international equilibrium, which had been anchored by the economic and industrial dominance of American capitalism. At the heart of this crisis was the protracted decline in the world economic position of the United States—a process that accelerated after the demise of the Soviet Union.

No longer feeling constrained by the presence of the Soviet Union, the US corporate and financial aristocracy sought to offset America’ economic decay by relying on its still-dominant military power to threaten, bully, attack and, where necessary, destroy would-be challengers to US world supremacy.

Nearly a quarter century later, the United States is engaged in an unending series of invasions, occupations, counter-insurgency wars and covert operations in nearly every corner of the globe. It is also seeking to conquer outer space and is waging war in cyberspace.

According to one count, US military or Special Operations Forces were deployed in 133 countries last year—that is, 70 percent of the planet’s nation states. This includes open wars as in Iraq and Afghanistan; the expanded “war on terror” throughout the Middle East and North Africa; the massive military buildup against Russia in Eastern Europe; and the “pivot to Asia,” which involves a network of military bases and alliances directed against China.

American imperialism’s futile and mad attempt to counter its long-term economic decline by military means has produced one disaster after another. Every country that has had the misfortune of entering the crosshairs of US imperialism had been plunged into chaos. But none of these bloody operations have halted the decline of American capitalism or the rise of competitors such as China.

The debacles produced by Washington’s reckless resort to military violence have only propelled the ruling class to broaden the scope of its military operations, expand the list of potential enemies, and prepare quite consciously and deliberately for world war.

The contradictions confronting American imperialism were revealed this month when Germany, France, Britain and Italy delivered a humiliating blow to the United States by joining the China-sponsored Asian Infrastructure Investment Bank, despite direct appeals from the Obama administration. The major imperialist powers, compelled to advance their interests within the framework of the US-dominated post-World War II order, are remilitarizing and beginning to chart a course that will inevitably lead some of them—Germany? Japan?—into direct conflict with the United States itself.

In the transformation of Pax Americana into Bellum Americanum, there is another factor that is of immense significance: the enormous social contradictions within the United States itself. The combination of rapacious plundering by the financial aristocracy and ever-increasing demands by the military-intelligence apparatus has bankrupted American society. Social tensions are at a breaking point.

Hence the ruling class’ deployment of its military power ever more directly against social opposition at home, through the integration of the police with the military and intelligence agencies to form a “total army.”

The crisis of American capitalism—both external and internal—also points to the means through which the looming threats of nuclear war and dictatorship can be opposed: the class struggle and social revolution.

Joseph Kishore is a senior political analyst and editor with wsws.org.

Michael-Parenti: Democracy and the Pathology of Wealth