Chris Hedges on Bernie Sanders and the Corporate Democrats 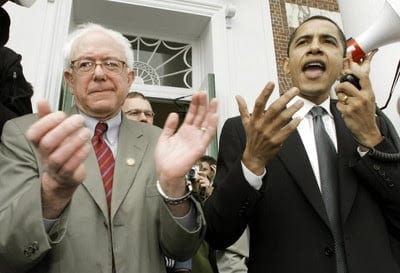 “Bernie Sanders wants to break up the New York banks, he wants to impose a Wall Street transaction tax, he wants to regulate drug prices, he’s for full Medicare for all — everybody in, nobody out, free choice of doctor and hospital — he wants to get rid of these corporate tax havens, he’s pushing for a $15 dollar an hour minimum wage, he wants stronger labor unions. What’s not to like?” Nader asked Hedges.

“Because he did it within the Democratic establishment,” Hedges said. “He’s lending credibility to a party that is completely corporatized. He has agreed that he will endorse the candidate, which, unless there is some miracle, will probably be Hillary Clinton.”

“So what he does is he takes all of that energy, he raises all of these legitimate issues and he funnels it back into a dead political system so that by April it’s over.”

“That was the role of Van Jones in the last election,” Hedges said. “He was running around, using the language of Occupy — Occupy the Vote — and that is what Bernie has done. I don’t understand. He fought the Democratic establishment in Vermont his entire career. Now he has sold out to it.”

“Bernie has also not confronted the military industrial complex at all,” Hedges said. “On a personal level, having spent seven years in the Middle East, I’m just not willing to forgive him for abandoning the Palestinians and giving carte blanche to Israel. He was one of 100 Senators who stood up like AIPAC wind-up dolls and approved Israel’s 51-day slaughter last summer of Palestinians in Gaza — the Palestinians who have no army, no navy, artillery, mechanized units, command and control.”

Hedges, who was on the show to promote his new book Wages of Rebellion: The Moral Imperative of Revolt (Nation Books, 2015), said that we need independent political candidates. 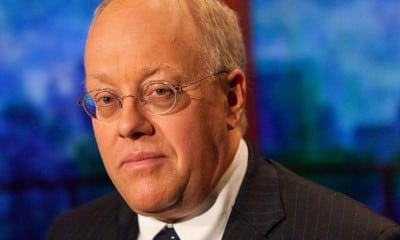 “That’s why I was a strong supporter of your independent runs,” Hedges told Nader. “That’s why I voted for (Green Party Presidential candidate) Jill Stein in the last election. But they have to be outside the system. And we have to begin to build movements that are divorced from the Democratic and Republican parties. My fear is that by this time next year, Bernie Sanders is running around once again repeating this mantra of the least worst and stoking fears against whoever the Republican candidate is. And we’ve gone nowhere.”

“We’ve seen that routine before,” Nader said. “Unfortunately, Dennis Kucinich had to toe the line. He was done by April. They even kept him out of some of the debates. Yes, we have seen it before. They are done by April. And then they are forced into a loyalty oath to whoever wins the nomination. And of course, it’s invariably the corporate Democrats.”

“Because the party is completely captive to corporate power,” Hedges said. “And Bernie has cut a Faustian deal with the Democrats. And that’s not even speculation. I did an event with him and Bill McKibben, Naomi Klein and Kshama Sawant in New York the day before the Climate March. And Kshama Sawant, the Socialist City Councilwoman from Seattle and I asked Sanders why he wanted to run as a Democrat. And he said — because I don’t want to end up like Nader.”

“The lie of omission is still a lie,” Hedges said. “Bernie’s decision to play the game within the Democratic Party and in essence lend credibility to the party and lend credibility to Hillary Clinton is very destructive. A liberal feeding frenzy within the Democratic Party would see a rise of an actual liberal establishment  within the party  – I’m not sure one exists any more — that challenged the Party for selling out working men and women.”

“Senator Joe Lieberman — he goes (in 2008) and he endorses McCain at the Republican National Convention against Obama and he comes back after Obama wins to Washington and they give him a major chair of a major Senate committee,” Nader said.

Syriza Betrays Greece’s No Vote: Why the Left Should Form a Popular Front Against the EU

How America Defeated the Soviet Union in 1951

The author infers a great deal from the single comment, “I don’t want to end up like Nader.” You assume he doesn’t want to lose his committee chairmanships, etc. Perhaps he doesn’t, but most likely what he meant was that he didn’t want to invest time and energy into a campaign where the important points he has to make are ignored and where he ends up with a tiny percentage of the vote. Sanders has said many times he is trying to build a movement, raising people’s awareness of extremely critical issues. Did Nader build such a movement? No. Did… Read more »

Points very well taken, and we appreciate the comment. However we should like to point out that Sanders achievements—such as they are—may be in themselves a reflection that he is not actually who many followers thinks he is, pushing against the grain of the system, against Zionists influences in policy, etc., and it is in that manner that he is being read by the powers that be, who have given him a semi-decent hearing on their media, a favor denied those perceived as hardcore, like Nader or Stein. As a number of articles on this site have carefully pointed out,… Read more »