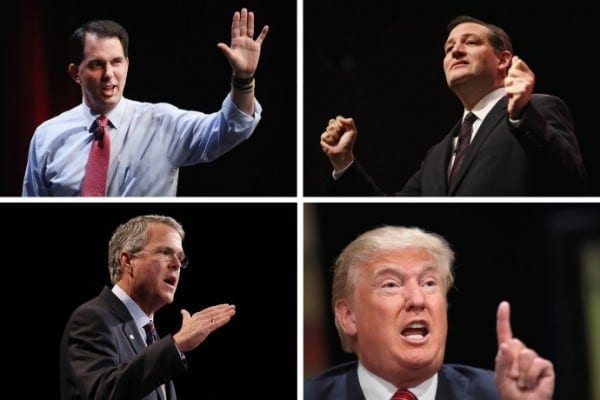 GOP contenders among “Borowitz’ Top Ten Narcissists”. Clockwise: Walker, Cruz, Trump, and Bush.  Fox “News” is now even usurping the right to nominate the final contenders for the throne.

[dropcap]S[/dropcap]omething very odd and historically unique is about to happen (or by the time you read this will have already happened) in U.S. politics.  The Republican Party’s Ministry of Propaganda (in this case known as the Fox”News”Channel), along with the Unlimited Anonymous Campaign Spending Act (otherwise known as “Citizens United”), is about to displace that party as the leader of Right-Wing Reaction in the United States.   I know, I know, “Citizens United” was a Supreme Court case.  But that was only on paper.  The decision was about something that should have been the subject of legislation — campaign spending — and it was made by the most openly and frankly Republican Court since the time of the New Deal.

There have been ministries of propaganda since before the times of ministries.  Ruling classes have had messages that they have wanted to be transmitted to the masses since there have been ruling classes and masses.  Although it served what most observers (although not all — see, e.g., “Golden Dawn” in Greece and the Azov Battalion in Ukraine)  have considered a most evil purpose, Josef Goebbels’ Nazi Ministry of Propaganda has also been held up as the prime “how-to-do-it-right” (as well as Right).  The Big Lie, the emotional rallies, the dog whistles at the beginning, the theme of Die Heimat (homeland) is ours, the demonization of population identity groups including immigrants, and so on and so forth.  But Goebbels’s Ministry always served the interests of the Party.  What we see now, this very week, is the Ministry getting out in front of the Party and getting it to serve its own purposes (which include selecting the Party’s Presidential candidate, or at least, let’s say, the top three choices — who will then be quite beholden to Fox ”News.”). 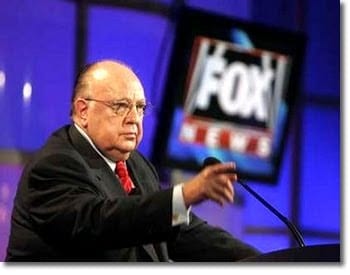 Roger Ailes: America’s own adipose Goebbels, Murdoch’s out of control henchman, and a figure of consistent and irrefutable malevolence. Because such men exist, countless people suffer and die.

For here we have the Republican “Debate,” (really an opportunity for candidates to give mini-versions of their stump speeches, with a modicum of interaction), as defined by the Fox ”News” Channel.  It was founded by Rupert Murdoch in 1996. Since that time the one-time Republican political-operative Roger Ailes — who had worked for Nixon, Reagan, GHW Bush, and Rudy Giuliani — has been at its head.  And, as attested to by such media watchdogs as Media Matters, it has been nothing if not the Propaganda Channel for the Repubs.

Fox set up the debate.  Fox picked the date.  Fox chose the “moderator,” Megyn Kelly (nee Kendall, whose chief claim to fame so far is that she ushered Karl Rove down the hallway at Fox”News” on election night, 2012, so that he could be told by Fox’s own man that his, Rove’s, election cheating scheme hadn’t worked that time.  And from there she walked right into her own prime-time show.)  Most importantly, Fox is determining who is and who is not going to allowed to appear in the prime-time version.  (Andy Borowitz refers to them as “The Top Ten Narcissists” in America.)  The Party is taking, some would say has been shoved, into the back seat, by its propaganda channel.

And how could this happen?  Not by chance, folks.  Citizens’ United has made it possible for candidates to run completely independent of the party, while using the label, should they choose to do so.  Until recently I thought that C.U. was different only in degree, not in kind, from previous election financing regulations.  The ruling class always controls the state and the political structures that populate it.  But one of the reasons parties have been able to exert major control of the process has been through controlling, at least in part, the purse strings.

Now that connection has been sundered.  C.U. has created substantive change in U.S. politics, bringing money and politicians closer than they have ever been, and making it possible for the expenditure of unlimited amounts of money (much of it contributed anonymously) in election campaigns.  The Adelson and Koch ”primaries” for raising major money are in the process of pushing the primaries in which  people actually vote into positions of lesser importance.  To me this represents a major change in the history of politics.  For the first time in history, the Ministry of Propaganda, in tandem with totally unregulated political financing, are leading and the party the Ministry supposedly serves is following, with the candidates getting ever-closer in the grip of the ruling class leadership.  It will be absolutely fascinating to follow to where this winding trail will lead. 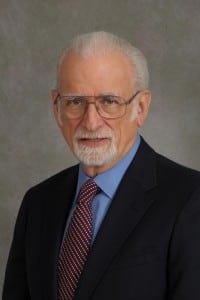 Is White Supremacy a Mental Disorder?

“Whot, me worry ?” Alfred E. Neuman….First the media wonks ravage the Donald. Now they eulogize him: slaves to power! Wait for the ascension of Joe Biden, but as Marx said: “History repeats itself, first as tragedy then as farce.” We are living in the Poseidon Adventure.