Home ABOMINATIONS A Game of Dice With Russia: “Do You Realize What You Have Done?”

A Game of Dice With Russia: “Do You Realize What You Have Done?”

“Let’s hope, as Otto von Bismarck said, that “there is a Providence that protects idiots, drunkards, and the United States of America…” 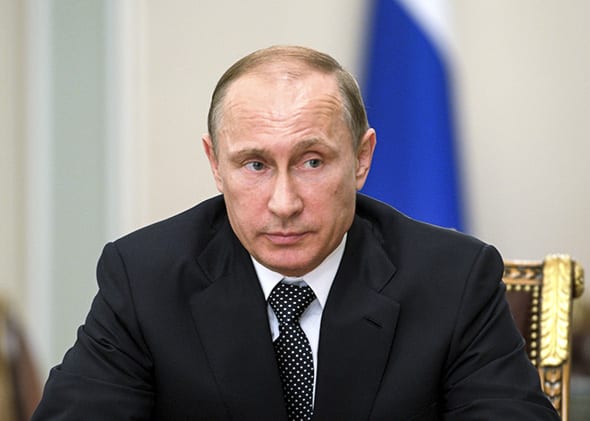 Russia’s President Vladimir Putin chairs a meeting at the Novo-Ogaryovo state residence outside Moscow.  “Do you realize what you’ve done?”

For ’tis the sport to have the engineer

Hoist with his own petard.

At the United Nations General Assembly on Monday’s last, the Russian Federation hoisted the United States on its own petard, blowing up the fourteen-year-old fictitious narrative of the War on Terror by proposing real action. While Obama went to UNGA without a single proposal, Putin proposed a coalition against terrorists, “like the one we had against Hitler”:

We are suggesting to not be guided by ambition, but by mutual values and shared interests. To unite our efforts based on international law to solve the issues we are facing, and to create a truly broad international anti-terrorism coalition.

You have to agree that the reference to Hitler was a rhetorical masterstroke, mocking the American political and media establishments’ frequent slurs of Putin as Hitler. Taking over the terms of a discourse is the first step in exposing its hidden connivance. It’s the petard in action. Polonius-like with doddering ramblings, but rank with clichéd sound-bites and sulking fury, Obama boasted like a cornered school-yard bully, ““I lead the strongest military that the world has ever known, and I will never hesitate to protect my country and our allies, unilaterally and by force where necessary.” Against which boast, with almost biblical thunder, pounced Putin’s accusation, ““Do you realize what you’ve done?”

A stunning question, for, without ever mentioning the US, referring to it instead as the “sole center of dominance” after the end of the Cold War, Putin recalled its attention to the devastating consequences of its foreign policy decisions. “A power vacuum for extremism,” in his words, had opened like a sucking vortex in the Middle East and North Africa, which “led to the creation of zones of anarchy, immediately filled by extremists.” The Islamic State, he said, did not materialize from nothing.

So, then, what now? The Islamic State must be destroyed—in all its permutations. Imagine Washington’s consternation as its pretext for rampaging across the globe was being deftly and swiftly removed from its propaganda control.

“‘The Islamic State must be destroyed—in all its permutations.’ Imagine Washington’s consternation as its pretext for rampaging across the globe was being deftly and swiftly removed from its propaganda control…”

Since Monday, dramatic events unfolded. On his return to Russia on 29 September, Putin gathered the permanent members of the Russian Federation’s advisory council on security to discuss the fight against extremism and terrorism. On Wednesday, upon recommendation of the advisory council, the Russian Parliament (higher chamber) approved the use of Russian armed forces on foreign soil. President Assad formally requested Russian military assistance in fighting ISIS, thus making Russia’s defensive intervention in Syria the only one based on legality—unlike the aerial strikes conducted by the US, joined lately by France, and being considered by Australia and other countries, which violate international law, as noted by Sergei Ivanov, Kremlin spokesman. Foreign Minister Lavrov, on Wednesday, said that 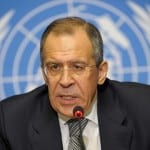 Russia is helping Syria to fight against the Islamic State. We have explained our position, we do not to feel any affection to anyone in the region, but we are firmly convinced that we cannot allow Syria to collapse as a state. We have suggested that the US should harmonize its efforts to be sure that the air strikes on the terrorists’ positions are coordinated with the steps on the ground. I hope that Barack Obama has heard the words of Russian President Vladimir Putin.

Lavrov added that Moscow is preparing a UN resolution proposing a coalition against the Daesh. Will the United States expose its cheating hand by voting against it in the Security Council? We are living in interesting times. Russia is sending to Syria from forty to sixty—Su-24, Su-25, and Su-34—airplanes and two battalions. Russian strikes have already hit near Homs, as reported by CNN. The US has not heeded Russia’s request to keep clear of Syria’s aerial space during these initial operations, thereby increasing the risk of “confliction,” a military term meaning an incident SNAFU of international proportions.

Whatever happens next, the US is on notice to stop playing with fire. Let’s hope, as Otto von Bismarck said, that “there is a Providence that protects idiots, drunkards, and the United States of America,” so that the Americans understand, still in Bismarck’s words, not to “expect that once we have taken advantage of Russia’s weakness, we will profit forever.”

The Teutons, the Mongols, the Turks, the French, and the Nazis all learned that hard lesson. It’s time for the US to take up Russia’s offer to join a coalition alliance to stamp out these proliferating terrorists—implicitly, instead of training and funding them until the whole scam blows up in their faces, as it’s doing in Syria. “The secret of politics is to make a good treaty with Russia,” Bismarck advised. As history shows, it is not wise to play dice with Russia.

ABOUT THE AUTHOR
Senior Contributing Editor Luciana Bohne is co-founder of Film Criticism, a journal of cinema studies, and teaches at Edinboro University in Pennsylvania. She can be reached at: lbohne@edinboro.edu.

The Anti-Russian Lying Machine in Action

Obama Lied When He Said This

If Russia succeeds in eliminating ISIL, it may well be that the axis Egypt/Saudi Arabia will turn to Russia instead of to the far-off USA because bribes to the Egyptian military and the high profits for Saudi-Arabian oil are becoming more and more friable in the constant chaos of US foreign policies. Washington is being caught in its own petard.

it is obvious that Russia has no love for israel who, in tandem with Saudis and America, want Syria to fall so that they can march in, take what is left of Syria and claim a Greater Israel..not content with Palestine which they are about to colonise totally..including the holy place of Al aqsa ..they want more as always. I just hope Russia does something about Israel because the world as had enough