Fascism in the 21st Century: Part I, Briefly, Its 20th Century Background

The Fascist phoenix:  Toward a basic taxonomy
In America even the rise of a new party or formation identifying itself as “fascist” may not be necessary, as the degeneracy of existing parties suffices to fill that function, setting off no alarms. 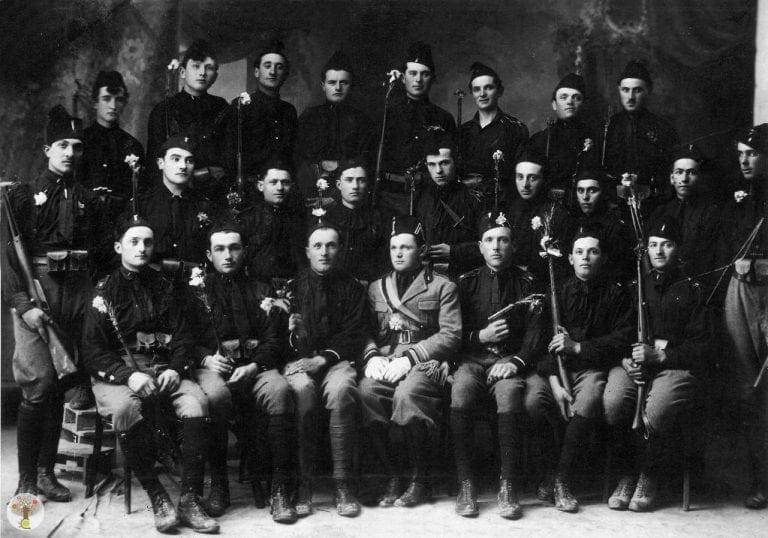 Special to The Greanville Post | Commentary No. 24: “Fascism in the 21st Century: Part I, Briefly, Its 20th Century Background”

Fascism (and Fascist) is a term we hear from all sorts of folk these days, ranging from some of those on the Left over occasionally to some on the Right.  It is usually used as a term of opprobrium (except perhaps for those elements in the coalition of the U.S.-sponsored regime in Ukraine which openly hark back to the Ukrainian military units that fought on the side of the Nazis in World War II, or certain far-right organizations in the United States itself).  The original “fascist” party was founded by then-future Italian dictator Benito Mussolini in 1919.  Mussolini (or his public relations team) took the name from a symbol used in the days of the Roman Empire.  It referred to a bundle of rods tied around an axe, representing civil power and authority.

I should think that few users of the term today are thinking about the Roman origins of the term.  Most would think back to what it meant in the 20th century.  There were three major powers described as “fascist,” sometimes by themselves, often by their opponents.  They were of course the self-described “Axis Powers,” Italy (the first self-described fascist state), Germany, and Japan.  There are also a number of smaller states that were, as we shall see in the definition below, described as fascist.  The most prominent ones were Spain under Franco and Portugal under Salazar.  Further, in the sense that it was the first nation in history to have an autocratic, absolutist government not headed not by a monarch (see below), Hungary under Admiral Miklos Horthy, could be considered to be the first fascist state.  It came into existence in 1920 following a failed communist revolt.  Over time, a number of Latin-American countries could also be considered fascist: Argentina under Peron (although peronismo is a hybrid with a generous amount of genuine leftist populism in the mix); Paraguay under Stroessner, Cuba under Batista, Chile under Pinochet, and Brazil under “the generals” for 20 years from 1964. 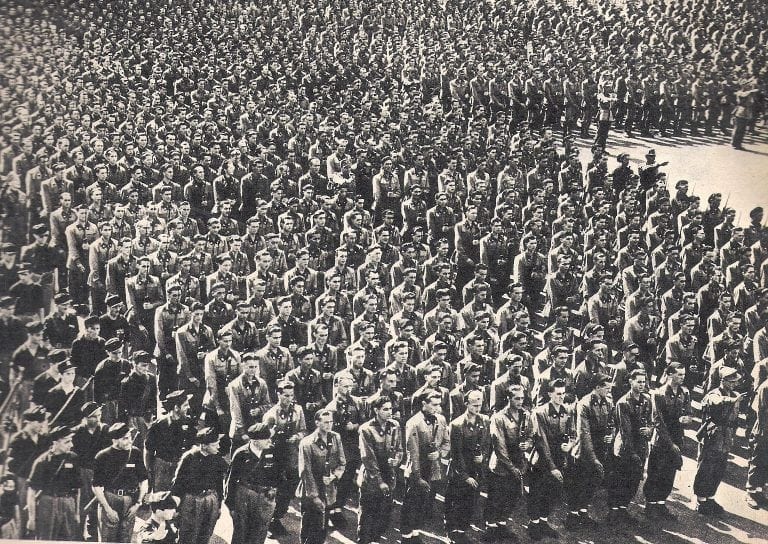 Fascists—especially the German and Italian varieties—were keen on public rallies and marches designed to build morale and intimidate opponents.

Based on the 20th century model, the principal political and economic characteristics of fascism can be briefly described as follows: 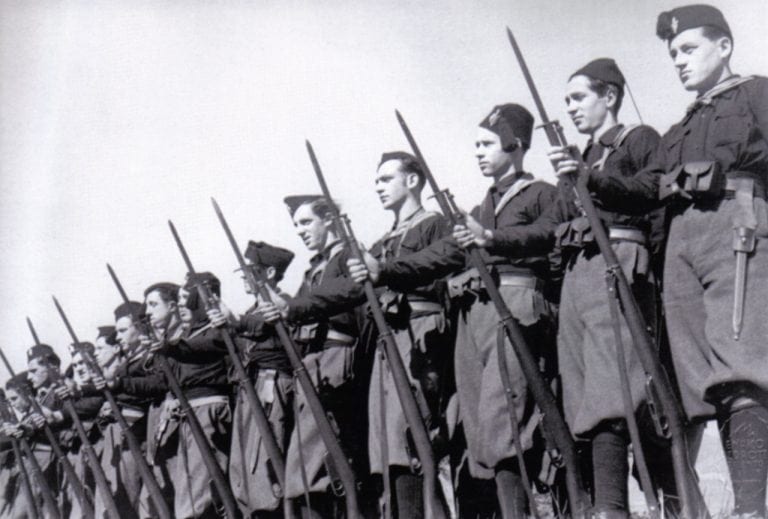 [dropcap]I[/dropcap]n Italy and Germany fascism was also characterized by a single head of government/state who with originally privately-funded armed forces behind him had seized control of the predecessor state apparatus of a parliamentary democracy.  Then, with the support of that same body of armed men, augmented and eventually replaced by the regular armed forces, projected themselves into the position of larger-than-life, all powerful dictators.  Again, at first these “bodies of armed men” were privately funded by elements of their respective ruling classes, the “Brownshirts” (the Sturmabteilung or “SA”) in Germany and the Black Shirts in Italy.  In the other major 20th century fascist state, Japan, while during World War II there was an all-powerful cabinet headed by a Prime Minister, Hideki Tojo, for a wide variety of reasons Tojo never acquired the almost mythical status in his own country that Hitler and Mussolini did in theirs. (The Emperor figure remained far too powerful for that to occur. The spectacle of Tojo strutting around like Hitler or Mussolini would have seemed an insolence to many conservative Japanese, as it would have been an injury to the image of their living divinity, emperor Hiro Hito.) 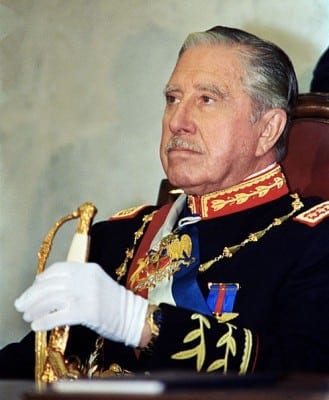 Chile’s dictator Pinochet: During his reign something of a personality cult emerged, which persists to this day among various sectors of the population, including the ruling class, lower middle class, and former members of the state security and military apparatus.

Because of the roles that Hitler and Mussolini played in leading and ruling their respective countries it is often thought that fascism requires such a singular leader and the cult-of-personality that was built around each.  In fact Hitler and Mussolini both adopted the term “leader” to describe themselves, “Fuehrer” in German and “Il Duce” in Italian.  It is important to note that that term has a meaning beyond “President” or “Prime Minister.”  Both dictators developed that meaning to be understood by the people of their nations, supporters and opponents alike, that they were not only in charge of all aspects of the government, but well beyond such ordinary powers.  In fact, every person was to think of them as their personal leader and that as such they were required to follow him wherever he might take the nation.  In Germany this was encapsulated by the fanatical term “Mein Fuhrer” not just “leader,” but “my leader.”

“Because of the singular German Nazi and Italian examples, it is often thought that fascism requires a singular leader who takes on for himself almost mythical powers and…that it can only arrive through violence. Both ideas are actually erroneous. Far more subtle forms of fascism can develop, with almost identical social results.”

In Germany, among other things this led millions of members of the German armed forces to, at Hitler’s orders, fight to the last man in increasingly hopeless situations after the Red Army had turned the tide (and won the war) on the Eastern front.  Perhaps blessed (or accursed, depending on the viewpoint) with less abstract romanticism and fealty to ideologies, the Italians never allowed themselves to go that far for Mussolini.  For example, the Italian Army in North Africa surrendered by the hundreds of thousands before the relatively undermanned and under-equipped British Army, did not fight the Allies much in Sicily, and promptly gave up completely when the Allies landed at Salerno in southern Italy before taking over the major city of Naples without too much of a fight. (More fanatical Fascist formations, akin to the German SS stood their ground with more zeal, but their efforts were pallid by teutonic standards, hence the barely concealed contempt of the Germans for the Italian people, whose nation they occupied with unusual harshness. (The only Italian that Hitler respected was Mussolini).

But, because of the singular German Nazi and Italian examples, it is often thought that a) fascism requires a singular leader who is granted/takes on for himself almost mythical powers and b) because of how fascism came to Germany and Italy (by coup d’état) and Spain (civil war) that it can only arrive through violence. In Germany, technically the Nazi violence did not start until Hitler had gained the Chancellorship (Premier) through Constitutional means.  Indeed he was appointed Chancellor by the nation’s President, the Prussian Army’s Chief of the General Staff during World War I, Paul von Hindenburg.  But Hitler had his forces very well-prepared for what they would do once he gained the position and the Nazi Terror, aimed first at the leading German Communists and Socialists, started on that very night, January 30, 1933.  Mussolini came in with the support of his country’s king, but very much with his Blackshirts behind him from the beginning, and he too began rounding up political enemies immediately upon taking power.

For the United States in the 21st century, as the economy and living standards for the majority of the population decline, as income and wealth inequality increases, and as the ruling class further cements its control of the State through “Citizens United-“facilitated “campaign contributions,” voter suppression, gerrymandering, and outright election theft, the question is whether full-fledged fascism will arise and if so, how it will be imposed and what form it will take.  We shall begin to turn to a consideration of that question in the next column in this series.

Time Is Running Out For Pax Americana’s Apologists

Very good . Its seldom discussed in liberal circles for obvious reasons but communist analysis identifies fascism as a social condition that arises from liberalism. It has been said that fascism is the response of liberalism to stress. But in the “unipolar” world of the 21st century it’s becoming clear that liberalism moves toward fascism anyway. The fall of the Soviet Union and the socialist states of Europe removed (for the first time in history) all of the (external) impediments to the growth of liberalism and the result has been a lurch toward fascism anyway. Marxist theory of capitalism is… Read more »

So, Italy had her “Black Shirts” and Germany had her “Brown Shirts”- And here in America, we have what was once unheard of, and that is A HUGE Privatized force, as in Eric Prices “Black Water or whatever neame they call themselves now, among many other “Private Contractors”- They are alleged to have more soldiers in Iraq than regular U.S Military- Brings to mind the million man army that J.P. Morgan and other Robber Barons had all arranged for General Smedley Butler to overthrow FDR- General Butler foiled their plans though by playing along and then exposing them to Roosevelt-… Read more »

Greenville post needs an “Edit” function for correcting comments- I see two gross spelling errors that I wish I’d of had A shot at….
Please correct Eric Prince’s name for me and also “name”-