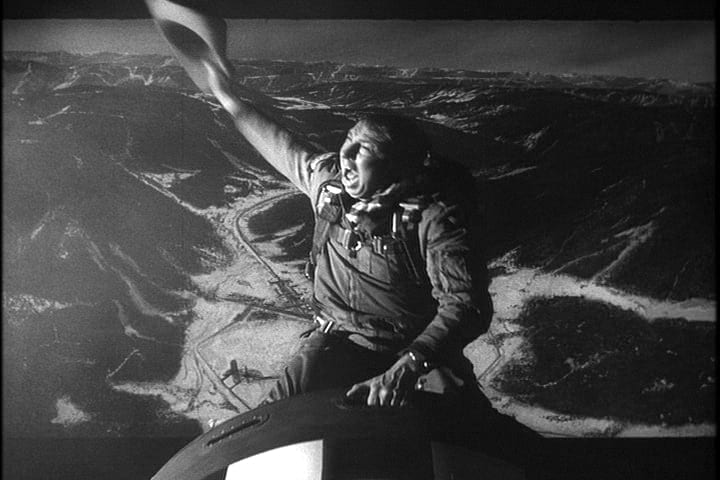 [su_panel color=”#172501″ border=”5px solid #cccccc” shadow=”5px 1px 2px #eeeeee” radius=”2″]“How senseless is everything that can ever be written, done, or thought, when such things are possible. It must be all lies and of no account when the culture of a thousand years could not prevent this stream of blood being poured out, these torture-chambers in their hundreds of thousands. A hospital alone shows what war is.” –Erich Maria Remarque, All Quiet on the Western Front[/su_panel] 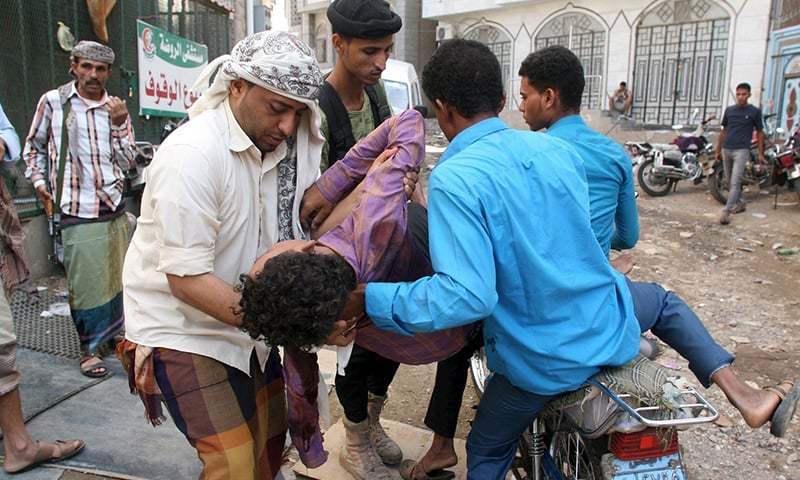 Yemen wedding strike. Any assemblage of people may draw the attention of the American “bug-splatters” or their Saudi allies.

The United States-backed bombing of Yemen by Saudi Arabia and the Gulf Cooperation Council has killed upwards of 6,000 Yeminis and wounded more than 27,000 others since the assault was launched on March 26, 2015.

According to UNICEF, “With no end in sight to the deadly conflict in Yemen, nearly 10 million children inside the country are now facing a new year of pain and suffering:”

“The direct impact of the conflict on children is hard to measure. The statistics confirmed by the UN (747 children killed and another 1,108 injured since March last year; 724 children pressed into some form of military activity) tell only part of the story. But they are shocking enough in themselves.”

The Obama administration has declared the theocratic monarchy to be a “key ally” in the Gulf, authorizing the sale of four “advanced” Lockheed Martin warships to Saudi Arabia to the tune of $11.25 billion to help the Saudis conduct a bloody campaign against Houthi rebels, a group that has been accused by the Saudi government of supporting Iran by proxy.

For their own efforts, Saudi Arabia has set aside $57 billion in a war chest to fund criminal military offenses against the people of Yemen. As the United Nations reported in September 2015, it is the civilian population that “is bearing the brunt of the conflict.”

Yemen was already an exploited nation before public buildings and homes were destroyed. UN Under-Secretary-General for Humanitarian Affairs Stephen O’Brien said in September 2015 that “a shocking four out of five Yemenis require humanitarian assistance and nearly 1.5 million people are internally displaced.” Thousands of survivors have been denied basic means of survival such as food, water and medical supplies.

On Dec. 29, 2015, the Office of the UN High Commissioner for Human Rights in Yemen discovered the remains of 29 cluster bombs during a field visit in the Haradh district. They were identified as BLU-63 antipersonnel/anti-materiel submunitions and components of a CBU-58 cluster bomb, the kind of munitions the US exported to Saudi Arabia between 1970 and 1995.

United Nations Secretary-General Ban Ki-moon said the reports were “troubling” and deemed that the use of cluster munitions in populated areas “may amount to a war crime due to their indiscriminate nature.” 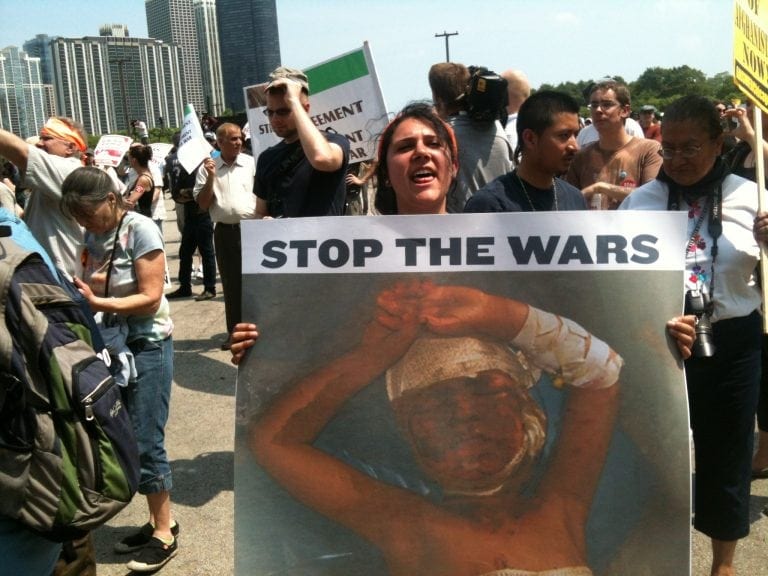 CC BY by World Can’t Wait

Ban added he was “deeply concerned about the intensification of coalition airstrikes and ground fighting and shelling in Yemen, despite repeated calls for a renewed cessation of hostilities.”

The non-profit Cluster Munition Coalition (CMC), an organization dedicated to eradicating cluster munitions and prevent further casualties and “the suffering they cause,” describes the particular dangers of such weaponry:

“Cluster munitions are dropped from aircraft or fired from the ground or sea, opening up in mid-air to release tens or hundreds of submunitions, which can saturate an area up to the size of several football fields. Anybody within the strike area of the cluster munition, be they military or civilian, is very likely to be killed or seriously injured.”

“As usual, siding with the oppressors and victimizers, the Obama administration has declared the theocratic monarchy to be a “key ally” in the Gulf, authorizing the sale of four “advanced” Lockheed Martin warships to Saudi Arabia to the tune of $11.25 billion to help the Saudis conduct a bloody campaign against Yemeni rebels…”

The Convention on Cluster Munitions bans the use of “cluster munitions that cause unacceptable harm to civilians.” It was adopted in Dublin, Ireland on May 2008 and was ratified in August 2010. Five years later, 118 nations had signed the treaty and 98 have acceded to it or ratified it.

The US and Saudi Arabia, it should be noted, are not signatories of the Treaty. However, the Hague Conventions of (1899, 1907), the Geneva Conventions (1925, 1949) and the Nuremberg Charter (1945) prohibit the “use of weapons or tactics which cause unnecessary or aggravated devastation or suffering.”

The US and Saudi Kingdom display their hypocrisy on the issue of human rights with the airstrikes on civilian hospitals in the US’s war in Afghanistan and the Saudi-bombing of two hospitals within months of each other.

On October 27, 2015, Saudi Arabia bombed a hospital operated by the international medical organization Medecins Sans Fronteiers (Doctors Without Borders) 24 days after the US attacked the MSF hospital in Kunduz, Afghanistan. “The small hospital, in the Haydan District in Saada Province, was hit by several airstrikes,” MSF announced in a news release.

“Hospital staff and two patients managed to escape before subsequent airstrikes occurred over a two-hour period. One staff member was slightly injured while escaping. With the hospital destroyed, at least 200,000 people now have no access to lifesaving medical care.”

Contrary to the old expression, lightning managed to strike twice on Jan. 10 when a Saudi projectile bombed the MSF-supported Shiara Hospital in the Razeh district, killing at least four people and injuring 10 others. Civilians in the district have suffered 10 months of constant bombing, according to the MSF.

There have been calls from human rights groups around the world to hold the guilty accountable, with demands ranging from unseating them from the UN Human Rights Council to demanding the US break its financial and military ties from the Saudi Kingdom.

CMC Director Megan Burke issued a public statement calling for “All members of the Saudi-led coalition should cease all use of cluster munitions and should be held accountable for war crimes associated with their use.”

Other groups have joined Burke’s call for justice, including International Action Center, Human Rights Watch and Amnesty International. (We should note that the crimes for which the Saudis are being called to account must be extra serious to have even these “human rights” organizations, all three frequently utilized by the empire to act as propaganda shills in Washington’s defamation campaigns, to make any kind of stink about the issues. It’s probably that or lose more of their credibility. Of course, that is our supposition, as imperial shills normally do not reveal what they discuss behind closed doors.—Eds] 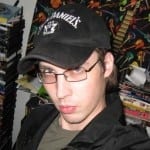 MIKE KUHLENBECK, currently serving as a special roving correspondent for The Greanville Post, is a journalist, photographer, researcher and media critic based in Des Moines, Iowa. He is a member of the Society of Professional Journalists, Investigative Reporters and Editors and the National Writers Union UAW Local 1981/AFL-CIO.

Kuhlenbeck works as a reporter for Iowa Free Press and as a freelance journalist. Besides The Greanville Post, his work has appeared in publications such as The Des Moines Register, The Humanist, Z Magazine, Foreign Policy Journal, Eurasia Review, People's World, The Palestine Chronicle, Paste, Little Village, Industrial Worker, Earth First! Journal, Intrepid Report and the National Writers Union newsletter.

GMO mosquitoes could be cause of Zika outbreak, critics say