Home AMERICAN DUPLICITY The Unmasking of the Ukrainian Color Revolution

The Unmasking of the Ukrainian Color Revolution 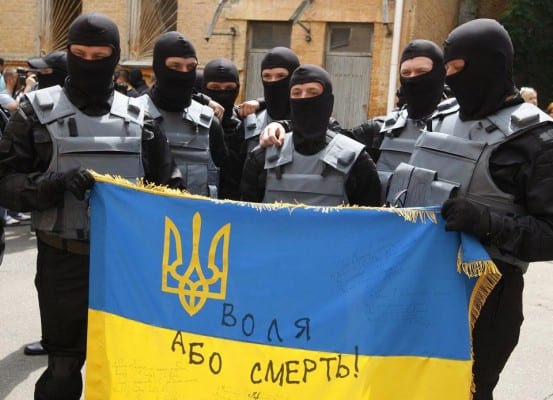 It is not news to regular readers of The Greanville Post that the U.S. was behind the Ukrainian color revolution. Nor is it news that the far right has stepped forward as an integrated arm of the new government of Ukraine. However, a documentary by Paul Moreira is making waves across Europe – “Ukraine, les masques de la révolution” [Ukraine: Masks of the Revolution], that was released the beginning of February (2016).

What is new about this documentary is its addressing the various lies of both the “revolution,” and what has become the daily reality since then. In particular the roving bands of far right “volunteers” who seem able to act with impunity in enforcing their ideas of “purity.” They are vehemently anti-Russian, and enact that it what would be considered hate crimes virtually anywhere else in Europe. Moreira focuses his investigation around the role of the Right Sector, Azoz Brigade, and Svoboda Party in the original demonstrations which were presented as “brave” protestors in the “west” and were heavily supported by the United States. Moreira particularly started questioning the silence and seeming acceptance of the deaths / murders at the Trades Union House in Odessa that were caused by the militias.

I encourage you to take the time to watch the documentary. The version included here has English sub-titles.

As this video has been mysteriously “disappeared” from various source locations, for double safety we present here both an English version, with subtitles (above), and the original French version. Apparently the French audience could not be muzzled, or is of lesser importance to the misinformers, because no attempts at blocking the French version seem to have been made.  We therefore imagine the invisible censors’ main concern is to keep the American mind in thrall to their lies. So dust off those French dictionaries, just in case! 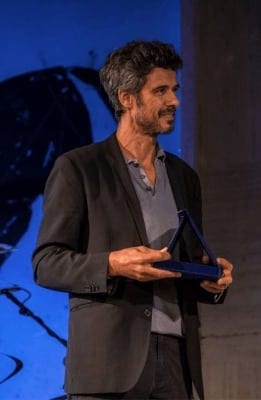 As you can imagine, Moreira has come under attack for creating the documentary, and Canal Plus for showing it (and refusing to pull it). His response to those critics was published at New Cold War: Ukraine and Beyond that I have extracted in part below:

When I started this investigation on Ukraine, I was astonished to discover the degree to which the massacre in Odessa [May 2, 2014] had faded from memory. Forty five people were killed in a huge fire in the heart of a major European city in the middle of the 21st century. Everything was filmed by dozens of cameras and cell phones. Yet around me, no one remembered.

Forty five Ukrainians of Russian origin died in a fire inside a building [the Trades Union House in the city center of Odessa] caused by the Molotov cocktails of Ukrainian nationalist militias. After a quick investigation, I discovered that the event had not been censored. It had been addressed, discussed, but never investigated. As though too embarrassing to discuss.

Why no investigation? Probably because the victims were of Russian origin. These victims were reported as “persons” but without knowing who they were, who killed them and why they were dead. “Persons” who were nobodies.

During my investigation into this massacre of little exposure, I saw the importance of Ukrainian nationalist militias. They were at the forefront of street fighting on Maidan Square (January-February 2014], and later formed battalions to fight Russian troops in the east of the country. But these battalions were merged into the army. They did not exercise the same discipline. They were able to serve as auxiliaries to the government; or become a parallel police. And, yes, in their ranks, the signs of neo-Nazi ideology were obvious.

To question the rigor of my documentary, Benoit Vitkine cites one, sole example. He accuses me of having created out of my imagination the manufacture of a new generation of tanks by the nationalist battalion Azov (for which he seems to feel a fond indulgence). But it’s the truth. Andriy Biletsky, the head of the battalion, sang to me its praises [manufactured tank] with much pride. 1.2 meters of armored shield in the front and steering video cameras used to steer it. The technical details of this new beast of war can be found here.

Benoit Vitkine is well aware that Andriy Biletsky comes from the most radical extreme right. His electoral standing is low (although he is a Rada deputy), but his standing in steel and in battle-hardened men is strong.

All this said, if one sits at the level global public perception, it is clear that the general public knows nothing about the importance of Ukrainian neo-Nazi groups, nor the existence of the massacre of Odessa of May 2, 2014. That`s because this issue has been underreported (which is not to say not reported at all). We know from the Russian side, it is said that far-right nationalists went to fight in the Donbass. But we know less on the other side.

What the documentary makes perfectly clear is that without the participation of the far right paramilitaries there would not have been a “revolution.” And here in lies the cautionary tale as we look at US involvement around the world, but perhaps most particularly with the marching policy of “regime change.” Most recently, the public eye has been on Syria – even if the “coverage” that is pasting the air waves is skewed beyond belief.

It is certainly long overdue for the American public to demand answers of the leadership on exactly why we continue, nation after nation, to ferret out fanatics and extremists to be the fist inside the US policy glove. We might even pose that question to the current crop of presidential candidates, all of whom seem to have agreed to continue the lie of our true role in Syria (for example).

Rowan Wolf is Managing Editor of The Greanville post and Director of The Russian Desk. She has a doctorate in sociology and taught it for 22 years. Her specialized areas of interest and research are systems of inequality and the systematic distribution of power; corporatization (aka globalization); organizations; environment, culture and socialization.

US fires ICBMs amid war threats against Russia