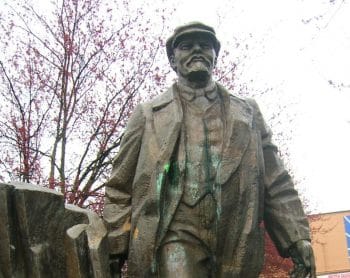 [dropcap]I[/dropcap]n Lenin’s “Left-wing Communism: An Infantile Disorder”, written in 1920 as a polemic against Dutch and British groups in the new Third International meeting that year in its Second Congress in which strategy and tactics were debated. His target was the West European ultra-left communists who had come out against Marxists working in trade unions or running for public office and sitting in bourgeois parliaments

In his polemic against them Lenin says “it is sad to see people who doubtless consider themselves Marxists forgetting the fundamental truths of Marxism.” As Lenin often did, to make his point he cited the brilliant Engels’ article  on the Blanquist Communards who aimed at achieving their aims without any intermediate stations, i.e. without any compromises, which they saw as mere obstacles postponing victory and prolonging the period of slavery to the capitalist class.

Lenin pointed out that the successes of the body of German communists were due to their acceptance of the compromises dictated by historical development while they “constantly pursue the final aim, the abolition of classes and the creation of a society in which there will no longer be private ownership of land or the means of production.” He criticized the Blanquards for wanting to skip intermediate phases and compromises.

“What childish innocence it is to present impatience as a theoretically convincing argument!”

Lenin notes that to young and inexperienced revolutionaries as well as petty-bourgeois revolutionaries it seemed incorrect to “allow compromises”; then he cites British opportunists who reason that “if the Bolsheviks may make a certain compromise, why may we not make any kind of compromises.” From those two positions he shows that there are compromises and there are compromises. “Every proletarian has been through strikes and has experienced compromises when workers had to go back to work either without having achieved anything or agreeing to only partial satisfaction of their demands. The proletarian notices the difference between a compromise enforced by objective conditions such as lack of strike funds and no outside support, extreme hunger and exhaustion which in no way reduces his revolutionary devotion and readiness to continue the struggle and a compromise by traitors like strikebreakers who because of cowardice toady to the capitalists and yield to intimidation, persuasion or flattery.”

Editor's Note: The issue of compromise and political expediency
In these days of critical issues and spinning disasters, it is not unusual to find competing groups and interests apparently sharing the same concerns or desired outcomes. There are "marriages of convenience" where the old "Enemy of my enemy is my friend" seems to be the preferred strategy. I believe that Lenin's discussion here cautions against this type of compromise. Certainly there are those situations where different groups come together (and indeed must come together) to address a common problem, and compromises often come into play. In such situations it is critical to remember what is not negotiable: basic needs and deeply held principles. All too often this is forgotten and the inevitable ensuing power struggle ultimately determines the shape, context, and implementation of the "compromise," which makes it no compromise at all. Compromises can be slippery slopes, for each compromise becomes the starting point for future negotiations and compromises. While I am not arguing that we need to be dogged ideologues, I am arguing that close held principles and visions should not be on the compromise chopping block - not for any party to the negotiations.

In politics however it is a more decision than is differentiating between legitimate compromise in a strike and the traitorous strikebreaker. That, Lenin repeats as he so often does, is the task of party organization and party leaders who through long experience acquire the knowledge and also instinct to resolve political problems, like identifying the mutable dividing line between what is legitimate compromise and what is opportunism. A long process of education, training, enlightenment and everyday experience is required to single out in each separate historical moment the impermissible and opportunistic compromises.

Here, Lenin dwells on the impermissible compromise of opportunism in “defense of the fatherland” when in WWI German socialists backed the predatory interests of its own bourgeoisie in the war, the defense of the bourgeois’s own country also against the revolutionary proletariat and the Soviet movement in Russia.  That is, proletarian against proletarian, worker against worker. Lenin saw the defense of bourgeois democracy and parliamentarianism as the chief manifestation of impermissible compromises that he said the “sum total of which constituted the opportunism that is fatal to the revolutionary proletariat and its cause.”

Lenin then condemned certain German Lefts’ rejection of all compromises with other parties. Such views actually condemn the whole of Bolshevism, he points out, which in order to gain power, maneuvered, temporized and compromised with other parties, bourgeois parties included. “To refuse to maneuver, to utilize the conflict of interests among one’s enemies… is this not ridiculous in the extreme?”

After a Socialist revolution of the proletariat in one country, the proletariat of that country is still weaker than the bourgeoisie because of the latter’s international connections and the continuous restoration of capitalism by small commodity producers of the country that has overthrown the bourgeoisie. Compromises with mass allies are necessary.

“Capitalism would not be capitalism if the proletariat were not divided into more developed and less developed strata …, by territorial origin, trade, … religion, and so on. From this follows the absolute necessity for the vanguard of the proletariat, for its class-conscious section, for the Communist Party, to resort to maneuvers, arrangement and compromises with the various groups of proletarians, with the various parties of proletarians … and workers and small masters.

“The whole point,” Lenin concludes, “lies in knowing how to apply these tactics in order to raise the general level of proletarian class consciousness, revolutionary spirit, and ability to fight and win…”

The Logic of Murder in Israel: A Culture of Impunity in Full View of the Entire World.

RUSSIA IS WINNING THE ECONOMIC WAR