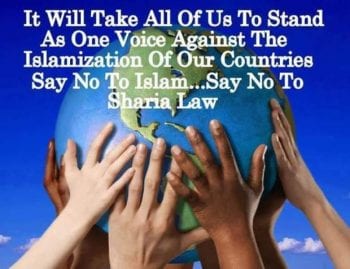 Welcome to Islamophobia – afraid that Muslims will conquer the world.

Is fear, hate, and outbursts of violence what makes ‘America’ great? It seems that way if you look back at the history of the United States and the present with our walls, and bombs, and an arsenal for each person to carry around in case someone starts shooting then everyone can start firing and let the bullets find what target they may. This current campaign of fear and hate is not organic. It is manufactured – both in the US and around the world – and funded. In whose interests is all of this hatred and the associated politics of fear ginned up? Take a few minutes to look at these sources:

It is important to realize that this is a heavily funded campaign and that like other political contributions in the US, there is essentially no limit on how much people and organizations can spend to shape the minds of the people, nor the policies and leadership of the country.

This is not just happening in the US, and these same forces are playing their part in the BREXIT initiative in Britain (and right wing forces elsewhere). Further, it is important to realize that the people spouting all this are not just ignorant kooks, but mostly people being very carefully lead down the garden path. – rw

A new report published Monday has revealed that 33 Islamophobic groups in the U.S. had access to over US$205 million between 2008 and 2013.

According to the report “Confronting Fear,” by the Council on American-Islamic Relations, or CAIR, and the Center for Race and Gender at UC Berkeley, this money was used “to spread fear and hatred of Muslims.”

The study analyzed publicly listed tax filings to calculate that Islamophobic groups earned at least US$205,838,077 in revenue.

The staggering figure is indicative of a broader trend of increased hostility toward Islam and Muslims, the report states.

Not only are there more Islamophobic groups in the U.S.,up from 69 in 2013 to 74 in 2016, according to the report, instance of violent attacks are also on the rise.

In 2015, more attacks on mosques were reported than any other year since 2009. A total of 78 mosques were attacked—triple the number of the past two years.

Last year, also saw the highest number of cases of vandalism, destruction of property and intimidation against Muslim people.

Also raising concern, the report indicates, is the influence of anti-Islamic groups on government legislation.

According to the report, anti-Islam bills became laws in 10 U.S. states, including Florida and Tennessee where lawmakers “have passed laws revising the way they approve textbooks for classroom use as a direct result of anti-Islam campaigns.”

The rise of Islamophobia is partially attributed to the anti-Muslim political rhetoric espoused by figures like Republican presidential candidate Donald Trump.

“The 2016 presidential election has mainstreamed Islamophobia and resulted in a number of un-constitutional proposals targeting Muslims,” said Corey Saylor, director of CAIR’s Department to Monitor and Combat Islamophobia.

During the presidential contest, Trump demanded a “total shutdown of Muslims entering the United States” and for mosques across the U.S. to be closed.

In May, a study from Georgetown University found that from March 2015, when Texas Senator Ted Cruz announced he would for the Republican Party nomination, to March 2016, authorities registered 180 incidences of violence toward Muslims, including “12 murders; 34 physical assaults; 49 verbal assaults or threats against persons and institutions.”

Islamophobic organizations in the United States. See the list at CAIR.

Crimeans Recount Their Experiences When The West Took Ukraine

Donald Trump: Turning the Corner Towards Fascism (But First Let’s Define It)

Why aren’t groups like these that spread ORGANIZED AND WELL FUNDED hate, fear and violence against another segment of Americans shut down? Is it because they themselves OWN the U.S. government lock, stock and barrel: “You know very well, and the stupid Americans know equally well, that we control their government, irrespective of who sits in the White House. You see, I know it and you know it that no American president can be in a position to challenge us even if we do the unthinkable. What can they [Americans] do to us? We control congress, we control the media,… Read more »