Home ACTIVISTS & HEROES Colin Kaepernick, the National Anthem, the Meaning of ‘Freedom,’ and the U.S. Right

Colin Kaepernick, the National Anthem, the Meaning of ‘Freedom,’ and the U.S. Right

Special to The Greanville Post | Commentary No. 55: “Colin Kaepernick, the National Anthem, the Meaning of ‘Freedom,’ and the U.S. Right” 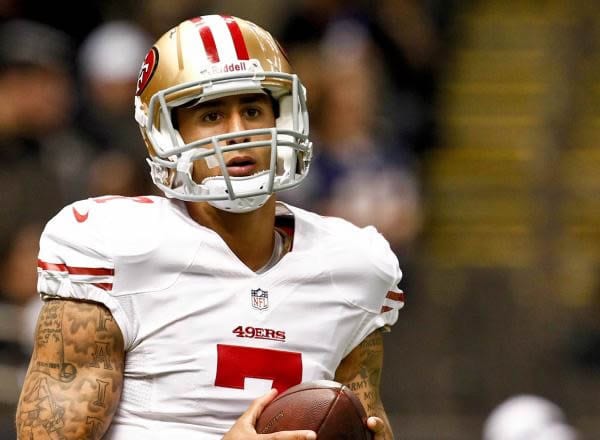 [su_panel background=”#e6f1f6″ color=”#1d1919″ border=”2px solid #150000″ shadow=”7px 0px 1px #eeeeee” radius=”2″]Colin Kaepernick is a quarterback for the San Francisco 49ers in the National Football League.  A former star, he led his team to the championship game, the Super Bowl, for two consecutive seasons, those of 2012 and 2013.  The team lost both games, but it did get there.  Since then his own star has been in the decline, in part due to injury.  The pre-season speculation has been the he will not be the team’s starting quarterback this year.  He is still getting paid well, having signed a lucrative contract after his second consecutive Super Bowl season.[/su_panel]

But right now, the talk about Kaepernick does not concern football.  One has to say that there is likely more talk now about Kaepernick, the political figure, than there ever has been about him as a football player.  That’s because it involves people who are only vaguely aware of what the Super Bowl actually is, as well as die-hard football fans.  Of course that is all due to the National Anthem controversy that Kaepernick caused last week.  It happens that, for reasons which are not entirely understood, the “Star-Spangled Banner” is played, often sung by a soloist or chorus, and sometimes by the whole attending crowd as well, before virtually every sporting event held in the United States.  (In fact, and I never thought about why this is so, it has been played before virtually every amateur race that I do as a tri- and duathlete for the last 34 years, usually involving only a few hundred competitors and spectators.)

One is expected to stand during the playing of the Anthem and face the U.S. flag if one is flying.  In some circumstances, one is also expected to place one’s hand over one’s heart.  (The U.S. Olympic gold medal gymnast Gabby Douglas [like Kaepernick, an African-American —  that couldn’t have anything to do with the controversies, could it?] took a huge amount of heat for [unintentionally] not placing her hand over her heart during one of the playings of the U.S. national anthem at an award ceremony during the recent Olympics in Rio de Janeiro.)  But Colin Kaepernick has now made a national issue, not just of hand-over-heart-placing, but over whether every professional athlete should stand during it.

According to his Wikipedia entry:

“During a post-game interview he was asked why he sat down and stated, ‘I am not going to stand up to show pride in a flag for a country that oppresses black people and people of color. To me, this is bigger than football and it would be selfish on my part to look the other way. There are bodies in the street and people getting paid leave and getting away with murder.’ The 49ers also released a statement which said, ‘The national anthem is and always will be a special part of the pre-game ceremony. It is an opportunity to honor our country and reflect on the great liberties we are afforded as its citizens. In respecting such American principles as freedom of religion and freedom of expression, we recognize the right of an individual to choose and participate, or not, in our celebration of the national anthem.’ “

“I am not going to stand up to show pride in a flag for a country that oppresses black people and people of color. To me, this is bigger than football and it would be selfish on my part to look the other way…”

The uproar has been tremendous.  A retired NFK quarterback, “Boomer” Esiason, (like Kaepernick a two-time Super Bowl loser), now a sportscaster on both radio and TV, ripped him up and down for daring to introduce politics into football.  (Kaepernick did get a good deal of support from other [African-American, of course] football players.)  But of course, it’s not the politics itself that Boomer was objecting to, but rather the particular politics that Kaepernick was expressing (see the above the quote).  And aye, there’s the rub.

[dropcap]I[/dropcap]t happens that that U.S. national anthem has a rather nasty history (and I did not know this until I read the hyperlinked article).  I have always thought that the worst thing about “The Star Spangled Banner” was, having been written by Francis Scott Key to the tune of an English drinking song, because of the range that that tune covers, it is actually very difficult to sing.  But no, that’s not it.  In a comprehensive history of the origin of the song, Jason Johnson tells us that Key was a racist who was very upset about the use by the British in the War of 1812 of runaway slaves, as what the British called Colonial Marines.  And the third verse of the Anthem, which I don’t think is ever performed these days (wonder why?), referring to a battalion of Colonial Marines that had recently defeated a unit led by Key, tells us the following:

“And where is that band who so vauntingly swore,

That the havoc of war and the battle’s confusion

A home and a Country should leave us no more?

No refuge could save the hireling and slave

From the terror of flight or the gloom of the grave,

And the star-spangled banner in triumph doth wave

O’er the land of the free and the home of the brave.”

Obviously the “free” to which Key was referring does not include slaves.

But the criticism of Kaepernick from the Right is resounding, and it’s all about “freedom.”  On the surface.  But it’s an odd kind of freedom, especially if you are an African-American, and for some even more especially if you are African-American who was adopted and raised by a white couple (hence his German-sounding last name).  According to “Fox and Friends” co-host, Brian Kilmeade, Kaepernick should have stood for the Anthem, especially because both his parents are white.  (Oh boy, Brian.  You just took your racist clothes off in public, or perhaps you symbolically put on the hood.)  And especially because the Anthem is all about “freedom,” and the “American way,” donchaknow.  And it has also become attached to the military and “those who serve” (some of whom have actually come to Kaepernick’s defense).

But for the Right in this country, “freedom” has a set of very special meanings and not-meanings.  First and foremost in this case, their definition of the “freedom” that is supposedly represented by the “Star Spangled Banner” does not include the right to not engage in the symbolism it represents when you feel that there are some major wrongs in this country that need to be righted before the National Anthem truly represents everyone.  “Freedom” for the Right means the “freedom” to carry even military weapons in public, but not the freedom to be free of the threat of being attacked by any such carrier on their whim (as at the Sandy Hook school in Connecticut).  Freedom for the Right does not mean, according to Fox”News’ ” favorite African-American sheriff (where does the ruling class find these people?), the freedom to form a potentially revolutionary organization like Black Lives Matter.  Freedom for the Right does not mean the freedom to have the untrammeled right to vote.

And finally, “freedom” takes on a particularly different meaning for the Religious Right and their allies in and out of government in the National Religious — Republican — Party.  It does not mean the freedom to have ready access to perfectly legal forms of abortion or even birth control measures.  It does not mean the freedom to marry who you want to, under the civil law in every one of the 50 states, if that person is of the same sex as you are.   It does mean the freedom to discriminate against those who you disapprove of for one reason or another (let’s say, sexual orientation, sexual identity, religion [see Muslim]).  The latter is perhaps the most dangerous in the long run because that form of “freedom” lines up government on the side of one particular religious belief, against all others, there being, for example, plenty of homosexuals and trans-gender people who are themselves religious.   The religious wars of 16th and 17th century Europe, here we come, under that concept of freedom.

After this column was originally written, before a 49ers game at San Diego on Sept. 1 before which Colin Kapernick “took a knee” during the playing of the National Anthem, on the San Diego Chargers’ annual Salute to the Military night, which makes his action even more significant, he gave an interview in which he said, in part:

“People of color have been targeted by police.  So that’s a large part of it and they’re government officials.  They are put in place by the government.  So that’s something this country has to change. . . . “

Says it all, doesn’t it?