Home AMERICAN DUPLICITY Obama and the US secret war in Laos

Obama and the US secret war in Laos

Obama will attend the East Asian Summit where rising tensions with China over the South China Sea are set to dominate following a ruling by the Permanent Court of Arbitration in favour of a US-backed Philippine challenge to China’s territorial claims. 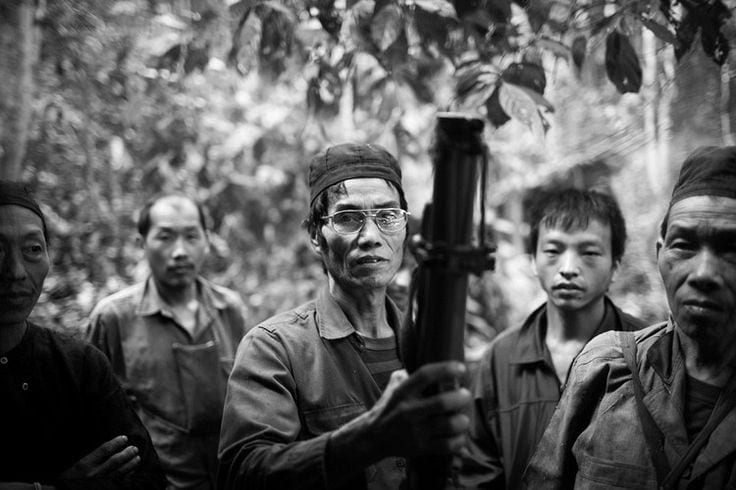 Laotian Hmong secret war soldiers: recruited by the CIA, as usual, to die for the American empire. How many heinous crimes does this abominable agency have on its record? More than 30,000 died fighting for Uncle Sam. Can there be a more stupid way to die?

In a pre-recorded CNN interview aired on Sunday, Obama signalled his intent to deliver a blunt message to Chinese President Xi Jinping to abide by the court’s decision. “When we see them violating international rules and norms, as we have seen in some cases in the South China Sea, or in some of their behaviour when it comes to economic policy, we’ve been very firm,” he said, warning: “We’ve indicated to them that there will be consequences.” 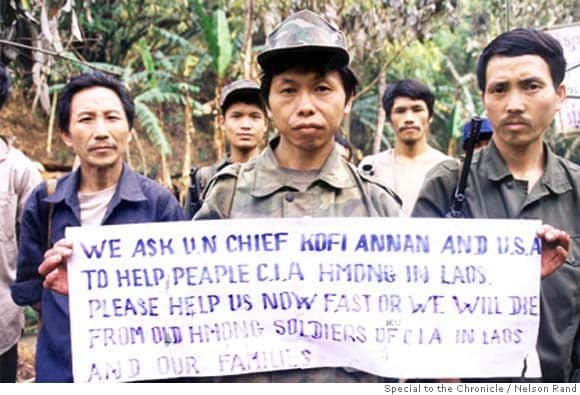 HISTORIC PHOTO: Former soldiers of a CIA-backed ‘secret’ army that fought communist forces in Laos during the Vietnam War hold up a sign pleading for US and UN help. The soldiers never surrendered in 1975 and fought a low-level insurgency for more than 29 years. Picture taken at the group’s headquarters in Xaysomboune Special Zone, northern Laos, in April 2004. (Nelson Rand) 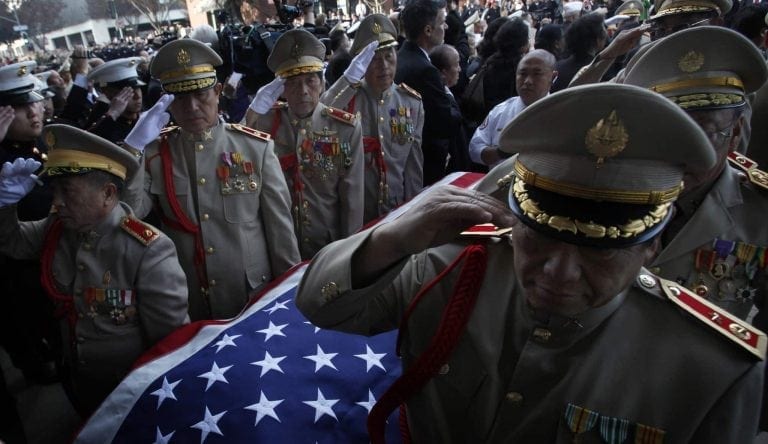 Hmong veterans in the USA. Only a small portion made it to America. The rest had to face the music with those who fought against US imperialism in Indochina.

What utter hypocrisy! As with every other international rule and norm, the US insists that others abide by rulings under the UN Convention on the Law of the Sea (UNCLOS) which it has not even ratified. Over the course of his two terms in office, Obama has transformed the long-running regional disputes in the South China Sea into a dangerous international flashpoint that threatens to trigger war.

Obama routinely declares that China must abide by the “international rules-based order”—that is, the post-World War II order that enshrined American global hegemony and empowered Washington to write the rules for others. He also boasts that it was US military might in the Asia Pacific that ensured “peace” and underwrote the region’s massive economic expansion over the past 40 years.

American dominance in Asia, however, was only established through a series of criminal neo-colonial wars—in particular in Korea and Indochina—that cost the lives of millions, as well as countless diplomatic intrigues and CIA-backed coups. The bloodiest coup, in Indonesia in 1965-66, involved the slaughter of at least a half million workers, peasants and members of the Communist Party of Indonesia (PKI).

As with every other international rule and norm, the US insists that others abide by rulings under the UN Convention on the Law of the Sea (UNCLOS) which it has not even ratified. Over the course of his two terms in office, Obama has transformed the long-running regional disputes in the South China Sea into a dangerous international flashpoint that threatens to trigger war.

The CIA’s secret war in Laos ranks among American imperialism’s worst war crimes. Between 1964 and 1973, the US conducted 580,000 missions and dropped more than two million bombs on a country less than the size of New Zealand. That is equivalent to one planeload of bombs every eight minutes, 24 hours a day, or roughly one tonne of explosives for every man, woman and child in Laos at the time. Laos remains the most heavily bombed country per capita in history.

The US took over from the French in attempting to suppress the anti-colonial movement throughout Indochina—Vietnam and Cambodia as well as Laos—that was dominated by Stalinist parties and backed by the Soviet Union and China. The CIA used every dirty trick in the book to prop up the Royal Lao Government and disrupt North Vietnamese soldiers and supplies from passing down the so-called Ho Chi Minh trail in Laos and Cambodia into South Vietnam.

The CIA was centrally involved, as the war did not have congressional approval and was kept under a cloak of secrecy by the American political and media establishment. As the Royal Laotian army crumbled, CIA operatives recruited, armed and trained an anti-communist guerrilla force estimated at 30,000 from among hill tribes, largely the Hmong. These were bolstered by a secret army of mercenaries from Thailand and US-trained soldiers from South Vietnam, Taiwan, South Korea and the Philippines.

Some 350,000 men, women and children were killed in the carnage, and a tenth of the country’s population was displaced by the fighting. The CIA’s Hmong allies lost so many fighters that they turned to the forcible recruitment of child soldiers as young as eight. To fund the war, the Hmong, assisted by the CIA, grew and sold opium, helping to fuel a global heroin epidemic. The CIA company, Air America, flew the drugs out of land-locked Laos.

The secret war devastated the country. According to one account, “Village after village was levelled, countless people burned alive by high explosives, or by napalm and white phosphorus, or riddled by anti-personnel bomb pellets.” Vast quantities of unexploded ordnance cover nearly a third of the country and have killed or maimed at least 20,000 people since the end of the war. More than 12,000 survivors are in need of ongoing medical care and rehabilitation.

A pittance in US aid—just $118 million—has been provided to deal with unexploded bombs. An estimated 1 percent of contaminated land has been cleared. The Obama administration has increased the amount from $5 million in 2010 to $19.5 million this year, not out of any concern for the Laotian people, but rather as part of its efforts to bully and bribe the Vientiane regime to loosen its ties with Beijing and reorient towards Washington.

The collapse of the Soviet Union and the end of the Cold War has not led to peace but to an escalating succession of wars over the past 25 years, as American capitalism has sought to offset its decline through military might. As was the case in Laos and more broadly Indochina and Korea, whole countries—Afghanistan, Iraq, Syria and Libya—have been devastated in an effort to shore up American global hegemony.

As the global economic breakdown worsens, the United States is actively and aggressively preparing for war against major powers—above all, China and Russia. Washington’s diplomatic efforts in Vientiane are part of Obama’s far broader “pivot to Asia” over the past five years aimed at undermining, weakening and militarily encircling China. As a result, the South China Sea is just one of the flashpoints in Asia that Obama has deliberately inflamed and that could set off a conflict between the two nuclear-armed powers.

Only the working class can halt the slide into another catastrophic world war. This underscores the necessity of the political fight being waged by an international anti-war movement uniting workers in the US, China, throughout Asia and the world to put an end to capitalism and to reconstruct society on socialist foundations.

NOTE: ALL IMAGE CAPTIONS, PULL QUOTES AND COMMENTARY BY THE EDITORS, NOT THE AUTHORS
PLEASE COMMENT AND DEBATE DIRECTLY ON OUR FACEBOOK GROUP INSTALLATION
ABOUT THE AUTHOR
Peter Symonds is a senior editorial and political analyst with wows.org.

Syria: Raped by US Imperialism