Since his inauguration, Donald Trump has sent American troops into a number of military adventures and his administration is looking to promote even greater military interventionism around the world.

WASHINGTON — For some, Donald Trump’s campaign trail claim that he had always been against the Iraq war – a claim that he would also use as a jibe aimed at Hillary Clinton – seemed to signal that he would refrain from sending the United States spiraling into another armed conflict.

“I’m the only one on this stage that said, ‘Do not go into Iraq, do not attack Iraq.’ Nobody else on this stage said that. And I said it loud and strong,” he said in February 2016 during one of several Republican debates. Months later, in June, Trump would use this argument to blame Hillary Clinton for the rise of ISIS.

“It all started with her bad judgment in supporting the war in Iraq in the first place. Though I was not in government service, I was among the earliest to criticize the rush to war, and yes, even before the war ever started,” he claimed.

The only problem? Trump was no dove prior to or after the invasion and occupation of Iraq. And since the destruction of Iraq – and his inauguration – Trump has sent the U.S. into a number of military conflicts and his administration is looking to promote even greater military interventionism in a region already steeped in violence.

When asked about Trump attitudes toward war, MIT professor and renowned linguist and political analyst Noam Chomsky told MintPress News that the idea that he was an anti-war candidate “was based on his criticisms of the Iraq and Libya attacks (which, contrary to his lies, he supported) and his ambiguous statements about reducing tensions with Russia – a good thing, if he meant it. But his actual policies are extremely dangerous.”

“[This includes] the sharp increase in the military budget, the weakening of restrictions on drone strikes, and the wild charges about Iran,” Chomsky said, adding that what really worries those who pay attention to these issues “is his megalomania and unpredictability…we know how someone who goes berserk over minor slights might react in a moment of crisis.”

Despite what some have claimed, Trump has never given a “loud and strong” argument against invading Iraq. According to a report from PolitiFact, during an interview with Howard Stern in 2002, Trump was asked whether or not he supported the U.S. invasion, to which he responded “Yeah, I guess so. I wish the first time it was done correctly.” In his 2000 book, The America We Deserve, he wrote:

“We still don’t know what Iraq is up to or whether it has the material to build nuclear weapons…if we decide a strike against Iraq is necessary, it is madness not to carry the mission to its conclusion. When we don’t, we have the worst of all worlds: Iraq remains a threat, and now has more incentive than ever to attack us.”

There’s no evidence of genuine opposition on Trump’s part regarding the invasion and occupation of Iraq. His few mealy-mouthed anti-war statements are meaningless in light of what he has said previously. And now, with the U.S. military under his command, Trump has already begun exercising armed force and is actively suggesting that his administration will engage in further military action, including putting more troops on the ground in Syria to combat ISIS.

According a report from the Washington Post, marines that have already been deployed there are establishing an outpost in Raqqa so they can fire on ISIS combatants. The report argues that the deployment “marks a new escalation in the U.S. war in Syria and puts more conventional U.S. troops in the battle.” The marines will soon be accompanied by special operations troops and attack helicopters.

Syria is certainly not the only country that will suffer from more U.S.-sanctioned violence. Nearly 19 million people in Yemen are now in need of aid, with more than seven million “not knowing where their next meal will come from,” according to the United Nations. Despite the UN having described Yemen as being “on the brink of famine,” the Trump administration has not been afraid to inflict further harm on the country’s vulnerable population. As millions of Yemenis are on death’s door, the U.S. government is escalating a horrific war in Yemen.

On March 3, the U.S. launched a second round of airstrikes that government officials alleged was part of a larger campaign meant “to roll back territorial gains [an Al Qaeda affiliated group] has made in the past two years.”

The U.S. launched over 30 strikes against alleged combatants and their safehouses between March 2 and 3. This escalation came only a few months after the notorious January raid during which at least two dozen civilians, including 10 children, were reported to have been killed. The media’s pointed focus on the commando raid came after it was revealed that a member of the Navy’s SEAL Team 6 was also killed.

The Trump administration has also been escalating tensions with Iran, a country that has faced tremendous pressure from previous administrations for its use of nuclear energy. After ballistic missile tests in February, former national security adviser Michael T. Flynn officially “put Iran on notice.” Donald Trump would later threaten Iran via Twitter: “Iran is playing with fire—they don’t appreciate how ‘kind’ President Obama was to them. Not me!”.

Iran is playing with fire – they don’t appreciate how “kind” President Obama was to them. Not me!

In February, James Mattis, who is currently serving as the U.S. Secretary of Defense, described Iran as being “the single biggest state sponsor of terrorism in the world.” Mattis has held an obsessive hatred towards Iran for decades, with Politico author Mark Perry describing him as having an “anti-Iran animus [that] is so intense that it led President Barack Obama to replace him as Centcom commander.” 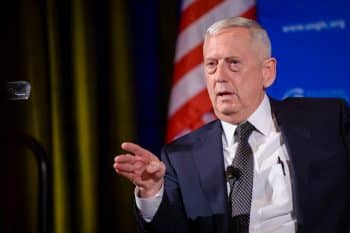 Mattis: Yet another imperialist warrior with obstinate war lust over delusional grievances.

Douglas Williams, a contributor for The Guardian and PhD student in political science at Wayne State University, told MintPress News that Trump never genuinely campaigned on being anti-war “aside from a brief moment after he clinched the Republican nomination for president.”

Williams argues, “he always beat that drum about ISIS, and then there was the talk of the ban on Muslims entering the United States.” That said, Williams believes that the anti-war movement has a chance of beating Trump “if they play the ball and not the man.” This would mean responding to Trump’s militarism by “connecting the already-outsized military budget to the things that they care about — health care and the economy.”

There is a demonstrable and significant difference between what Trump says and what his administration actually does. It is clear that his alleged anti-war sentiment is entirely imagined.

Saving Obamacare Is Not Enough — We Need Medicare for All

Will Washington Risk WW3 to Block an Emerging EU-Russia Superstate