Let the hagiographies begin. As soon as the late Chinese dissident Liu Xiaobo fell gravely ill, his legions of admirers in the West and elsewhere started going into overdrive, piling on the praise. As a corollary, they are condemning the Chinese “regime” that has treated him so “monstrously.” 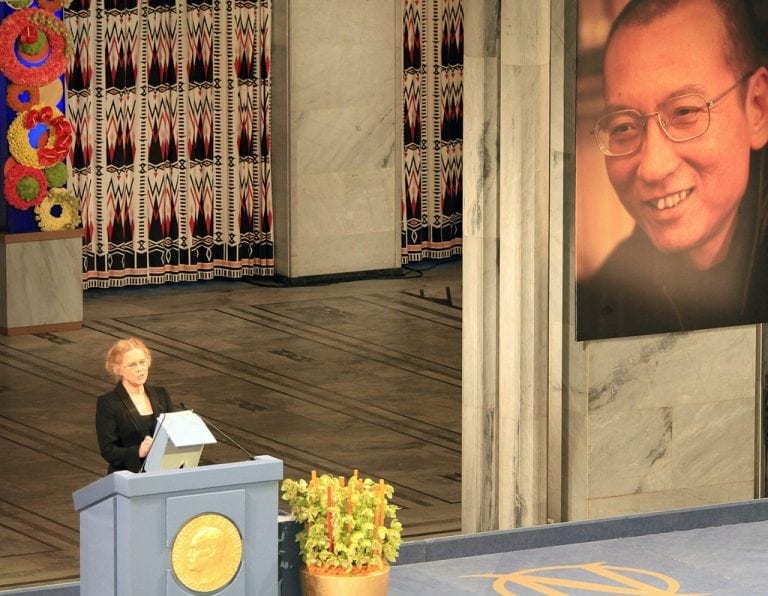 Liu Xiaobo being honored in 2010 by the Nobel Peace prize. The ceremony, bathed in sanctimony, was simply a propaganda prop to better attack China. Let us recall that the Nobel Prize committee has become a virtual appendage of Washington and its global softpower network. After all, notorious war criminals Henry Kissinger and Barack Obama got Nobels, too, for illusory peace work.

Representative are the outpourings of the New York Times, chief foreign-policy mouthpiece of the Democracy Empire. “Liu Xiaobo Has Suffered So That Others May Be Free,” headlined the paper in a column. Calling Liu “the Mandela of our age,” writer Nicholas Kristof effused: “You may be the man I most admire. For decades you’ve struggled and suffered to advance human liberty, at the cost of your own.”

What makes the West and ideological liberals worldwide so fulsome in their praise for a man his own government jailed the past eight years for subversion? In a word, democracy. Of all the often-conflicting ideas Liu Xiaobo advocated, one was central and steadfast: China’s salvation lies in wholesale Westernization and the adoption of liberal democracy. 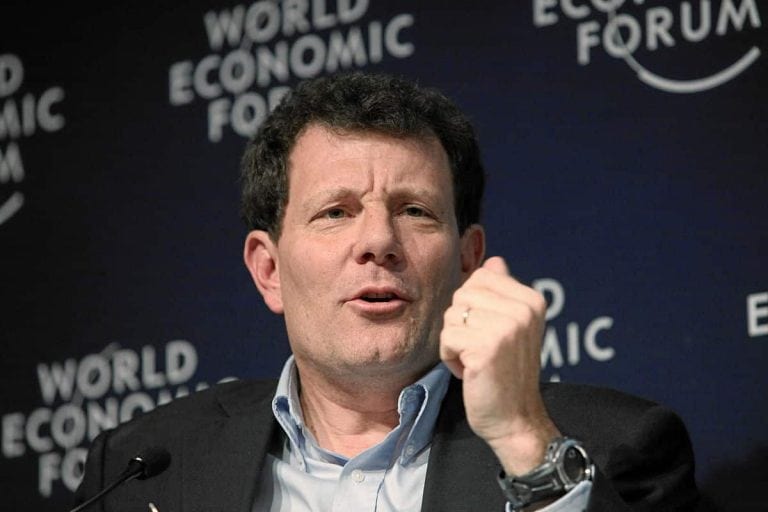 Nicholas Kristof: One of many pseudo journalists plying the trade of propagandists for the American empire.

That idée fixe of Liu’s, of course, explains the bitter and seemingly unbridgeable divide between his Western, liberal fans on one side, and the Chinese Communist Party and those who like what it has done for China and the world, on the other. From its laggard, backward position during the decades Liu was in his prime, China has caught up with or surpassed the West that he so esteems in many areas of human achievement. They include the economy, political clout, science & technology, innovation.

Today, the West’s long-held sense of superiority is crumbling. One remaining pillar is the democracy ideology — an unassailable conviction that democracy is the best, ultimate governance system for all humankind, regardless of national, cultural or historical differences. The assumed superiority of the democracy religion is what gives the Empire “moral” cover to proselytize it among less privileged peoples, and even impose it at gunpoint, as is often the case.

On the other hand, if China could be converted to democracy, that threat would disappear. Moreover, China would ipso facto come under the orbit of the Empire and become subject to its rules and machinations. Such a conversion — which the Chinese call “peaceful evolution” — has been the preferred Western strategy toward China since Deng Xiaoping opened up his country and began historic reforms.

Critical to the success of such a conversion strategy were Chinese advocates of democracy, especially those active within their own country. Liu Xiaobo fit the bill almost perfectly. Of course, his position would be further buttressed by the awarding of something like the Nobel Peace Prize. That he duly received, almost immediately after Beijing jailed him for subversion. 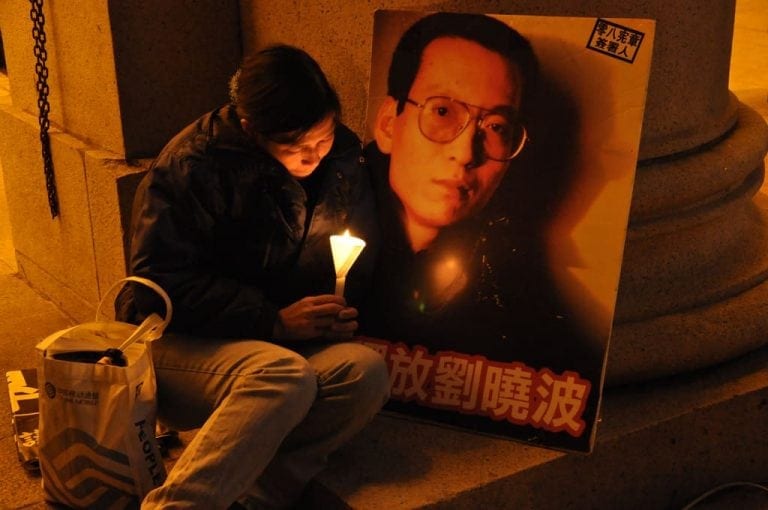 Lamenting Liu Xiaobo’s fate at the hands of the “monstrous” Chinese leadership. The photo is very likely staged. The hypocrisy surrounding the tears of the West for “dissidents” in countries Washington wishes to destabiize or demonize is amply documented.

Worse, to Chinese sensibilities, was perhaps his advocacy of all-out Westernization for China. He told an interviewer in 1988 that “to choose Westernization is to choose to be human.” Reported Britain’s Guardian newspaper: “He also faulted a television documentary, He Shang, or River Elegy, for not thoroughly criticizing Chinese culture and not advocating Westernization enthusiastically enough: ‘If I were to make this I would show just how wimpy, spineless and fucked-up [weisuo, ruanruo, caodan] the Chinese really are’. Liu considered it most unfortunate that his monolingualism bound him in a dialogue with something ‘very benighted [yumei] and philistine [yongsu],’ the Chinese cultural sphere … In a well-known statement of 1988, Liu said: ‘It took Hong Kong 100 years to become what it is. Given the size of China, certainly it would need 300 years of colonization for it to become like what Hong Kong is today. I even doubt whether 300 years would be enough’.”

Liu Xiaobo and the Western imperium are indeed a match made in political heaven. 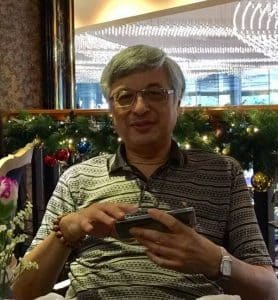 The author is an expert on Chinese/Western affairs residing in Hong Kong.

Time for the “International Left” to Take a Stand on Venezuela

The Cost of Not Having Single Payer: $1.4 Trillion Per Year