We share this planet; we do not own it.
WHAT HAVE YOU DONE FOR THE ANIMALS TODAY?

Not the definitive and comprehensive solution we seek (like all puppy mills should be banned, even for direct sales), but it’s a step in the right direction. 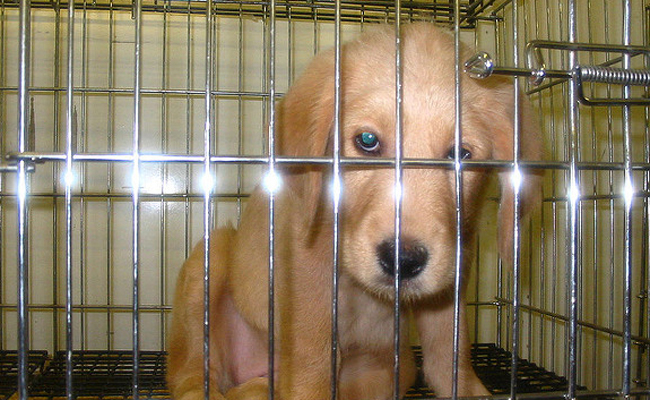 Animal rights advocates have worked for years to expose the cruelty of puppy mills and get them shut down. Puppy mills are large breeding facilities where dogs often live in horrendous conditions, without adequate food, water or veterinary care.

Over 230 cities and counties across the U.S. have already banned puppy mills, but no legislation outlawing these cruel money-making machines has been approved at the state level. However, the state of California is about to change that.

Assembly Members Matt Dababneh and Patrick O’Donnell introduced the Pet Rescue and Adoption Act (AB 485) to their legislature. The act would require pet stores offering dogs, cats or rabbits for sale to obtain these animals from an animal shelter or rescue group. The California Senate passed AB 485 by a vote of 32 – 0. Governor Jerry Brown now has until October 15 to sign the bill into law.

This legislation could lead to shutting down numerous puppy, kitten and rabbit mills in the U.S.

As she pointed out in her petition:

“Thousands of companion animals are killed in California shelters every year, while commercial breeders continue to mass produce more and more to meet the demand for puppies and kittens. It’s a vicious cycle that pet stores are supporting, but the state could soon end that.”

Her petition has garnered almost 70,000 signatures from Care2 activists.

If Governor Brown signs the bill, California will become the first state to effectively outlaw puppy mills by prohibiting pet stores from selling puppies, kittens and rabbits that don’t come from shelters or rescue organizations. Private breeders would still be permitted to sell directly to individuals.

The law, which would go into effect on January 1, 2019, also requires pet stores to maintain records showing where each animal comes from, and to display that information. A violation would carry a $500 fine.

A summary and fact sheet attached to the bill explained that the law was also intended to address the minimal standards set by the U.S. Department of Agriculture (USDA).  For example, the federal Animal Welfare Act mandates that breeders selling puppies to pet stores must be licensed and inspected by USDA, but to meet those federal standards breeders have to provide a cage that is a miniscule “six inches larger than the animal it houses and cleaned just once a week.”

Currently, 36 cities in California, including Sacramento, Los Angeles and San Francisco, already have a similar puppy mill ban in place. Numerous pet stores across the state have adopted the proposed business model, teaming up with local rescues and shelters.

As a resident of California, I have adopted all three of my cats, Snowshoe, Jaspar and Sgt. Pepper, from shelters, so I am delighted at the leadership California has shown in the fight for dismantling puppy mills.

A huge shout-out to all the animal advocates working hard to eliminate puppy mills, including Alicia Graef and all the Care2 members who signed her petition.

The focus on puppy mills distracts from the greater issue…. Why are kill shelters legal? Furthermore why distinguish between so called legitimate breeders & puppy mills…. Puppies from legitimate breeders that do not meet the standards for a breed are often destroyed…. As improvements for animals come & go, animals are added to and taken off endangered species lists, horse slaughter comes & goes… I would be cautious about the banning of puppy mills in california… Those who profit from puppy mills are often at the lower end of the economic scale… They do not have powerful lobbies, as do… Read more »

In a nation guided by judeo.christian dominion, a law favorable to animals that does not threaten the right to slaughter, may be passed, only to be retracted…. Foie Gras was banned in Chicago, but the ban was lifted and foie gras is now once again available at upscale restaurants and food markets: http://www.chicagotribune.com/news/plus/ct-chicago-foie-gras-ban-anniversary-20160424-story.html “on Oct. 25, 2005,… committee members approved the ban and sent it to the full City Council for a vote. (Heather Stone/Chicago Tribune)” ‘on May 14, 2008, after the City Council repealed its ban on foie gras.’ In India it is against the law to produce, sell… Read more »