Home AMERICAN BRAINWASH Protests in Iran: Made in the USA and Israel

Protests in Iran: Made in the USA and Israel

Protests in Tehran and other Iranian cities have a familiar character to them. They don’t erupt spontaneously. They’re manufactured, needing leadership. Color revolutions are a US specialty, numerous ones staged earlier. Orange revolution 2.0, the most recent previous one, ousted Ukraine’s democratic government, replacing it with putschist [neonazi] tyranny.

What’s happening in Iran since December 28 followed agreement by Trump and Netanyahu to confront Iran, wanting its government toppled, replaced by pro-Western puppet rule. What’s going on for the past five days appears to be another attempted color revolution – doomed to fail, war perhaps the alternative follow-up option, the favored strategy of Washington and Tel Aviv.

They’ll be addressed and handled equitably, “depriv(ing) enemies of the Islamic revolution of the opportunity to manipulate the present situation further."

On Sunday, two individuals were lethally shot in Dorud, a western Iranian city. According to Lorestan province political and security affairs official Habibollah Khojastepour, “no bullet was fired by military, law enforcement, and security forces at the people.”

Were pro-Western provocateurs responsible, perhaps recruited by the CIA or Mossad?

Khojastepour blamed the presence of Takfiri and “hostile groups…directed by foreign intelligence services.”

According to Iranian television, 12 fatalities have occurred as of New Year’s day, without further elaboration. During the US orchestrated 2013/14 Euromaidan coup d’etat, Kiev snipers killed protesters and police.

Something similar is going on in Iran. Were CIA and/or Mossad-recruited assassins responsible for lethal shootings? Iranian security forces are dedicated to preserving and protecting the Islamic Republic. They’re able to deal with the current situation and restore order. How much longer will it take? How many more Iranians will foreign dark forces kill or injure before it’s achieved?

“We are a free nation, and based on the Constitution and citizenship rights, people are completely free to express their criticism and even their protest” – provided they act nonviolently, adding:

"Iranians may openly express views on all issues. We believe that the government and the country belong to the people, and the people must properly express what they want. We must not allow an atmosphere to be created in the country under which supporters of the revolution and people will be concerned about their lives and security.”

At the same time, Rouhani slammed Trump, saying he’s “against the Iranian nation from head to toe [and] has no right to feel sorry” for its people he doesn’t give a damn about. 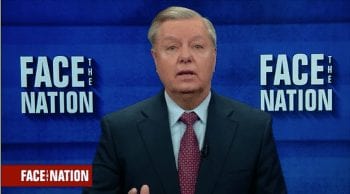 The ubiquitous and vile war hawk Lindsay Graham (R-SC) being given his usual big media platform by CBS Face the Nation to mislead the American masses. Wherever this guy shows up, excrement surely follows.

As expected, Western media reports have been one-sided, expressing hostility toward Iranian governance.  On CBS Sunday’s Face the Nation, neocon Senator Lindsey Graham called for Trump “to lay out a plan” to confront Iran.

Does he have another US imperial war in mind, Washington’s favored strategy!

On the Futility of American Politics

The anti-Russia Tale pretty much ran its course and lost all legitimacy months ago. December was the month of of transitioning the rage over what we Americans do, onto Israel. That’s really rather pathetic (but safer than targeting China, the rising world power).

Quick lesson about the Mideast: Israel is a tiny country (roughly the size of New Jersey), the sole Jewish nation, surrounded by oil-rich Arab countries, all of which are armed to the teeth by China, Russia, and the US, some of which seek to impose a 100% “pure” Moslem Mideast. Jews are indigenous to this bit of land, and are determined to survive. Nevertheless, they are portrayed as a military mega-power with control over the US government because (fill in the blank). America’s agenda in the Mideast is to protect US oil interests. What we learned from the Arab Oil Embargo of the 1970s is that high fuel prices and long lines at the gas pumps can damage the careers of US politicians. Stop looking for scapegoats and start studying the issues that drive America’s cravings for war.