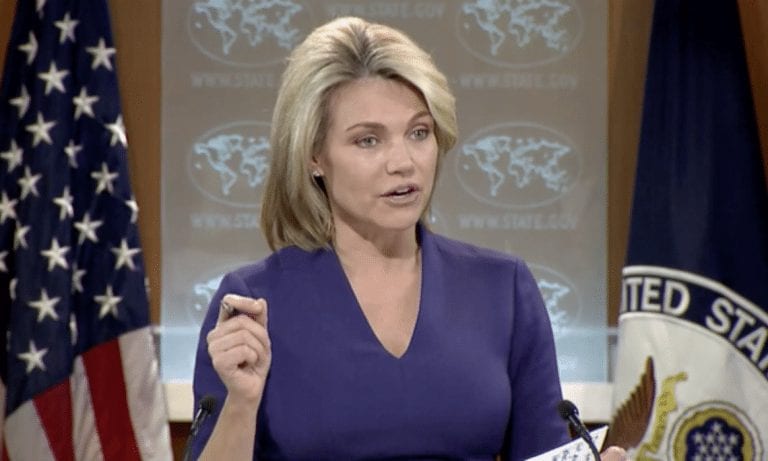 Just weeks ago, two firebreathing neoconservative war whores were promoted to the highest echelons of influence within the Trump administration. The new National Security Advisor John Bolton only has one key on his piano, and that key is war. Neoconservative hawk Mike Pompeo was promoted from the head of the notoriously vicious Central Intelligence Agency to Hillary Clinton’s old job as Secretary of State after famously announcing that he was trying to make the CIA “a much more vicious agency.”

Trump supporters talk a lot about the Deep State as though it is something separate from and at odds with the Trump administration. If that was ever the case, it certainly isn’t anymore. Trump might be in a power struggle with certain factions or aspects of the power establishment, but you don’t promote bloodthirsty swamp monsters like John Bolton and Mike Pompeo to positions of maximum impact if you’re fighting the Deep State.

Pompeo’s State Department has issued a press release by way of its soulless spokeswoman Heather Nauert about the nonsensical new report that the Syrian government once again decided to kill a bunch of children with poison gas at the least strategically opportune moment imaginable. The press release is riddled with falsehoods and jaw-dropping accusations which cannot possibly be based in fact since they were made mere hours after the allegations surfaced, long before any sort of investigation into them could have even begun, much less been completed.

Let’s go through this press release line by line, from beginning to end:

“We continue to closely follow disturbing reports on April 7 regarding another alleged chemical weapons attack, this time targeting a hospital in Douma, Syria. Reports from a number of contacts and medical personnel on the ground indicate a potentially high number of casualties, including among families hiding in shelters.”

The assertion that the “regime’s history of using chemical weapons against its own people is not in dispute” is a brazen lie. The entire other half of the conflict consistently denies it, including Bashar al-Assad and Vladimir Putin personally, and many respected western journalists and scholars remain skeptical of the official NATO narrative for a whole variety of reasons.

We should note here that that the “ground” these sources are “on” is controlled by the Al Qaeda-allied terrorist group Jaysh al-Islam, and the reports we’re seeing sourced by the press are in fact coming from the western-backed and Al Qaeda-affiliated propaganda firm known as the White Helmets and the “pro-opposition Ghouta Media Center“. There’s no reason to believe that there is anyone “on the ground” in Douma willing to make themselves available as a source who is not supportive of jihadist factions and the western empire’s longstanding regime change agenda in Syria.

“These reports, if confirmed, are horrifying and demand an immediate response by the international community.”

If confirmed. That’s an open acknowledgement from the State Department that these reports are unconfirmed, which renders all the accusations which come later in this press release nonsensical.

“Immediate response by the international community” is exactly what Libya got in response to deceitful narratives promulgated by unquestioning media outlets. Now the nation which the west raped, brutalized and left for dead under the pretense of humanitarianism is a humanitarian nightmare, and NATO doesn’t care because the empire got the real job done in 2011.

“The United States continues to use all efforts available to hold those who use chemical weapons, in Syria and otherwise, accountable. The regime’s history of using chemical weapons against its own people is not in dispute, and in fact nearly one year ago on April 4, 2017, Assad’s forces conducted a sarin gas attack on Khan Sheikhoun, which killed approximately 100 Syrians.”

The assertion that the “regime’s history of using chemical weapons against its own people is not in dispute” is a brazen lie. The entire other half of the conflict consistently denies it, including Bashar al-Assad and Vladimir Putin personally, and many respected western journalists and scholars remain skeptical of the official NATO narrative for a whole variety of reasons. It is absolutely ridiculous to say everyone agrees that in a region crawling with known terrorist factions who have a known history of chemical weapons attacks, and in a nation long targeted for regime change by the western empire, the only possible explanation for chemical weapons reports is a government which stands nothing to gain and everything to lose by using them.

“The Assad regime and its backers must be held accountable and any further attacks prevented immediately.”

Whoa! Held accountable? Immediately? What happened to “if confirmed”??

“Russia, with its unwavering support for the regime, ultimately bears responsibility for these brutal attacks, targeting of countless civilians, and the suffocation of Syria’s most vulnerable communities with chemical weapons. By shielding its ally Syria, Russia has breached its commitments to the United Nations as a framework guarantor. It has betrayed the Chemical Weapons Convention and UN Security Council Resolution 2118. Russia’s protection of the Assad regime and failure to stop the use of chemical weapons in Syria calls into question its commitment to resolving the overall crisis and to larger non-proliferation priorities.”

Russia “ultimately bears responsibility” for an attack with no evidence? Again, mighty big words for a press release about a completely unconfirmed report.

I’ve never seen a convincing explanation as to why Assad would be “targeting” civilians at all. I could see criticizing him for, like America, not taking enough measures to protect civilians from air strike crossfire, but why would he “target” them? Is killing civilians with internationally banned weapons just some bizarre sexual kink of his? One he only discovered in 2011? Nobody has ever given me an answer to this that fits into what I know about motive and human nature.

“The United States calls on Russia to end this unmitigated support immediately and work with the international community to prevent further, barbaric chemical weapons attacks.”

Half of this press release about Syria is actually about how awful and evil Russia is, the same nation the western empire has been finding any excuse to escalate tensions with since 2016 in a steadily escalating new cold war. Funny how this is all happening after the spectacular collapse of the “Novichok” narrative the UK was trying to use to unite Europe in aggressions against Russia.

Truth is the first casualty of war. Because of its reliance on psyops, propaganda and narrative shaping, this is especially true of cold war.

And that’s it for that insane State Department press release and all its accusations and demands for an international response. For further reading on the latest regime change Syria narrative being promulgated by the western war machine, check out this brand new article by independent investigative journalist Vanessa Beeley and this one by the always excellent Moon of Alabama. Both explain how this latest allegation fits in with an already highly suspicious pattern and explain how absurd it is to believe what we’re being told to believe. I wrote another article about this a few hours ago as well.

Remember: they wouldn’t be working so hard to manufacture your consent for these strategic power grabs if they didn’t need your consent. Refuse to be bullied and manipulated into handing it over to them.

Many dead, including women and children, in mindless CHEMICAL attack in Syria. Area of atrocity is in lockdown and encircled by Syrian Army, making it completely inaccessible to outside world. President Putin, Russia and Iran are responsible for backing Animal Assad. Big price…

….to pay. Open area immediately for medical help and verification. Another humanitarian disaster for no reason whatsoever. SICK!

If President Obama had crossed his stated Red Line In The Sand, the Syrian disaster would have ended long ago! Animal Assad would have been history!