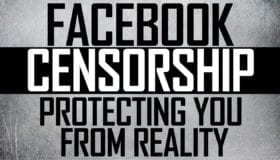 With the approach of a cataclysmic war, and as the truth is more desperately needed than ever, the corporatocracy is busy plugging all possible leaks in their wall of disinformation, aka as the "free press." What a joke. —PG

The formal reason is that southfront.org doesn’t meet Facebook’s Community Standards. [Is that a laugh or what?] Here you can find people sharing examples how Facebook is censoring SouthFront’s articles:

This goes as part of Facebook’s expanding censorship campaign announced by Mark Zuckerberg during a joint hearing of Senate Judiciary Committee and Commerce Committee on April 10.

In this situation, we kindly recommend you to follow SouthFront’s news directily on southfront.org or via our accounts in Telegram https://t.me/southfronteng and Twitter https://twitter.com/southfronteng

Furthermore, since the start of the week, southfront.org has been repeatedly attacked. Our team is now working to repel these attacks.

The censorship on Facebook, attacks on southfront.org as well as resumed attempts to discredit SouthFront are a part of the new wave of aggressive actions against the world’s alternative media.

It’s likely that this campaign is military preparations ahead of a big conflict in the Middle East. the growing possibility of a large-scale military conflict in Syria.

This systems accepts all types of cards, PayPal, Amazon Payments, bitcoin (FAQ is under the main text, in P.S.)

We are in the Last Days before all Hell breaks loose