HELP ENLIGHTEN YOUR FELLOWS. BE SURE TO PASS THIS ON. SURVIVAL DEPENDS ON IT.
Bruce A. Dixon, BAR managing editor
The only good thing I can think to say about the Obama presidency is really kind of negative too, a monstrous crime he almost committed, but backed away from at the last minute. It was the only time in Obama’s political career that I’ve seen him take what might remotely be described as a risk. It was the the aftermath of the August 2013 chemical weapons attack on Ghouta, a suburb of the Syrian capital Damascus which killed 1,300 people. While all the TV talking heads and publicly visible admirals and generals blamed the nerve gas attack on the Syrian government, Obama bucked the warmongering tide which he himself had helped raise, opting NOT to escalate the US war in Syria with carpet bombings of its infrastructure and a no-fly zone, the prelude to an inevitable invasion. 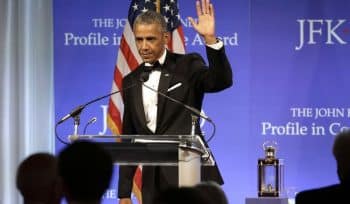 Obama, a loyal shill for the empire. It will take decades for this creep's nefarious influence and ill-deserved reputation to be neutralised and wiped clean, if ever.

According to Seymour Hersh, the reporter who revealed the My Lai massacre to the world four decades earlier, Obama was hemmed in by his own dedication to America’s historically belligerent anti-Iran and pro-Israel policies in the Middle East on the one hand, and some of his spooks and generals on the other who realized that if the Syrian regime was overthrown, it would be replaced by Kurdish militias controlling some areas, by US and Saudi backed jihadis who want to make the 10th century great again in charge of others, by remnants and factions of the Syrian army in a few more places, by Israeli and Turkish annexation of areas near their borders, and direct intervention by neighboring Iran – in short a chaotic regional bloodbath, the uncertain outcome of which would dwarf the mess Obama made in Libya.

So Obama blinked. He accepted a Russian proposal for the handover of Syrian chemical assets, and more talks. While the bloody US-Israeli-Saudi-Turkish and NATO instigated civil war in Syria dragged on and on, it did not mushroom into the much larger disaster that might have been, and might still become.

That was a good thing. At the end of 2013 and in early 2014 Seymour Hersh revealed that Obama almost certainly knew that Ghouta was a false flag attack. Chemical weapons are extremely volatile. They degrade and destroy the rockets and delivery systems used to deploy them within hours, and emit trace chemicals that are easily detectable at moderate distances by rings of remote sensors US and Israeli intelligence agencies have placed near all the Syrian army’s bases and staging depots. None of those sensors picked up any chemical weapons activity. Jihadi extremists armed and funded by the US and the Saudis were known to include personnel experienced in the manufacture, arming and deployment of chemical agents. Some had even been busted by Turkish police attempting to buy and transport sarin, its manufacturing equipment and precursor chemicals across Turkey’s border with Syria.

Beginning in 2012 after the fall of Libya, Hillary Clinton and President Obama arranged for the shipment of weapons which included surface to air missiles out of Libya and into the hands of their favorite Syrian rebels including ISIL, al Nusra and Al Qaeda, various factions of which were backed by Qatar, Israel, the Saudis and Turkey. But despite lavish funding, epic brutality, more military hardware than they could wield and the unstinting media and diplomatic support of the West, their bloodthirsty puppets were losing the Syrian civil war. So they staged a chemical attack against an area they controlled with the intent of blaming it on the Syrian government. Their aim was to provoke the US into knocking over al Assad so they can fight with the Kurds, Turks, Iranians Saudis, Israelis and Syrians maybe backed by Russian and/or Iran over the possibly radioactive remains of that unhappy country. It almost worked.

In 2014, the Syrian government handed over all or nearly all its chemical weapons arsenal to international authorities including the Organization for the Prohibition of Chemical Weapons for destruction. There were minor charges in 2015 and 2016 that chlorine gas was used in a few places, but they were small scale affairs and chlorine is so ineffective as a military tool it’s hard to make a case that any government with a minimally competent army would use it.

The next major allegation of chemical warfare in Syria was in 2017, when 19 people died near Khan Sheikhoun, a rebel held town in northwest Syria. The Americans and their stooges as usual blamed it on the Syrian government. The Russians offered a different explanation, suggesting that government forces had bombed a place where sarin had been stored. Either way, the timing of the incident made no military sense from the standpoint of the Syrian government. They continued to slowly and surely win the war, shrinking the rebel held areas each month, and had no reason to jeopardize their gains by provoking the US. In recent weeks, Trump Secretary of War Defense admitted that previous allegations that the Syrian government used chemical weapons were false, a fact barely reported on at all by US corporate news sources.

While US presidents come go, there is a permanent layer of cops, spooks, fixers, military types, intelligence professionals, think tankers we can call the deep state, all beholden to the lords of capital, especially the energy industry and America’s galaxy of military contractors. Some are Republicans, some are Democrats, and for all we know some might be nonpartisan. Among them are the people who helped prevent Barack Obama from launching a war in which a dozen nations would have fought and millions might have died, which could easily have escalated into a nuclear conflict between the US, Israel and NATO on the one hand and Russia on the other. 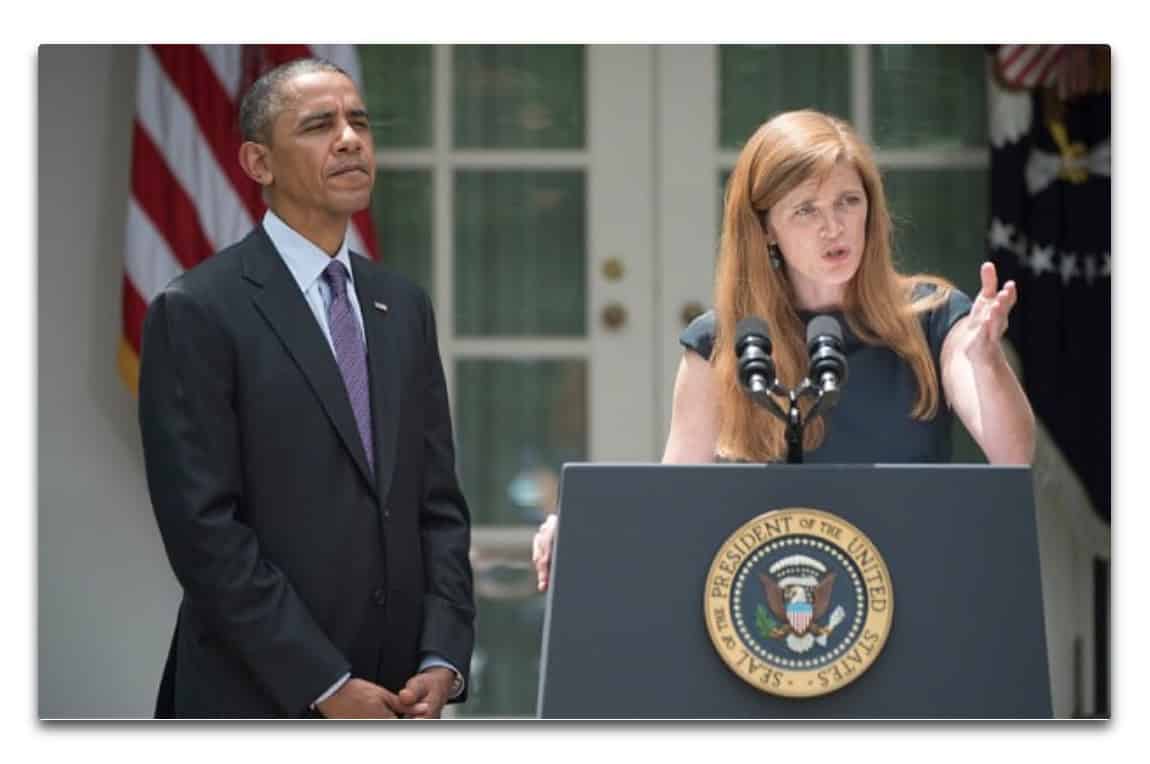 Obama with UNO ambassador Samantha Power—a horrid Neocon harpie that Trump's Nikki Haley has exceeded in vileness, and that is no small feat.

We can hope that some of these forces, none of whom are friends of peace or justice, will restrain Donald Trump, as they did Obama. The odds don’t look good. Hersh’s January 2016 article in the London Review of Books identifies General Michale Flynn as one of thoe who opposed some of the most drastic war plans for Syria, and he’s gone. Hope is nothing we can count on. Hope is, as Derrick Jensen says, a longing for a future condition over which we have no agency. Hope might lead some of us to the Democrats, who regularly pretend to be the party of peace when Republicans are in power, and some leftists pretend to believe them. That’s acting out of hope because we have no agency over the Democratic party. A three part investigative series by the World Socialist Web Site identifies 57 CIA, military, Homeland Security and other intelligence professionals running as Democrats for seats in Congress this year, nearly all backed by the Democratic Congressional Campaign Committee, except in the couple of cases where two of these are running against each other. We have to grow up and admit to each other that Democrats never have and never will be a peace party.

When we grow up, when we abandon hope, that longing for the future condition over which we have no agency, all that’s left is the responsibility to take action. Our fates are truly in our own hands. The capitalist warfare state can only produce war, against humans and against the planet itself. We must envision and plan for its end, organize ourselves and build the traditions and institutions that will take its place.

For Black Agenda Radio, I’m Bruce Dixon. Find us on the web at www.blackagendareport.com, where you can subscribe to our free weekly email newsletter, on SoundCloud, and hopefully soon coming to iTunes.

Bruce Dixon is managing editor at Black Agenda Report and a state committee member of the GA Green Party, which unlike Democrats and Republicans unequivocally supports network neutrality. He lives and works in Marietta GA and can be reached via email at bruce.dixon@blackagendareport.com.

Syria: The Ongoing Battle of Lies vs. Truth (Video & text)