How the Guardian newspaper fulfills George Orwell’s prediction of ‘Newspeak’ 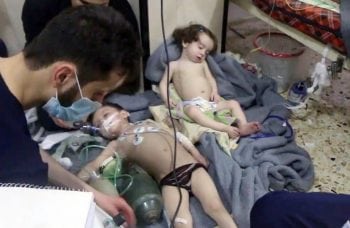 On Sunday April 15th, Britain’s Guardian bannered “OPCW inspectors set to investigate site of Douma chemical attack” and pretended that there was no question that a chemical attack in Douma Syria on April 7th had actually occurred, and the article then went further along that same propaganda-line, to accuse Syria’s Government of having perpetrated it. This ‘news’ story opened [and clarificatory comments from me will be added in brackets]:

UN chemical weapons investigators were set on Sunday to begin examining the scene of a chemical attack in the Syrian city of Douma, which had prompted the joint US, French and British strikes against military installations and chemical weapons facilities near the capital, Damascus.

The arrival of the delegation from the Organisation for the Prohibition of Chemical Weapons (OPCW) came as the Syrian military announced that it had “purified” [no source provided, but this — from 7 March 2018 — is the only source that existed prior to the April 14th missiles-invasion of Syria, and its meaning is very different: https://translate.google.com/translate?hl=en&sl=fr&u=https://sana.sy/fr/%3Fp%3D113016&prev=search] the region of eastern Ghouta, of which Douma is a part, after a two-month campaign that killed nearly 2,000 civilians [no source provided as regards either the number, or that all of them were ‘civilians’ and that none of them were jihadists or “terrorists”], following years of siege.

“Units of our brave armed forces, and auxiliary and allied forces, completed the purification of eastern Ghouta, including all its towns and villages, of armed terrorist organisations,” the general command statement said.

In other words: the Guardian’s ‘journalist’ had substituted the word “clear” by the word “purify” and did this after having already asserted but not documented, that the Government had just completed “a two-month campaign that killed nearly 2,000 civilians.” When the Syrian Government announces that an area has been “cleared of terrorists (or of terrorism),” the U.S.-allied propagandist uses the word “purify,” such as “purified the region of eastern Ghouta” or “the purification of eastern Ghouta, including all its towns and villages, of armed terrorist organisations.” But by the time that the reader gets there to “purification … of armed terrorist organisations,” the reader has already been indoctrinated to believe that Syria’s Government is trying to “purify” land, or perpetrate some type of ethnic-cleansing. That’s professional propaganda-writing; it is not professional journalism.

Later, the article asserts that, “The OPCW mission will arrive in Douma eight days after the chemical attack, and days after the area fell to the control of Russian military and Syrian government forces. That delay, along with the possibility of the tampering of evidence by the forces accused of perpetrating the attack, raises doubts about what the OPCW’s inspectors might be able to discover.” However, a fierce debate is being waged over whether this was not any real “chemical attack” but instead a staged event by the jihadists in order to draw Trump back into invading Syria. In other words: any journalistic reference yet, at this time, to the event as “the chemical attack” instead of as “the alleged chemical attack” is garbage, just as, prior to the guilty-verdict in a murder trial, no journalistic reference may legitimately be made to the defendant as “the murderer,” instead of as “the defendant.” That is lynch-mob ‘journalism’, which Joseph Goebbels championed.

[dropcap]A[/dropcap]nother story in the April 15th Guardian was “Pressure grows on Russia to stop protecting Assad as US, UK and France press for inquiry into chemical weapons stockpiles” and this one pretended that the issue is for “Russia to stop protecting Assad,” who is the democratically elected and popular President of Syria, and not to stop the invasion of Syria since 2011 by U.S. and Saudi backed foreign jihadists to overthrow him. Furthermore, as regards “press for inquiry into chemical weapons stockpiles,” the real and urgent issue right now is to allow the Organization for the Prevention of Chemical Weapons (OPCW) into Douma to hold an independent and authoritative investigation into the evidence there. Russia pressed for it at the U.N. Security Council and the U.S. and its allies blocked it there. But the OPCW went anyway — even after the U.S.-allied invasion on April 14th — and this courageous resistance by them against the U.S. dictatorship can only be considered heroic. Now that they are there, the remaining jihadists in Douma are firing shots at them to drive them away.

That type of ‘news’-reporting is virtually universal in The West, among the U.S. and its allied governments, which refer to themselves as ‘democracies’ and refer to any Government that they wish to overthrow and replace by their own selected dictator, as ‘dictatorships’, such as these regimes had referred to Iraq in 2003, Libya in 2011, Syria forever, and Ukraine in 2014. It’s Newspeak.