Home THE USAAmerican Way of Life Empire, Oligarchy and Democracy

Deepening inequality, unravelling democracy and wars without end: welcome to the best of all possible worlds 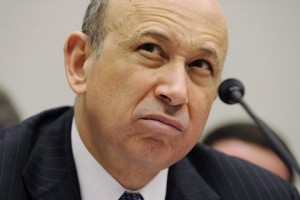 Goldman Sachs' CEO Lloyd Blankfein. Emblematic of the power behind the throne.

THE TWIN SWELLING HEADS of Empire and Oligarchy are driving our country into an ever-deepening corporate state, wholly incompatible with democracy and the rule of law.

Once again the New York Times offers its readers the evidence. In its February 25, 2010 issue, two page-one stories confirm this relentless deterioration at the expense of so many innocent people.

The lead story illustrates that the type of massive speculation—casino capitalism, Business Week once called it—in complex derivatives is still going strong and exploiting the weak and powerless who pay the ultimate bill.

Titled “Banks Bet Greece Defaults on Debt They Helped Hide,” the article shocks even readers hardened to tales of greed and abuse of power. Here are the opening paragraphs: “Bets by some of the same banks that helped Greece shroud its mounting debts may actually now be pushing the nation closer to the brink of financial ruin.”

“Echoing the kind of trades that nearly toppled the American Insurance International Group /AIG/, the increasingly popular insurance against the risk of a Greek default is making it harder for Athens to raise the money it needs to pay its bills, according to traders and money managers.”

“These contracts, known as credit-default swaps, effectively let banks and hedge funds wager on the financial equivalent of a four-alarm fire: a default by a company, or in the case of Greece, an entire country. If Greece reneges on its debts, traders who own these swaps stand to profit.”

“It’s like buying fire insurance on your neighbor’s house–you create an incentive to burn down the house,” said Philip Gisdakis, head of credit strategy at UniCredit in Munich.

These credit-default swaps increase the dreaded “systemic risk” that proliferates until it lands on the backs of taxpayers, workers and savers who pay the price. And if Greece goes, Spain or Portugal or Italy may be next and globalization will eventually bring the rapacious effects of mindless speculation to our shores.

Greece got into financial trouble for a variety of reasons, but it was widely reported that Goldman Sachs and other big banks showed them, for generous fees, how to hide the country’s true financial condition. Avarice at work.

Note two points. These derivatives are contracts involving hundreds of billions of dollars and are essentially unregulated. These transactions are also essentially untaxed, unlike Europe’s value added tax on manufacturing, wholesale and retail purchases. The absence of government restraints produces unlimited predation.

Both Presidents George W. Bush and Barack Obama believe they have unbridled discretion to engage in almost any overt or covert acts. That is a definition of Empire that flouts international law and more than one treaty which the United States helped shape and sign. ..Equipped with remote and deadly technologies like drones flying over Pakistan and Afghanistan by operators in Nevada, many civilians have been slain, including those in wedding parties and homes. Still, it is taking 15,000 soldiers (U.S. and Afghan) with the most modern armaments to deal with three hundred Taliban fighters in Marja who with many other Afghans, for various motivations, want us out of their country. Former Marine Combat Captain Matthew Hoh described these reasons in his detailed resignation letter last fall.

As astute investors in the real economy have said, when money for speculation replaces money for investment, the real economy suffers and so do real people. Remember the Wall Street collapse of 2008 and who is paying for the huge Washington bailout.

The other story shows that the Presidency has become a self-driven Empire outside the law and unaccountable to its citizens. The Times reports “how far the C.I.A. has extended its extraordinary secret war beyond the mountainous tribal belt and deep into Pakistan’s sprawling cities.” Working with Pakistan’s counterpart agency, the C.I.A. has had some cover to do what it wants in carrying out “dozens of raids throughout Pakistan over the past year,” according to the Times.

“Secret War” has been a phrase applied numerous times throughout the C.I.A’s history, even though the agency was initially created by Congress right after World War II to gather intelligence, not engage in lethal operations worldwide.

Unrestrained by either Congress or the federal courts, Presidents say they can and do order their subordinates to go anywhere in the world, penetrate into any country, if they alone say it is necessary to seize and destroy for what they believe is the national security. American citizens abroad are not excluded. Above the law and beyond the law spells the kind of lawlessness that the framers of our constitution abhorred in King George and limited in our country’s separation of powers.

Because our founders would not tolerate the President being prosecutor, judge, jury and executioner, they placed the war-declaration and appropriations authorities in the Congress.

Both Presidents George W. Bush and Barack Obama believe they have unbridled discretion to engage in almost any overt or covert acts. That is a definition of Empire that flouts international law and more than one treaty which the United States helped shape and sign.

Equipped with remote and deadly technologies like drones flying over Pakistan and Afghanistan by operators in Nevada, many civilians have been slain, including those in wedding parties and homes. Still, it is taking 15,000 soldiers (U.S. and Afghan) with the most modern armaments to deal with three hundred Taliban fighters in Marja who with many other Afghans, for various motivations, want us out of their country. Former Marine Combat Captain Matthew Hoh described these reasons in his detailed resignation letter last fall.

Mr. Obama’s national security advisor, Ret. General James Jones estimated that there are about 100 Al Qaeda in Afghanistan with the rest migrating to other countries. And one might add, those whose migrate are increasing their numbers because they cast themselves as fighting to expel the foreign invaders.

The American people must realize that their reckless government and corporate contractors are banking lots of revenge among the occupied regions that may come back to haunt. We have much more to lose by flouting international law than the suicidal terrorists reacting to what they believe is the West’s state terrorism against their people and the West’s historical backing of dictatorships which oppress their own population.

America was not designed for Kings and their runaway military pursuits. How tragic that we have now come to this entrenched imperium so loathed by the founding fathers and so forewarned by George Washington’s enduring farewell address.

Where are “We the People”?

RALPH NADER is a consumer advocate, lawyer, and author. His most recent book – and first novel –  is, Only The Super Wealthy Can Save Us. His most recent work of non-fiction is The Seventeen Traditions

On the Founding of Israel and the Slow...