JIHAN HAFIZ, BENGHAZI, LIBYA: There is already talk of US military intervention in Libya. Here in Benghazi, Libyans overwhelmingly reject this possibility.

UNIDENTIFIED (SUBTITLED TRANSLATION): You need to understand there are political issues going on in Libya now. The entire Libyan population is insisting against US intervention or any involvement of foreign powers within Libya.

HAFIZ: Rebels in Benghazi are also rejecting calls from US senators John McCain and Joe Lieberman to send the liberated territory weapons to fight Gaddafi’s forces. They insist they defeated the security forces of Muammar al-Gaddafi in Benghazi without the use of weapons and without the support of a foreign government. Their victory in the bloody battle for Benghazi has engendered a strong sense of unity and nationhood in a country known for tribal divisions.

UNIDENTIFIED (SUBTITLED TRANSLATION): Neither a European nor an American military should intervene in the country, but we want to put pressure on Gaddafi’s regime to fall. The free Libyan youth will, God willing, oust this criminal dictator from Libya. We only want them to stand strong with us and prevent Gaddafi from bringing mercenaries from other African countries.

HAFIZ: The residents of Benghazi criticized leaders who have maintained good relations with Gaddafi even after the bloodshed, from Europe to Latin America.

TEXT ON SCREEN: Berlusconi, your friend is a tyrant dictator.

UNIDENTIFIED: South America actually know probably even more than the Middle East and North Africa what dictatorship is, so we advised them to really be cautious about what they hear from their leader.

HAFIZ: Meanwhile, the rebels celebrated a new-found unity with Arab nations. They raised the flags of Egypt, Tunisia, and Palestine.

UNIDENTIFIED (SUBTITLED TRANSLATION): It makes me proud. I am proud to be Egyptian, and I’m proud to be an Arab. Lift your head up high! We are Arabs!

TEXT ON SCREEN: We support the Libyan people and the 17th of February Revolution. Long live a free and independent Libya!

HAFIZ: This truck coming from Egypt is loaded with donated food, 16 tons of pasta, rice, oil, and sugar. Inspired by Arab revolts in neighboring Egypt and Tunisia, the Libyan people here are welcoming this food convoy from Egypt.

CROWD: The Egyptians have arrived!

HAFIZ: Secretary of State Hillary Clinton expressed concern over food shortages, but food is still being given out for free in these streets as donations keep pouring in from Libya’s neighbors. Jihan Hafiz for The Real News in Benghazi, Libya. 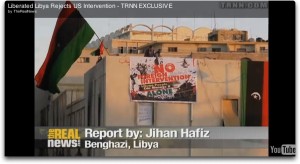 ARCHIVES: US actor-director Sean Penn on Hollywood and protests against global capitalism