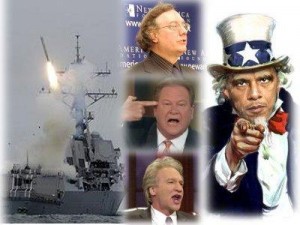 Americans are warlike – as long as they think they can be victorious. These nominal Democrats and Republicans “differ only on who they want to see doing the dominating.” Today, a Black Democrat is the head killer in charge, allowing the likes of Ed Schultz, Bill Maher and Juan Cole to endorse the criminal assault on Libya. When the chips are down, fraudulent anti-war liberals show their true racist, Manifest Destiny-loving colors. “The true anti-war movement must reawaken itself and hit the streets in the hundreds of thousands.”

“The desire for America to dominate the rest of the world is prevalent among most of its citizens, regardless of party affiliation.”

Peace loving Americans are few and far between. The vast majority of our citizens see nothing wrong with their government killing masses of people as long as the rationale sounds high minded and noble.

The love of bloodshed is generally connected with the right wing in this country, but nothing could be further from the truth. The desire for America to dominate the rest of the world is prevalent among most of its citizens, regardless of party affiliation. Those citizens differ only on who they want to see doing the dominating. Republicans are ecstatic when a Republican president drops bombs, sends drones on killing missions or occupies other nations. Democrats are equally enthusiastic when one of their own does the same.

Democratic party reaction to President Obama’s military intervention in Libya is but the latest example of the American propensity to exult over government sponsored violence. Obama, like George W. Bush before him, claims that his intervention, no-fly zone, peace mission (take your pick) is being conducted only for the most humanitarian of purposes. The dead bodies belie the claims of dogooderism but those words have a distinct power for people in this country and will always be used as a pretext for someone dying somewhere on the planet.

“The belief in white American superiority affects and infects every policy discussion in this nation.”

The legacy of Manifest Destiny and the belief in white American superiority affects and infects every policy discussion in this nation. The equation of goodness and rightness with white America holds sway very strongly and sadly not just for white people either. The willingness to see white behavior as normative means that foreign policy decisions get a pass precisely at the moment when resistance and skepticism are needed.

No, Barack Obama isn’t white, but he may as well be. He is president precisely because he assured voters that he would not change the complexion of their belief systems. If he didn’t fulfill the deeply ingrained belief that might makes right as long as America, a country thought of as white, is in charge of world affairs, he would never have become the president.

The United States attack on Libya has brought out the worst in this phenomenon. Liberals are gleeful that conservative icon Newt Gingrich backtracked on supporting intervention until the Democratic president actually intervened, but Gingrich is no different than they are.

We now have MSNBC television host Ed Schultz [10] proclaiming “Support for Obama’s Invasion of Libya.” Never mind that Obama has taken great pains to claim that the bombing will be of limited duration and that ground troops will not have a presence there. Schultz seems to be ahead of the president on this one, but his show of support is telling in revealing the true support for American motivations in its interventions abroad. Likewise Juan Cole [11] in an “Open Letter to the Left on Libya” dismisses criticism of the intervention thusly. “I would like to urge the Left to learn to chew gum and walk at the same time,” and adds, “We should avoid making ‘foreign intervention’ an absolute taboo . . .”

“Barack Obama isn’t white, but he may as well be.”

Foreign interventions conducted by the United States should be taboo. Our system is not designed to be in any way humanitarian. Its motives are to say the least suspect and no matter how evil its enemies are made out to be, the evidence of past history should make us suspicious of the arguments in favor of war.

The liberal hawks, like Obama, have no concern for Libyan civilians who are enduring bombing, and exposure to depleted uranium shells which create cancers and birth defects for years to come. This is not conjecture, but has been seen in Iraq and ought to be a reason for anyone who claims to be on the “left” to oppose the actions which bring it to pass.

The true anti-war activist, not just anti-Republican activist, has to raise its voice. The true anti-war movement must reawaken itself and hit the streets in the hundreds of thousands, just as they did in 2003 before the invasion of Iraq. That moment can be recreated, and in a deeper, more honest way, now that a Democrat is the head killer in charge.

Margaret Kimberley‘s Freedom Rider column appears weekly in BAR, and is widely reprinted elsewhere. She maintains a frequently updated blog as well as at http://freedomrider.blogspot.com. [12] Ms. Kimberley lives in New York City, and can be reached via e-Mail at Margaret.Kimberley(at)BlackAgandaReport.com.

how nice obama went to the u.n. for approval f his war…..but i believe that there is another group he might have consulted first ..wait i can’t thnk of it…oh yea the u.s. congress..remember them mr obama?…even w got the ok from them before he went blundering into iraq

Information Filth Dressed Up as News—UN...