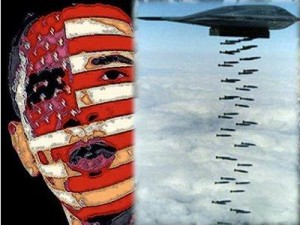 Whatever happens to Moammar Gaddafi, an independent Libya is not on the U.S. agenda. “Obama hopes to ‘stabilize’ Libya under indirect U.S. dominion through a kind of protectorate involving various ‘international’ entities, on the Haitian model.” The president’s doctrine of “humanitarian” warfare – like his rhetoric – is merely a sweetened derivative of George Bush’s more crudely presented policies. “In the final analysis, Euro-American hegemony means crushing the aspirations of all Arabs in the sand.”

“Imperialism’s refreshed Obama-face is looking more than ever like a grotesque Halloween mask, and he knows it.”

In Libya, Barack Obama now faces the central contradiction of his presidency: How to accomplish George Bush’s strategic objective, to wrest back America’s post-Soviet global supremacy – a goal Obama has always, and openly, shared – while avoiding becoming embroiled in another Bush-style “dumb war.” This was the trick that Obama promised he alone was equipped to pull off by adorning the U.S. empire with a new, engaging, articulate, colored “face.”

Obama strains to maintain that prefabricated face in the midst of an explosive and wholly unexpected political earthquake in the Arab world. The United States, as we wrote on March 23 [8], “wants desperately to position itself on the ‘right’ side” of the unfolding Arab Reawakening and, if possible, to “appropriate to itself a section of the ‘Arab revolt.’” Having found – and helped create – that opportunity in Libya, the Americans and their European co-conspirators rushed in with a reenactment of George Bush’s “Shock and Awe” – a “full spectrum dominance” assault involving hundreds of cruise missiles that reminded even Moammar Gaddafi’s worst enemies that, in the final analysis, Euro-American hegemony means crushing the aspirations of all Arabs in the sand.

As the U.S. discovered in 2003, “Shock and Awe” repels as much as it impresses. Like the Bush Middle East/Western Asia offensive that initially targeted over 30 governments for overthrow (including Libya) but got bogged down in Iraq, Obama and the French and British are in danger of having “reached too far.” Imperialism’s refreshed Obama-face is looking more than ever like a grotesque Halloween mask, and he knows it.

“The Americans and their European co-conspirators rushed in with a reenactment of George Bush’s ‘Shock and Awe.’”

The president’s Monday press conference was an effort to reposition the United States, and to readjust his own face to the Arab world. The lull that followed in “coalition” air strikes on Gaddafi forces, which allowed battered Libyan units to retake ground briefly held by the highly disorganized and foreign-dependent rebels, could serve as a means for the U.S. to squeeze the bravado out of the Benghazi-based fighters – a kind of discipline by denial. Despite the West’s boundless praise for these purportedly democratic “freedom fighters,” the imperial plan does not include allowing them – whoever they are – to form a regime with authority over the country. More cautious elements within the Obama administration may have arrived at an accommodation with NATO member Turkey, whose own interests in the region are incompatible with those of the British and French – and, ultimately, the United States.

Obama acknowledged that the all-out assault on Libya too overtly resembles Bush-style regime change: “To be blunt,” he said, “we went down that road in Iraq…. That is not something we can afford to repeat in Libya.” Yet, regime change is a defining privilege of imperialism and, therefore, Obama reiterated that the American position is that Gaddafi must go.

The contradiction, which causes Obama grief in Manifest Destiny America, is exponentially more acute in the midst of the Arab Re-Awakening. The president’s carefully crafted language indicates that Obama hopes to “stabilize” Libya under indirect U.S. dominion through a kind of protectorate involving various “international” entities, on the Haitian model. The key paragraph is:

“Gaddafi has not yet stepped down from power, and until he does, Libya will remain dangerous. Moreover, even after Gaddafi does leave power, forty years of tyranny has left Libya fractured and without strong civil institutions. The transition to a legitimate government that is responsive to the Libyan people will be a difficult task. And while the United States will do our part to help, it will be a task for the international community, and – more importantly – a task for the Libyan people themselves.”

“Obama hopes to draw an illusory line between his and Bush’s worldviews, that will be palatable to a new an emboldened Arab audience.”

This is not a formula for rule by the Benghazi crowd, whose Islamist elements are indigestible, if not anathema, to U.S. policymakers and image-spinners. It is a rationale for a long, Haiti-like occupation under a compliant United Nations or improvised multi-national façade. Arab nationalism cannot be allowed free rein anywhere, since imperial rule abhors all nationalisms but its own.

Since the campaign days, Obama has struggled to infuse his deceptive rhetoric – which is really all that separates him from Bush – with the language of “Responsibility to Protect,” or R2P [3]. Cloaked in the cynical camouflage of “humanitarian” objectives, Obama hopes to draw an illusory line between his and Bush’s worldviews, that will be palatable to a new an emboldened Arab audience. It is a doomed mission, not only because of the inherent contradictions between Arab aspirations and imperial dominance, but because American rulers are incapable of speaking to a warlike U.S. nationalism and addressing Arab aspirations at the same time. Secretary of State Hillary Clinton, the top U.S. diplomat, cannot even maintain the discipline of a consistent lie. She admitted that widespread bloodletting by Gaddafi’s forces was a fantasy and invention:

“I know that the nightly news cannot cover a humanitarian crisis that thankfully did not happen, but it is important to remember that many, many Libyans are safer today because the international community took action.”

There was no humanitarian crisis, and it will become increasingly impossible to frame the Euro-American assault in North Africa as anything other than an imperial offensive, designed to keep the Arab world in its place and to usurp African sovereignty over the continent’s resources.

BAR executive editor Glen Ford can be contacted at Glen.Ford@BlackAgendaReport.com [9].