What else could we expect from a corporate Democrat? President Obama Treats Tax Dodging GE’s Immelt Better than Consumer Protecting Elizabeth Warren

In The Public Interest
Open Letter to President Barack Obama 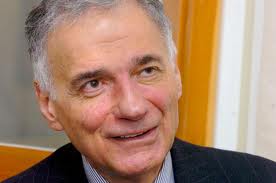 Nader: Often reviled (even by liberals), and ignored, but always spot on.

By Ralph Nader
April 1, 2011
Dear President Obama:
An interesting contrast is playing out at the White House these days — between your expressed praise of General Electric’s CEO, Jeffrey R. Immelt and the silence regarding the widely desired nomination of Elizabeth Warren to head the new Consumer Financial Regulatory Bureau within the Federal Reserve.

On one hand, you promptly appointed Mr. Immelt to be the chairman of the President’s Council on Jobs and Competitive, while letting him keep his full-time lucrative position as CEO of General Electric (The Corporate State Expands). At the announcement, you said that Mr. Immelt “understands what it takes for America to compete in the global economy.”

Did you mean that he understands how to avoid all federal income taxes for his company’s $14.2 billion in profits last year, while corralling a $3.2-billion benefit? Or did you mean that he understands how to get a federal bailout for GE Capital and its reckless exposure to risky debt? Or could you have meant that GE knows how to block unionization of its far-flung workers here and abroad? Perhaps Mr. Immelt can share with you GE’s historical experience with lucrative campaign contributions, price-fixing, pollution and those nuclear reactors that are giving people fits in Japan and worrying millions of Americans here living or working near similar reactors.

Compare, if you will, the record of Elizabeth Warren and her acutely informed knowledge about delivering justice to those innocents harmed by injustice in the financial services industry. A stand-up Law Professor at your alma mater, author of highly regarded articles and books connecting knowledge to action, the probing Chair of the Congressional Oversight Panel (COP) and now in the Treasury Department working intensively to get the CFRB underway by the statutory deadline this July with competent, people-oriented staff.

There were many good reasons why Senate leader Harry Reid (Dem. Nevada) called Professor Warren and asked her to be his choice for Chair of COP. Hailing from an Oklahoman blue-collar family, Professor Warren is just the “working class hero” needed to make the new Bureau a sober, law-and-order enforcer, deterrer and empowerer of consumers vis-à-vis the companies whose enormous greed, recklessness and crimes tanked our economy into a deep recession. The consequences produced 8-million unemployed workers and shattered trillions of dollars in pensions and other savings along with the dreams which they embodied for American workers.

Whatever you do, don’t hold your breath.

Much more than you perhaps realize, millions of people who have heard and seen Elizabeth Warren rejoice in her brainy, heartfelt knowledge and concern over their plight. They see her as just the kind of regulator (federal cop on the beat) for their legitimate interests in a more competitive marketplace who you should be overjoyed in nominating.

Yet there are corporate forces from Wall Street to Washington determined to derail her nomination — forces with their avaricious hooks into the Republicans on Capitol Hill and the corporatists in the Treasury and White House.

You have obliged these forces again and again over the last two years, most recently with the appointment of William M. Daley, recently of Wall Street, as your chief of staff.

How about one nomination for the People? The accolades on hearing the news of Elizabeth Warren’s nomination may actually exceed the enduring indignation were she not to be nominated. Just feed the Senate Republicans to the mass media that would cover the nomination hearings, all that calm, solid, wisdom and humanity that she communicates without peer. See who prevails.

Selecting Elizabeth Warren and backing her fully though the nomination process will always be remembered by Americans across the land. Not doing so will not be forgotten by those same persons. This is another way of saying she has the enthusiastic constituency of “hope and change” — that is “change you can believe in!”*

I look forward with many others to your response.

*If you doubt this observation and would like to see one million Americans on a petition favoring her selection, ask us and see how long that would take.