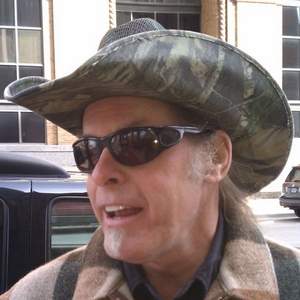 David Doel and David Pakman file reports on the latest...

In the early 90s, I attended a taping of the Sally Jesse Raphael show on which Cleveland Amory, Wayne Pacelle (still with the Fund for Animals at the time), and Ted Nugent were guests. At the time, Ted’s son who was about 3yrs old, and his blond bimbo wife (not to be confused with Bimbo bread) sat in the audience. Ted bragged how he was teaching his killer kid to practice bowhunting on small farm animals in his barn! Good going, Ted – I bet that little darling is quite a killer Fudd by now! During an intermission, bimbo wife piped up and said that deer deserve to die because they’re such bad parents…apparently she had observed a doe with her fawn – the doe kept pushing the fawn away from a branch on which she was nibbling, and that constituted a “bad mother” that deserved the death penalty!

The bow hunting thing really is an abomination. I despise those motherf@@@@@s. I have a nephew who is obsessed with that. I firmly believe he likes bow hunting, as opposed to using a rifle, because the animal dies a slow, lingering death, which he enjoys watching. Bow hunting shitasses like him and Nugent are an aberrant species. The baiting thing really rests with the needs of bow hunters. They need to bait an animal within range of their medieval weapons in order to hit them. Having no real hunting skills, they would never be able to close enough to hit them. Even within a bow hunter’s shooting range, they typically send their little pointed sticks into an animal’s rump, gut or some other non-vital area. In fact, over 50% of the animals struck by an arrow are never found. It takes little imagination to know the agony that animal must suffer as it slowly dies from starvation and thirst over a period of days if not weeks.

Bowhunting causes about 55% of deer that have not been tracked and retrieved by bowhunters more than just minutes, hours, days or weeks of torturous lives – it can be months, and even years, depending where the arrows struck! They die of starvation, dehydration, sepsis, bleeding, etc.
There are 22 studies (http://www.animalrightscoalition.com/doc/bowhunting_report.pdf), of bowhunting wounding rates. However, since hunters aren’t like fishermen who always talk about “the one that got away”, the reported numbers to wildlife agencies are unrealistically low! See:The Evils of Bowhunting – The Story of Braveheart the Deer – who lived almost a whole year (http://www.youtube.com/watch?v=zLGF9pOUV10) !!!!

Thank you for this article. I’m sick every time I hear Nugent’s name. He is a sadist.
I would not shed a tear if he were accidentally impaled by some of the weapons he uses to torture and kill animals.

He’s also an abominable coward. He avoided serving in Nam by way of a strategem. I guess fighting animals who can fight back is not his cup of tea. A disgusting piece of scum. How many of his adoring fans know that, or his fellow macho hunters? I suppose he doesn’t brag about that, but it’s a matter of record.

This scumbag’s “fans” feel exactly the way he does about torturing animals; he has a huge “sportsmen” following, and the radical and extreme “right” – a bunch of cowards like their idol!! I doubt that there are still any music fans around!

I heard it’s bow-hunting season on Ted Nugent. Anyone care to join me?

cowards are u that sit in a warm little house in the middle of woods and wait to see a deer hundreds of yards away and then shoot it wheret is the sport in that don’t mix up true bow hunters with weekend bowhunterswe take aim and put our arrows where they kill not wound or we don’t take the shot u guys piiss me off go read how ur hamburger or ur chicken is treated and then killed don’t knock somthin u no nothing about and. for u vegans out there might wanna see how ur veggies and tofu is treated to