Redressing a huge miscarriage of justice, and showing that all justice is political. 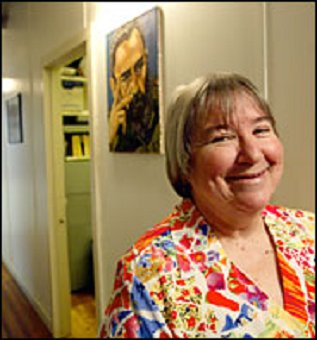 OK, so Lynne Stewart is no Hollywood cutie. Her beauty is of a different sort.

NUMEROUS previous articles discussed her case, character, honor, and dedication to justice as the law demands, what it didn’t afford her. Two of them covered her imprisonment and re-sentencing, accessed through the following links:

A brief timeline of her case was as follows:

¶ indicted on April 9, 2002;
¶ on February 10, 2005, convicted on all counts;
¶ on October, 17, 2006, sentenced to 28 months;
¶ on November 17, 2009, a US Court of Appeals for the Second Circuit three-judge panel upheld the conviction, shamelessly accusing Lynne of “knowingly and willfully making false statements,” re-directing her case to District Court Judge John Koeltl for re-sentencing, instructing him to consider enhancements for terrorism, perjury, and abuse of her position as a lawyer – an outrageous mandate intimidating Koeltl to comply.
¶ on November 19, 2009, Stewart jailed at MCC-NY, 150 Park Row, New York, NY; and
¶ on July 15, 2010, Stewart re-sentenced to 10 years imprisonment for doing her job honorably, ethically, and admirably with distinction for 30 years.

With Margarita Rosario and Cindy Sheehan.

“(C)omments by Stewart in 2006, including a statement in a television interview that she would do ‘it’ again and would not ‘do anything differently’ influenced (the) decision….indicat(ing) the original sentence ‘was not sufficient’ to reflect the goals of sentencing guidelines.”

Forgotten were his October 2006 comments, calling Lynne’s character “extraordinary,” saying she was “a credit to her profession,” and that a long imprisonment would be “an unreasonable result,” citing “the somewhat atypical nature of her case (and) lack of evidence that any victim was harmed….”

He also considered her age (70), health (at times poor), distinguished career representing society’s disadvantaged and unwanted, and the unlikelihood she’d commit another “crime.” However, the Second Circuit Appeals Court intimidated him to comply, his own career perhaps on the line otherwise.

Initially jailed in New York, supporters can now reach her at:

Her full appeal brief can be accessed through the following link:

Her web site – www.lynnestewart.org – summarizes it as follows:

It was filed with the Second Circuit Appeals Court. “The same panel (Judges Walker, Calabrese and Simon) will” re-hear her case this fall. If unsuccessful, a Supreme Court appeal may follow.

¶ enhancing her original 28 month sentence based on public statements she made violated her First Amendment rights, the most important ones without which all others are jeopardized;
¶ increasing her sentence fourfold constitutes cruel and unusual punishment, violating Eight Amendment protection against it; moreover, it “failed to balance her lifetime” commitment to community, the nation, and society’s poor, underprivileged, and unwanted, never afforded justice without an advocate like her; and
¶ erroneously charging perjury and misuse of her position to enhance her sentence.

Lynne asked for a reversal and remand. She’s represented by New York-based lawyers:

In addition, many other lawyers and supporters helped prepare her appeal, including husband and spokesperson, Ralph Poynter, available at 917-853-9759.

Lynne calls her case “bigger than just me personally,” saying she’ll keep fighting for justice. Her inspiring comment to others is:

Senior Contributing Editor Stephen Lendman lives in Chicago and can be reached at lendmanstephen@sbcglobal.net. Also visit his blog site at sjlendman.blogspot.com and listen to cutting-edge discussions with distinguished guests on the Progressive Radio News Hour on the Progressive Radio Network Thursdays at 10AM US Central time and Saturdays and Sundays at noon. All programs are archived for easy listening.

SATIRE: Next Season on Survivor